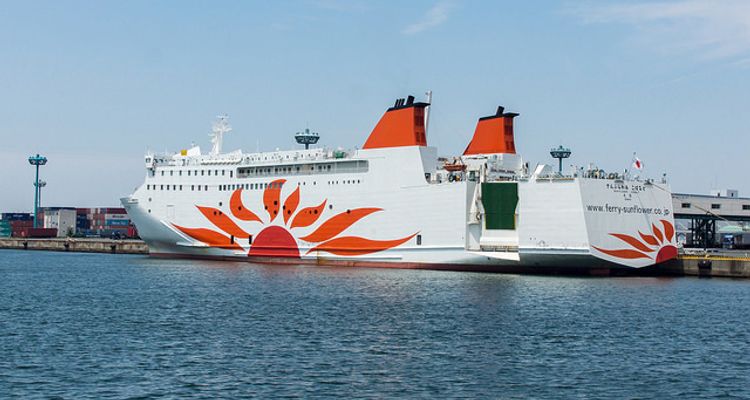 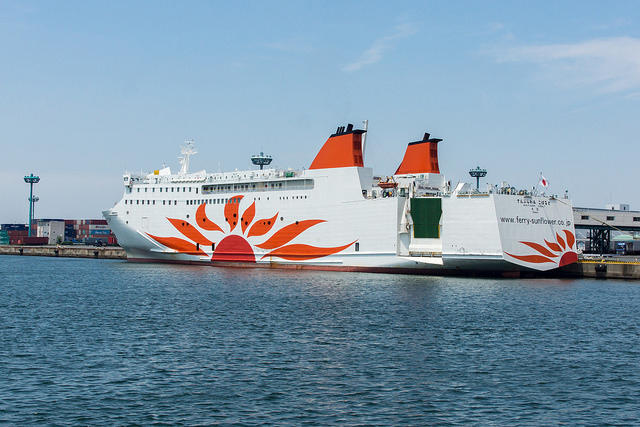 Sailing is not the fastest way of transportation, but can be convenient and offer lower cost than those overland or airway. You can even plan your trip more effectively by combining them. Overnight trips or short trips, why not expand your trip by sea if your time permits? The on board service of Taiheiyo Ferry is quite gorgeous for a regular line in Japan. It sails 1330km for 40 hours from Nagoya to Tomakomai in Hokkaido via Sendai. You will enjoy not only comfortable overnight trip but their live entertainment including music or shows for free. Two consorts passing very closely between Nagoya and Sendai route is also a spectacle. Transportation, accommodation and entertainment cost only from 10,000yen at the cheapest. This is the 19-hour-sailing between the Metropolitan area and Tomakomai, Hokkaido. There are two services per day, evening and midnight departure. The port of embarkation in the Metropolitan area is Oarai, Ibaraki, approximately 110 minutes from Shinagawa station. Tomakomai is about 90 minutes by train from Sapporo. It would sound too much transit for business person. If you are a tourist, you can add the Kairakuen Garden or Aquaworld, an aquarium, in Ibaraki to your list. The Izu Islands, rich in unique nature, is also a part of Tokyo. The closest Oshima Island can be reached in 1 hour and 45 minutes by jet ferry from the Takeshiba terminal (10 minutes from JR Hamamatsucho station). It takes 10 hours and 20 minutes to the Hachijojima, the farthest island at 287km south from Takeshiba. There are several routes operating among the area including the Izu Peninsula. You can organize an exciting round trip by combining transportation overland and by sea. Tokyowan Ferry or the Tokyo Bay ferry is a nice option to explore the region surrounding the Tokyo Bay. This cross bay route connects the 11.5km between Kanaya in the Boso Peninsula, Chiba prefecture and Kurihama, Yokosuka for 40 minutes. The service is frequent and you can bring your vehicle or bicycles onboard. The one-way fare of 720yen is a great value considering the view from the open-air observation deck in a beautiful day. This route connects Tokyo and the north Kyushu, the Shinmoji Port, via Tokushima for 11 hours. There are two types of boats: a “casual ferry” consisting of second class accommodation of bunk beds only and a “standard ferry” of several types. All boats don’t have any dining room but food and drink vending machines galore. The fare between Tokyo and Tokushima starts from 10,000yen and another between Tokyo and Kitakyushu does from 15,000yen.

The route between Osaka and Kitakyushu is quite popular as it cross the scenic archipelago, the Setouchi Inland Sea. The large bridges lit-up at night or the relaxing moment in a morning breeze attracts the passengers. There are two companies operating between Osaka and the Shinmoji Port, Kitakyushu. Meimon Taiyo Ferry, one of them, embark at the Nanko Port, 35 minutes from Namba station in Osaka. A new ship which went into service on September, 2015 is beautiful with cheerful colors and comfortable with well-designed facilities. The cost starts from about 6,500yen The other company operating between Osaka and Kitakyushu is Hankyu Ferry. This line embark at the Izumiotsu Port, Osaka connected by shuttle bus from Namba station. They operate between Kobe and Kitakyushu as well. This company also have a new ship debuted on January, 2015. The interior has chic atmosphere and it comes with outdoor bath. The upper class cabins of both companies’ new ships compare favorably with rooms at regular hotels. The fare starts from around 7,000yen. This company operates between the Nanko Port, Osaka and Beppu/ Kagoshima and between Kobe and Oita. The Osaka-Kagoshima route sails in ocean and the sea is rougher than the inland sea. But a magnificent view can be expected. The sunrise and the sunset over the horizon is exclusive. The fare between Osaka and Beppu starts from 11,000yen, and between Osaka and Kagoshima does from 13,000yen. It’s a great value considering that accommodation and transportation are included in the price. The Miyazaki Car Ferry sails between Kobe and Miyazaki by the open sea. The terminals are convenient for passengers without vehicle in both sides. The Kobe terminal can be reached for 10 minutes by shuttle bus from the Sannomiya station, and the Miyazaki terminal is reached for 15 minutes by regular bus service. The fare starts from 10,000yen. The routes on the Japan Sea side offer somewhat different views from the Pacific Ocean side. The sail between the north of Kansai and Hokkaido (Maizuru – Otaru, Tsuruga – Tomakomai) enables you even to pop into Toyama and pop out from Sapporo by flight. You can hop around the ski resorts or hot springs utilizing the service between Niigata and Otaru via Akita. Please note that some line would be suspended due to periodic check. Maruei Ferry connects approximately 1,300km between Kansai and Okinawa region (Naha and the Amami Islands) for around 19 hours. It also sails between Kagoshima and Okinawa region. The boats come with shared shower rooms except the first class cabin with private shower room. The fare between Osaka/ Kobe and Naha starts from 19,330yen. The fare between Kagoshima and Naha does from 14,610yen. Though the service is susceptible to the adverse weather conditions, the views from the deck on the Kagoshima route can be breathtaking.

The cheapest accommodation on most of long-distance boats is shared open space. Carpeted rooms are basically equipped with pillows and blankets without bed. Mattress or storage shelves are not always guaranteed. If you want to make your trip on budget or look for a chance to communicate with people, this is a nice option. If you prefer to enjoy comfort and privacy, you'd better avoid this class. Some ships have cabins for women.

Most of long distance ferries only have public big bath unless you stay at a room with private bath or shower room. Public baths and lavatories are usually clean and comfortable. Though many ships have restaurants in buffet or canteen style, you can bring foods on your own as well.