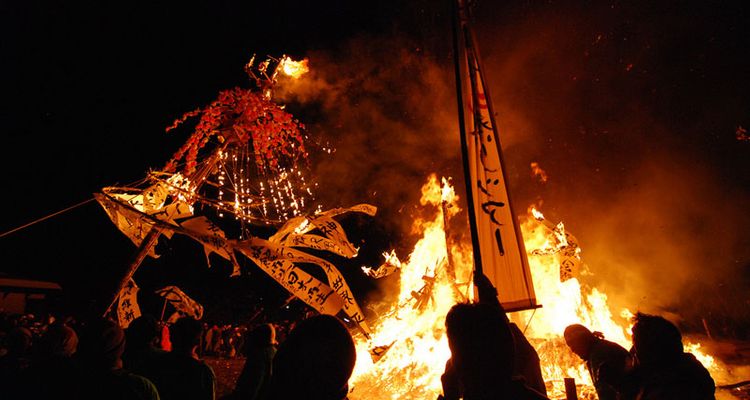 There are three reknowned fire festivals in Japan. One of them is Dosojin Festival in Nozawa, Nagano. It is quite popular among foreign tourists. So what exactly is Dosojin Festival? Here we look at its origin and its highlights.

In recent years Nozawa Onsen Village has become a popular skiing resort among foreign travellers and  every year in January the famous Dosojin Matsuri (The Nozawa Fire Festival) takes place in the area.

'Dosojin' is a popular stone deity seen at the likes of village borders and crossroads across Japan. It is said to protect people from accidents and calamities. Dosojins are also prayed for children's health as well as heaven-sent pregnancy throughout the nation as folklore deities.

Dosojin Festival is administered by a group called 'Sanyakou', which consist of  men who are of ages regarded as unlucky.  They are 40, 41, and 42 year-olds, respectively, and carry out the duty for 3 consecutive years.  In addition there are other male members in Sanyakou who are 25 years of age, which is also seen as unlucky. Each year the team is led by the leader who is a 42 year-old.

Dosojin Festival takes place annually on the 13th, 14th and 15th of January with invocation for good health and happy marriage for the local children and  peace of the village.  The festival is listed as one of the nation's important tangible folk culture assets. The highlight of the festival is when the fire is set to the shrine, which is more than 20 metres in height. You can see the fire and even feel the heat of sensation from a distance. It is common to see men getting burn scars as they take part in a battle involving blazing torches. The battle could get rather overheated and quite a few participants get injured every year.

Dosojin Festival is seen as a ceremony for the local men to go through and to be acknowledged as 'the man of the village'. This is why male participants put so much energy and passion into it.

As the population of non-Japanese tourists grew, Nozawa Onsen Village has become rather relaxed in various ways such as permitting guests to wear swimsuits at spa facilities.

Visitors can enjoy Japanese style of spa (onsen) as well as skiing to their heart's content.

We cannot recommend more to plan your skiing trip to Nozawa to coincide with the timing of Dosojin Festival and to immerse yourself into the  local hereditary culture.