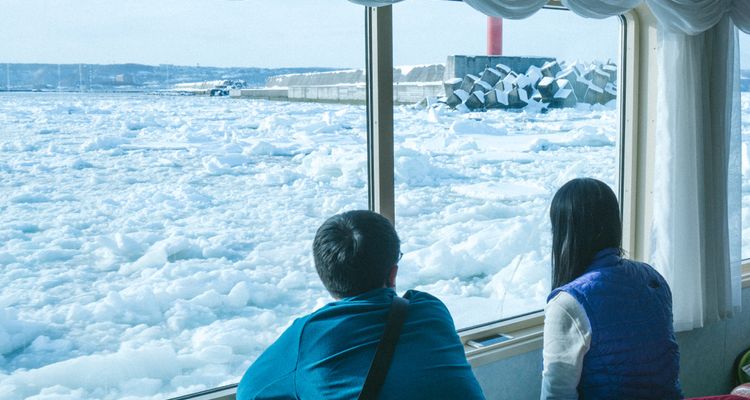 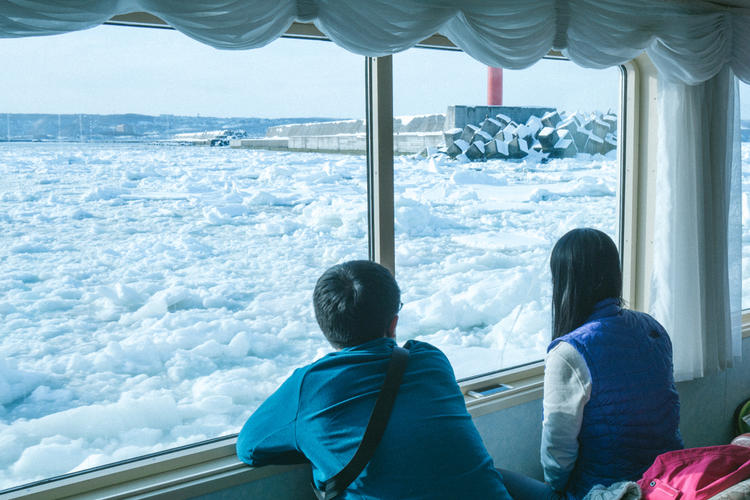 When the majestic nature teams up with the extreme weather of Hokkaido, pure magic can often happen. It is especially true during the winter, with its snow, frost and ice. Here is a list of some of the extraordinary phenomena that can be witnessed in the winter wonderland of Hokkaido.

Tiny particles of ice crystals, created by the frozen moisture in the atmosphere, is called diamond dusts.  Rightly so, when they glitter and twinkle against a clear blue sky under the sunshine.  Diamond dusts appear when the temperature is below -10C/14F, on a clear day, combined with several other particular conditions.  They are witnessed several times a year in the inland area of Asahikawa and Tokachi. When the droplets and mists on the branches freeze, they can turn the entire trees into crystal white wonders.  This phenomenon can be seen in just about everywhere in Hokkaido, but around the lake Mashu, Tokachi and Mt. Daisetsu are particularly famous for the majestic frost covered trees.  The trees can take on various shapes depending on the amount of snow, and they create a fairy tale like scenery. The sea surface of the north-eastern Hokkaido becomes icy due to its extreme temperature.  From January to March, you can walk on the frozen sea, or put on a diving gear and swim among the floating ice.  Shiretoko peninsula is especially famous for large blocks of ice floe, you can also admire the scene from the coast. When the ice crystals among the clouds reflects the sun light, it creates a brilliant spot in the sky that looks like a second sun.  You will see a luminous ring around the sun, sometimes two phantom suns (or a.k.a. sun dogs, or mock suns) can be found on the perimeter, or just one phantom sun away from the ring.  This phenomenon may be spotted anywhere in Japan, however phantom suns only appear in an extremely low temperature, so Hokkaido is a great place to spot them. When the moisture of the sea/river surface meets an extremely cold temperature of the atmosphere, below -20C/-4F, a special type of fog is formed. It is called “Kearashi” in the local dialect.  The unique phenomenon of a thick steam rising up from the sea can be observed along some of the coastal regions such as Kushiro and Rumoi. Stunning effect of the hectagonal ice crystals in the atmosphere reflecting on the rising or setting sun, creating an illusion of a brilliant column in the sky.  The condition needs to be still without wind, and in an extremely low temperature.  Mt. Piyashiri near Nayoro is a famous spot to observe this phenomenon. When the vapors near the surface of a lake crystalize themselves due to the low temperature, they form curious shapes resembling flowers.  The temperature needs to be below -15C/5F, the ice surface must not be too thick, it takes a highly specific condition for the frost flowers to appear.  In Hokkaido, the lake Akan and the lake Kussharo are especially famous for their frost flowers.。 When the atmospheric refraction plays a trick at sunrise or sunset, the sun takes on a curious shape.  It takes a considerable gap between the temperatures of the atmosphere and the surface of the sea for this to happen.  The shape keeps changing before your eyes as the sun rises, or sets, it is almost like observing a UFO!  In Hokkaido, along the coastline of the Okhotsku, such as Notsuke peninsula, is an ideal location to observe this spectacle. When the moisture inside the clouds near the sun reflects the light, they take on stunning rainbow-like colors.  The phenomenon is so strikingly beautiful, it was believed to be a good luck charm since the days of yore.  It happens in the early morning on a pure, clear day.  Not terribly uncommon in Hokkaido, so you will have a fair chance of getting a glimpse of this beauty if you are an early riser. Curious form of snow roller, like giant, white swiss rolls, may remind you of a work done by goblins or fairies.  But there is a scientific explanation.  When a thin layer of fresh snowfall gets blown by the wind, the surface gets lifted and start rolling down the hill.  It it is a rare phenomenon, which can be occasionally seen in the in the inland area of Hokkaido. (Photo is for illustration purposes.)