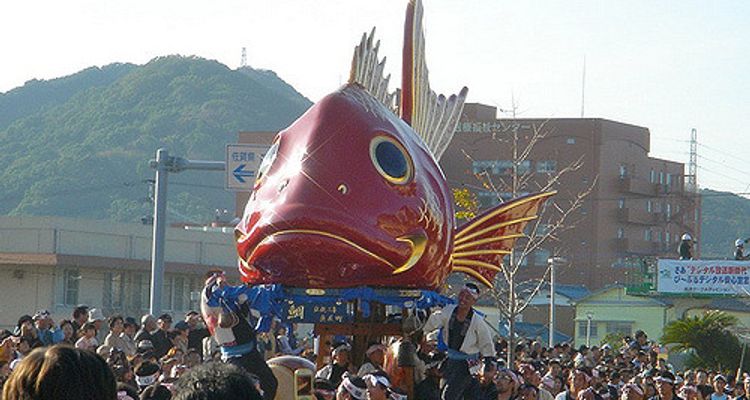 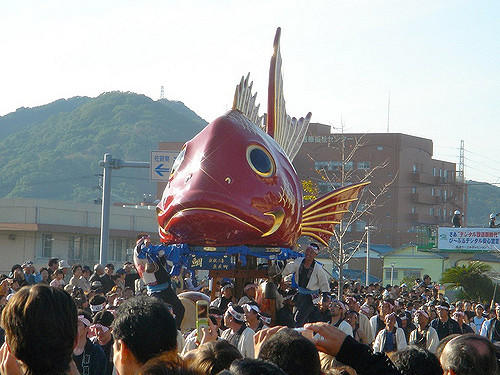 The Karatsu Kunchi is a major festival held in Kyushu which is also an important folk cultural property.

One of the major and most important festivals in Japan, the Karatsu Kunchi, has more than 400 years old of history. Unlike many other major festivals held in Japan, Karatsu Kunchi uses the word “kunchi” for "festival" rather than the more widely used "matsuri".

Karatsu Kunchi is a cultural festival held in Karatsu City on Kyushu. It is a three-day festival which begins every year on November 2nd.

The main attraction for this festival is the parade of the 14 historical floats, known as the hikiyama. The floats featured are huge with the largest standing at 6.8 meters tall and weighing about three tons. Akajishi, the red lion, is the oldest hikiyama, having been built in 1819. It is presented by Katanamachi.

Aojishi, the blue lion, was built in 1824 and is presented by Nakamachi.

Turtle and fisherman Taro Urashima was built in 1841 and presented by Zaimakucho. Tai, sea bream, was built in 1845 and presented by Uoyamachi.

These hikiyama are made from wood, sheets of Japanese traditional washi paper, clay, and linen. The floats are then lacquered and finished with gold and silver leaves. Each hikiyama takes between two and three years to be completed. The 14 hikiyama used for Karatsu Kunchi were offered to the Karatsu Shrine between 1819 and 1876.

Samurai warrior Yoshitsune Minamoto's helmet was built in 1844 and is presented by Gohukumachi. Hou-ou Maru, the phoenix ship, was built in 1846 and presented by Oishi-machi.

These gigantic floats are designed in the images of lions, grampuses, samurai helmets, sea bream, and flying dragons called hiryo, and deserve to be described as artistic masterpieces. The oldest surviving float is the Akajishi , the red lion, which was produced back in 1819; it has since undergone major repairs 6 times, and still retains its original form to this day. The floats are normally displayed at the Hikiyama Float Exhibition Hall adjacent to Karatsu Shrine (admission charged). If you happen to be visiting this region, you might wish to have a good look at the designs of the floats. Hiryu, the flying dragon, was built in 1846 and presented by Shinmachi. Kinjishi, the golden lion, was built in 1847 and presented by Honmachi.

The first day of the festival is the eve event on November 2. A special mood prevails as the 14 hikiyama, decked with paper lanterns, are pulled around the town. Lit by lanterns on an autumn evening, the hikiyama create a magical scene.

Samurai Lord Shingen Takeda's was built in 1864 and presented by Kiwatamachi. Samurai Lord Kenshin Uesugi's helmet was built in 1869 and presented by Hiranomachi.

On the second day, with the portable shrine of Karatsu Shrine leading the way, the hikiyama are pulled to Nishinohama, a sandy beach. The sight of people hauling the huge floats through the sand is an epic spectacle.

Shuten Doji , the drunken monster, and samurai Yorimitsu Minamoto's helmet was built in 1841 and presented by Komeyamachi.

Tamatori Jishi, the lion balancing a ball, was built in 1875 and presented by Kyomachi.

On the third day, teams dressed in the traditional uniforms of Edo Period (1603-1868) firefighters pull the hikiyama through their neighborhoods. This is the day on which these floats are returned to their storage building, the Hikiyama Float Exhibition Hall. Regretful that the festival has ended, the participants playact as they are reluctant to put their floats away and a sorrowful feeling fills the air. Shachi, the tiger-headed orca, was built in 1876 and presented by Kakomachi.