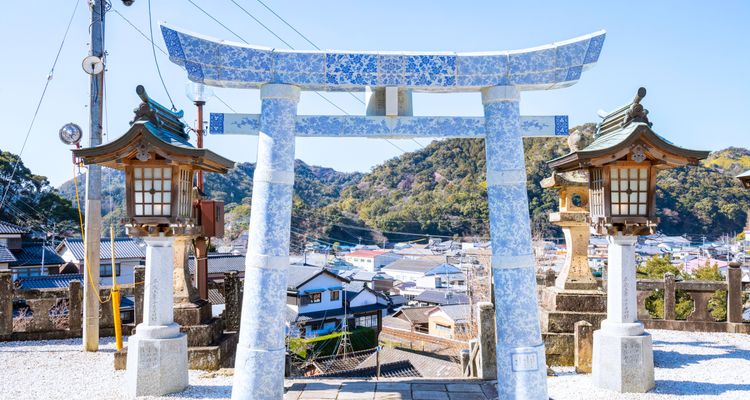 Located in northwestern Kyushu, Saga Prefecture is not only blessed with a plethora of natural wonders and historical sites, but it has also been renowned since ancient times for the production of refined ceramics. As an acclaimed site for pottery production and the birthplace of Japanese porcelain, Saga houses three ceramic villages that keep the local artistic heritage thriving. Some of these unique villages are hidden in mysterious mountains while others are embellished with decor made of elegant porcelain, so take a trip to Karatsu, Arita, and Imari and get ready to discover Saga's world of ceramics!

Dotted with traditional buildings and pottery workshops, Arita is a quaint village surrounded by lush wooded mountains. Its historical relevance lies in the fact that it was the first place in Japan to produce porcelain when kaolin, the clay mineral required to make porcelain, was discovered here at the beginning of the Edo period in 1616. Arita's artisans have been crafting masterpieces since then, with Arita ware boasting about 400 years of illustrious history and fortune. The exquisite Arita ware was so appreciated (and still is) that it wasn't only produced for the domestic market but also imported to China and Europe, resulting in great prosperity for the town!

Early pottery made in Arita mostly used underglaze blue decoration, but by the mid-17th century, Japan developed overglaze decorations made with enamel, adding to the local porcelain a wide range of color options such as red, yellow, purple, and green. Some pieces even make conspicuous use of golden details. Today, Arita ware encompasses a variety of styles, from simple yet elegant white porcelain covered with a glassy translucent glaze to underglaze cobalt blue porcelain and even polychrome enamel porcelain distinguished by its bold designs and bright colors.

Considered some of the finest porcelain in Japan, Arita ware is not only recognized for the amount of craftsmanship that goes into realizing it, but it is also prized for being thin, light yet solid, and durable. For this reason, it's appreciated for the production of tableware.

This unique shrine made of Arita's porcelain is proof that the art of ceramics is rooted in the village's cultural heritage. Tozan Shrine displays the local, iconic white and blue porcelain on many of its sacred buildings, including the elegant "torii" gate at its entrance, some delicate lanterns, and "komainu" lion statues that serve as guardians for the shrine. Here, visitors can also buy some unusual "ema" plaques for prayers and "omamori" lucky charms that are entirely made of Arita ware and present intricate cobalt blue designs on pure white porcelain.

Nearby many of Arita’s traditional buildings and porcelain workshops are the Tombai Walls. The earthy tones of the walls not only complement the picturesque alleys of Arita and the surrounding forested mountains, but also have a really interesting history. Made from pottery scraps and what were once firebricks of kilns coated in red clay, these unique walls once again prove the strong connection between Arita and its refined pottery. The alleys surrounding the Tombai Walls are the perfect place to stroll around, enjoy Arita's natural scenery, and discover the fascinating artwork of local artisans working in their workshops.

This theme park with a cultural twist is a replica of a German village centered around an 18th-century baroque palace embellished by a European-style garden. As visitors get to admire both European porcelain and Arita ware in the permanent exhibition, Arita Porcelain Park presents a fun way to learn about Arita ware's history and its influence on European art and ceramics. The park is a great spot to visit with the whole family and try new experiences like porcelain making and relax in the facility's restaurants and cafes.

The production of high-quality porcelain that started at the beginning of the Edo period involved the entire area of Arita and its surroundings, including the neighboring town of Imari. Imari Port became the main shipping point for the local ware which was shipped to Europe and China to be sold as a luxury product. During the peak of porcelain production, Imari was filled with artisans and merchants. Some of those traditional merchant houses were preserved and are now open to visitors, contributing to the town's traditional atmosphere.

As the porcelain crafted in the area was mainly shipped from Imari Port, the local ware first became known overseas as Imari ware. This style of Japanese pottery had such a huge artistic impact abroad that it was even copied by overseas craftsmen.

To distinguish between the increasing number of styles, multi-colored or enameled wares started to be defined as Imari ware while blue and white wares were called Arita ware, despite the fact that they were often produced at the same kilns. Today, it's more common to see it described as Arita ware, or Hizen ware (from the old name of Saga Prefecture), regardless of the exact production site.

Okawachiyama is a fascinating, tiny village hidden in the mountains not far from Imari. Completely surrounded by high forested peaks, it's probably one of the most secluded places in Japan. Its unusual location has historical reasons, as the village was intended as a secret production site for precious porcelain. During the Edo period, porcelain produced in this area was considered of superior quality, so Saga’s ruling Nabeshima Clan decided to build the village in this isolated and well-defended valley. The village hasn't changed much since then, so visitors can still enjoy the original chimneys of the kilns dotting the townscape, pottery workshops, and porcelain decorations.

Built inside the renovated house of an Edo period merchant, this museum offers an interesting glimpse into the daily life of Imari's merchant class from a bygone era. The white-walled buildings display the typical architecture for local merchant houses and date back to 1825. They were originally owned by the Inuzuka family, some of Imari's most famous pottery merchants. The museum displays valuable Imari ware dating back to the 18th and 19th centuries.

Not far from Imari Station, it's possible to enjoy a lovely stroll among some unique porcelain decorations that embellish the town with a pop of color! Visitors can head towards Aioi Bridge to spot the famous automated Koimari Clock made of Imari porcelain or cross the bridge to find a sumptuous decorative porcelain jar standing on the side of the walking path. Wandering around the town, visitors are sure to encounter many more of these exquisite decorations made of Imari porcelain. Discovering them one after the other will feel like a treasure hunt!

Being a major stop for ships heading to Korea and China, Karatsu flourished during the Edo period as a powerful castle town. In the Meiji and Taisho periods, the town developed into a coal-mining center. For this reason, Karatsu has a rich samurai culture and numerous historical landmarks dating back to different periods. With an elegant castle on top of a hill facing the sea and numerous preserved traditional residences, the town offers many chances to enjoy historical spots and cultural activities.

Karatsu not only has ancient samurai roots but is also one of Kyushu's main pottery producers. Its history as an important center for the production of prized ceramics dates back to the late Muromachi period (1336-1573). Karatsu ware was considered so refined that it was traded throughout Japan and even became the official ceramics of the Karatsu Domain during the Edo period. Thanks to its simple appearance and subdued colors reminiscent of nature, it's highly appreciated in the world of the Japanese tea ceremony as well as a beloved type of pottery for daily use thanks to its practicality and variety of styles.

Just a short walk from Karatsu Station, visitors can explore the Nakazato Taroemon Kiln and Ochawangama Pottery Museum. The museum reflects the connection between Karatsu ware and tea ware and features works by four generations of Nakazato potters. Through the precious works of this prized family of craftsmen, visitors can learn the history of Karatsu ware and witness its evolution through the centuries, including some very old and valuable pieces. The museum is located inside a traditional building that once was the house of the 12th generation Nakazato Taroemon. Visitors can appreciate the traditional architecture and the family's climbing kiln built in 1734, which is the oldest surviving climbing kiln in Japan.

Karatsu's Kitahata area is considered the birthplace of Karatsu ware. Here, during the 1580s, the Hata Clan, who were residing in Kishidake Castle and ruling over Kitahata, invited Korean and Chinese potters to build kilns and develop the local pottery industry. These potters found out that the clay around Kishidake vitrifies at high temperatures, resulting in hard, impermeable pottery with a unique, rustic texture. They also introduced climbing kilns which increased the quality of the ceramics produced, determining the success of Karatsu ware.

While strolling around Kitahata Koyohmori Park, visitors might encounter several remains proving the history of the local ceramics. Numerous kilns and workshops are still operating in Kitahata and are open to the public, providing the unique occasion to admire the local ceramic culture and tradition.

Saga isn't the only prefecture in Kyushu soaked in history and natural beauty! Be sure to explore the rest of Kyushu to see all the charming places that are testaments to the natural and historic beauty of Japan!