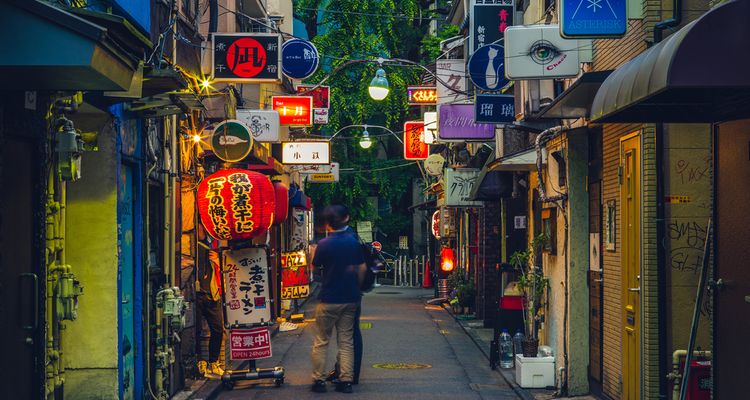 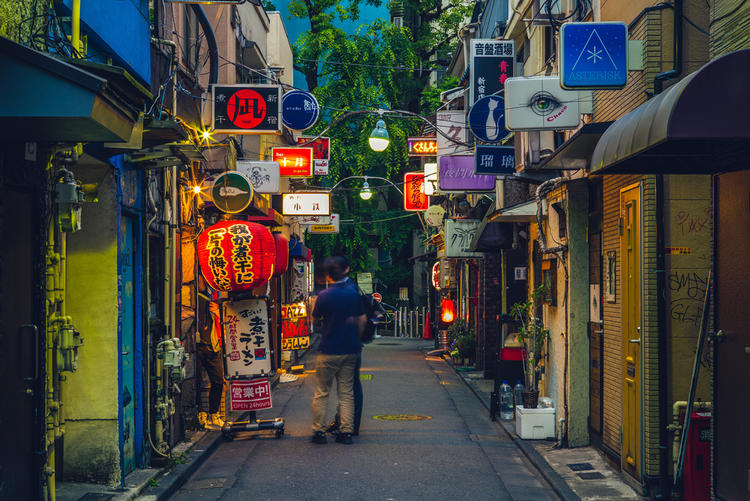 When people picture Japan with its modern skyscrapers and beautiful gardens, they are essentially imagining Shinjuku, one of the most vibrant parts of Japan’s capital. But there is an area located just a short walk from Shinjuku Station’s East Exit in Kabukicho that doesn’t seem to fit: Golden Gai (Golden Town). Composed of six narrow, dimly-lit alleys, this tiny block full of ramshackle, decrepit buildings is home to anywhere between 200 and 300 tiny bars where people literally rub shoulders with each other as they drink the night away. Golden Gai, at first glance, might seem a little sketchy but it’s a living time capsule and an oasis of old-timey charms among the hustle and bustle of Shinjuku. If you want to experience it for yourself, here’s everything you need to know before visiting Golden Gai.

The History of Golden Gai

The history of Golden Gai starts in 1945. Shortly after the end of WWII, the area outside Shinjuku Station’s East Exit became a black market for illicit goods and basic necessities in the war-torn country. The Occupation Forces shut the market down in 1949 but it just moved a little farther away to where Golden Gai is located today. Back then, the area was barren save for a few empty lots and dilapidated or abandoned buildings, but with other purveyors of illegal and contraband goods from around the country slowly moving to the same area, the seeds of Golden Gai have been planted.

During the following years, Golden Gai went through a few changes. Throughout the 1950s, it was a bustling red-light district until prostitution was outlawed in Japan in 1958. After that, it became home to izakaya-style pubs and bars that were especially popular with Japan’s intelligentsia and artists. Apparently, in the 1960s and 1970s, one was not taken seriously as an intellectual unless they had a familiar haunt in the area, which soon became known as “Bunkajin no Machi” (Town of Cultured People). That moniker was soon abandoned in favor of “Golden Gai”, the exact origin of which is unknown, but that’s about as far as the area was willing to change. During the Japanese economic boom of the 1970s, Shinjuku grew and modernized but Golden Gai steadily refused to follow suit, offering a rare glimpse of Tokyo's architectural heritage.

In the late 1970s, land prices in Shinjuku were so high that Golden Gai became a target for organized crime groups. Stories abound about bar owners organizing patrols and standing guard to keep gangsters from burning the block to the ground in order to then buy it cheap. Thankfully, they succeeded, and Tokyo has been culturally richer for it since.

When Japan’s economic bubble burst in the early 1990s, many Golden Gai bars closed down and it looked like the area may never recover. But over the years, a new generation of young entrepreneurs and old clients whose faces were once known throughout this tiny part of Shinjuku stepped in to bring Golden Gai back to life.

Today, Golden Gai is livelier than ever and has become something of Tokyo’s best-known secret. It’s not strange to spot more foreigners squeezing their way through these narrow alleys than Japanese people as they search for the next tiny bar to hit. There are plenty to choose from. Golden Gai is home to anywhere between 200 and 300 drinking establishments, and given the small size of the area, you can probably guess that these aren’t the most spacious locations. A typical Golden Gai bar measures less than 20m2 and can accommodate a maximum of 10 people. Many are much smaller than that, though, with some drinking holes being able to accommodate no more than three or four people at a time.

But even if you go into a Golden Gai bar and find it “packed” (which is a relative term here), you can just go one floor up or a few meters to the side and into a different establishment. When in Golden Gai, a whole different drinking experience is just a few steps or a staircase away. Will the next bar be modern and elegant, themed, or divey and rugged? You never know what you’re going to get. That’s one of the main appeals of Tokyo’s most cramped drinking district… but definitely not its only one.

The Allure of Golden Gai

There is nothing grand about Golden Gai, which stands in the shadows of some of the world’s tallest, modern buildings. But the area is down to earth both literally and figuratively. There’s a kind of honesty and old-world charms to it that is getting harder to find with each passing day. Also, with hundreds of bars to compete with, every Golden Gai drinking establishment goes many extra miles in order to get your business.

Themed bars are a big thing around this small district. Are you into heavy metal? Do you want to drink in a hospital-themed bar? Fan of horror? Looking for something more high-class and refined? Whatever environment you feel most at ease at, it probably exists somewhere in Golden Gai. And while you’re there, you might even run into a celebrity.

Golden Gai may no longer be the "Town of Cultured People" but many artists from Japan and abroad still like hanging out there. It’s ironically easier to disappear in a small place, which is why world-famous performers sometimes like to swing by Golden Gai when touring Japan to see what it's all about. And that, in turn, brings in more people hoping to spot a famous face around these parts. But there is something more powerful that keeps people coming back to Golden Gai: the knowledge that it won’t last forever.

The majority of Golden Gai buildings are protected historic structures that are no longer up to code. Once they are gone, it’s going to be impossible to rebuild them just as they were. So, if the unthinkable happens and the district disappears because of some natural or manmade calamity… it won’t come back. At least not how it is now. So better get there quick and have a drink while you still have a chance. But be sure to follow Golden Gai’s many official and unofficial rules while you’re there.

Golden Gai’s tiny bars with their single-digit occupancies don’t just FEEL like private drinking clubs, they often act like them. Some, in fact, don’t just let anyone off the street come in for a drink. You need to be introduced by a regular client and vetted by the owner. Also, sorry to say, but some bars may refuse service to foreigners who don’t speak Japanese. Those are very much in the minority and many Golden Gai joints happily advertise that they are foreigner-friendly and have English menus and English-speaking staff. But among the hundreds of Golden Bar dives, there are some that display “No Foreigners” signs.

The next thing you ought to know about boozing it up in Golden Gai is that it can get pretty costly. Drinks here go for about the same or maybe slightly more than in other parts of Tokyo but what’s important is that, like many bars around Japan, Golden Gai establishments collect “cover charge” entrance fees. Normally that wouldn’t be an issue but the unofficial rule of Golden Gai is that, unless you’re a familiar regular, you shouldn’t linger in one place too long. Businesses expect you to free up the limited number of seats after a while and bar-hop, but each visit carries with it another cover charge, which can range from as little as 500 to 4,000 yen for the classier establishments. And because many places in Golden Gai accept cash only, you better make sure to have enough money on you if you’re planning to drink the night away here.

Many Golden Gai bars open around 5:00 pm - 5:30 pm but the area doesn’t really come alive until 9:00 pm or 10:00 pm, except Sundays when Golden Gai apparently becomes a bit of a ghost town. Now, there are restaurants in Golden Gai, but the district isn’t exactly known for its food. If you get hungry while touring Golden Gai, you can pop off to the neighboring Omoide Yokocho that’s known for its yakitori chicken skewers. Rules that you will find in other parts of Japan also apply here: no smoking outside designated areas, no shouting or loud singing, and no climbing on buildings and fences. More importantly, taking photographs and videos of bars without permission is also forbidden, so make sure you ask if it’s OK to throw evidence of your night out on social media.

Perfect for: fans of death metal and horror movies. Appropriately, all drinks are priced at 666 yen. As a bonus, there is no cover charge and the bartender speaks English.

Perfect for: fans of elegant esthetics and chandeliers as well as larger groups.

Perfect for: fans of the 1980s and screenwriting as the bar’s owner Kenzo is himself an actor and writer. Also: a big fan of leopard print, which is displayed prominently around the bar.

Perfect for: female clientele looking for a safe, lively, and cozy play to drink the night away. The bar often hosts themed musical events and is especially recommended for newcomers to Golden Gai.

Japan is a nation with a strong drinking culture. There are thousands of vibrant back alleys around the country where you can get a drink. But none other also acts like an oasis of days past in the center of one of the most modern cities on the planet. At Golden Gai, every corner is dripping with history, and knowing that this little slice of old-school Japan can disappear at any moment only adds to the electric excitement of the area. Be sure to experience it firsthand if you’re ever in Tokyo in search for some after-dark fun.