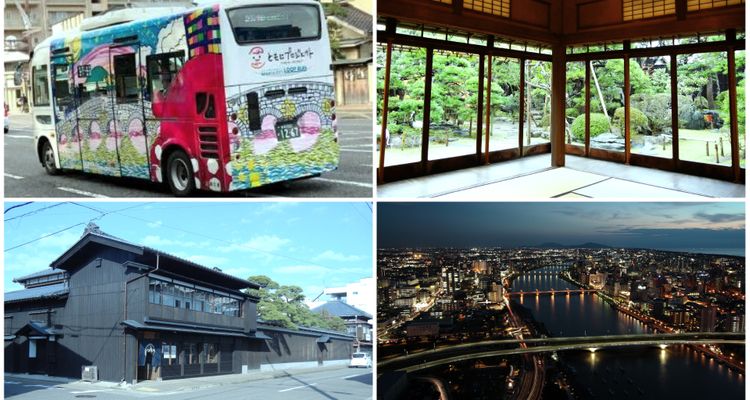 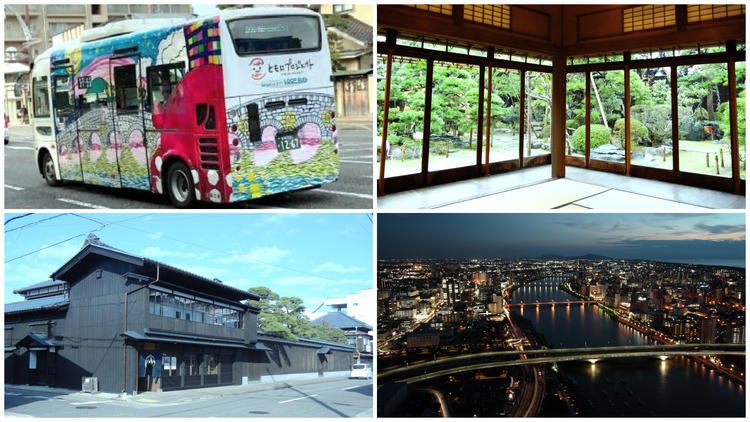 Niigata City, located on the Sea of Japan coast in Japan’s Koshinetsu region, long served as an important trading port and has a profound history and local culture that still flourishes today. It is equally famed for its wealth of regional delicacies, including scrumptious rice and abundant seafood caught fresh in the surrounding oceans. However, with so much to see and do, first-timers to Niigata City can quickly feel overwhelmed. Luckily, on the Niigata City Loop Bus, rideable for just 500 yen per day, you can tour much of the city’s sights with ease! In this article, we’ll follow the bus route and introduce you to some of the must-stop locations!

What Is the Niigata City Loop Bus?

The Niigata City Loop Bus stops at 16 locations in Niigata City, including Niigata Station, from which it departs and returns. Many of the main attractions in Niigata City are included on the route, including shrines, historical buildings, and even an aquarium, making it ideal for those seeking to visit multiple spots in a single day. While it is possible to pay the fare with each ride, purchasing the “One-Day Pass” will allow you to freely hop on and off as many times as you like within a day. Plus, you’ll also receive discounts and even small gifts at designated stores by showing the pass, making it a thrifty way to travel.

*Adults are considered middle school students and above (12+), children are elementary school and below (1-12)

The Niigata City Loop Bus first departs from Niigata Station at 9:30 am and continues to depart every 30 minutes thereafter until the final departure at 4:30 pm. Services are increased during the peak season of summer, while they are decreased in winter. Check the latest schedule in Japanese here, or by searching online in English.

Loop Buses can be easily spotted by their colorful designs! The bus above depicts the scenery of Niigata City centered around the iconic Bandai Bridge, illustrated by popular artist Shunsuke. Riding in such an eye-catching bus makes sightseeing in Niigata City all the more fun!

Where to Purchase the One-Day Pass

How to Use the One-Day Pass

The One-Day Pass can be used by scratching off the current date with a coin. Take care in doing this, as scratching off the wrong date will render the pass inactive. To use it, simply show the scratched pass to the driver when getting off.

Now, let’s take a look at some spots recommended for first-time visitors to Niigata City that can be toured with ease on the Niigata City Loop Bus!

There’s a surprising number of famous manga authors and anime creators hailing from Niigata! On the 1st floor of Bandai City is the Niigata Manga Animation Museum, which showcases these individuals and their works, as well as offers interactive exhibits like character-themed games, voice acting experiences, an area where you can try making your own anime, and plenty more! For anime and manga fans, this haven of Japanese subculture is a must-see!

Niigata’s Hakusan Park opened in 1873 under the proclamation of the Daijo-kan (a form of government in the early Meiji period) as one of the first-ever urban parks in Japan. It is Dutch-inspired, with paths navigating central ponds, man-made hills, and gardens of flowers and trees. Spring is famous for cherry blossoms, summer for lotus flowers, autumn for colorful foliage, and winter for snow, giving it a totally different appearance each season and allowing its beauty to be rediscovered time and time again. It is also right next to Niigata Hakusan Shrine, which boasts a thousand years of history.

Nearby Hakusan Park is the 500-meter-long Kamifurumachi Shopping Street, which is a small-scale, quaint arcade long-loved by locals. Within the street’s wooden rowhouses are both time-honored, retro stores alongside those sporting the latest trends, all bolstered by nostalgic cafes, homely restaurants, craft stores, vintage clothing shops, and more, attracting a diverse range of customers. We particularly recommend Kamifurumachi for those seeking out unique foods, stylish Japanese arts and crafts, and hip vintage clothing.

The Former Ozawa Family Residence served as the store and home of the Ozawa Family, who were merchants active in Niigata from the late Edo period. They were involved in several industries, including shipping, warehousing, rice wholesaling, land ownership, and petroleum sales, making them some of the most famous merchants in Niigata. Within the spacious grounds are seven buildings, including the main house and storehouse, along with a garden modeled on the scenic Matsushima coastline, all encompassed by a wooden fence. The stones adorning the garden were brought in from all over Japan, weaving together a lavish scene providing deep insight into the life of wealthy Meiji-era merchants.

The Bandaijima Sengyo Center is one of the largest fishmongers in Niigata City, offering all kinds of seafood caught fresh in the Sea of Japan each day. While most sightseers won’t be bringing seafood back home, here you’ll be able to indulge in freshly-cut sushi and sashimi, grilled shellfish, and a number of other delicacies able to be purchased and eaten on-site. Pier Bandai, where the Bandaijima Sengyo Center is located, is a large-scale market also selling everything from dried goods to processed seafood items, vegetables, fruit, rice, Japanese sake, and snacks. If you’re after the tastes of Niigata, this is where you’ll find them!

The Befco Bakauke Observation Deck is located 10-minutes on foot from the Bandaijima Sengyo Center. After stepping off the elevator, you’ll see the grand Gozu Mountain Range to the east, and Niigata's historical townscape along with Sado Island floating in the Sea of Japan to the west. The south side flaunts sweeping panoramas of the entirety of Niigata City and is particularly popular for stunning night views. The north showcases the port, where you’ll surely become entranced by the coming and going of ferries and cruise ships.

While this article focuses on spots located along the Niigata City Loop Bus route, from September 1, 2022, an electric bicycle share service centered on a roughly 2 kilometer axis connecting Niigata Station, Bandai, and Furumachi, has kicked off to make exploring Niigata City even easier! Using a dedicated smartphone app, you can search for bicycle parking spots called “ports,” from which you can book a bicycle and pay via credit card. Touring Niigata City by bike gives you the freedom to take in the scenery at your own pace, making it an equally great way to get around!

For those considering a trip to Niigata City to enjoy the charming sights and scrumptious cuisine, we hope you use this article as a reference and make the most of your time on the Niigata City Loop Bus and Share Cycle!