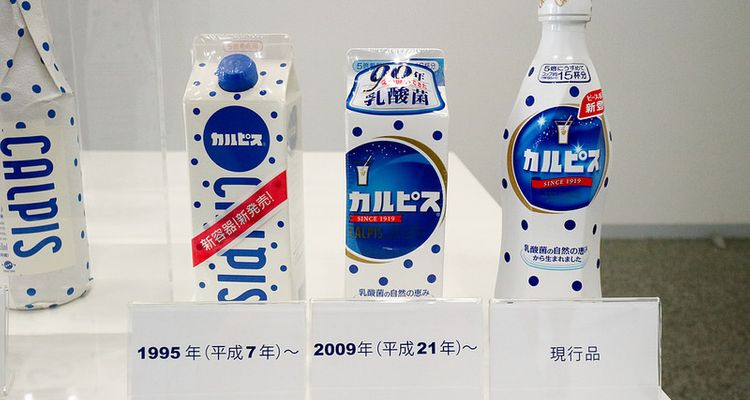 9 Interesting Facts You Didn't Know About Calpis (or Calpico)

Calpis is a milk based beverage made from Japan. Here are 9 facts that will make you want to take a sip!

For those who've never heard of it, Calpis is a milk based beverage widely loved in Japan. In other countries, though, it's marketed as Calpico, though it's the exact same beverage. Here are 9 interesting facts to deepen your knowledge about Calpis. Calpis came into this world officially on 1919/07/07. It was the first beverage to be made with lactic acid bacterium in Japan. Back then, it was thought that the Japanese people lacked calcium, so it was added for commercial value.

2. It was made by accident (like all great things)! The founder of Calpis, Kaiun Mishima, and the first factory manager, Yoshizou Kataoka, were working on applications of lactic acid bacterium in foods and drinks. Mishima did make a product containing lactic acid bacterium before, called Daigomi, made of  skimmed milk and lactic acid bacterium. However, it didn't sell very well. One day, Kataoka mixed Daigomi and sugar in a test tube and left it for several days, which was to become Calpis.

3. The name comes from 2 words "Cal" is taken from calcium, and "Pis" is taken from the Sanskrit word "Salpis," which is one of the five tastes described in Buddhism. However, Calpis is called Calpico in English speaking regions, because Calpis sounds a little like "cow p**s".

4. Calpis is made from milk, yeast and lactic acid bacterium The milk is skimmed, with yeast and lactic acid bacterium added. It is then left to ferment. Once it has fermented to a certain level, sugar is added. The mixture is again left to ferment further, and finally becomes Calpis. Calpis itself is a concentrate, so you need to thin it with water. For the perfect glass of Calpis water, add 1/5 of Calpis, and 4/5 of water. You can also add milk instead of water, but you don't need as much compared to water. Adding hot water is great for the cold winters.

6. They sell Calpis water and Calpis soda for those who just want to drink it NOW As the names suggest, Calpis water is Calpis mixed with water, and Calpis soda is carbonated Calpis water. It's available in pretty much all convenience stores, supermarkets, and vending machines.

7. Calpis comes in many flavors Now you can find the concentrated mix in grape, mango and peach flavors, along with ginger powder. For Calpis water, they sell mango, peach, strawberry, grape and apple flavors.

Calpis is not only tasty itself, but it can be used in a wide range of recipes as well. Here are a few examples:

8. Pour it over everything. Pour it over shaved ice in the summer, and you have a Calpis tasted Kakigori (shaved ice with syrup, a popular snack in summer time Japan). Add a little bit to sweeten your night cap. Add it to your yogurt for dessert. There are many possibilities; explore! For those who can read Japanese, here are plenty of recipes for drinks and cocktails. You can also use it like you would use yogurt to make your meat tender. Here's a recipe, and another one, for those who want further information and can read Japanese.