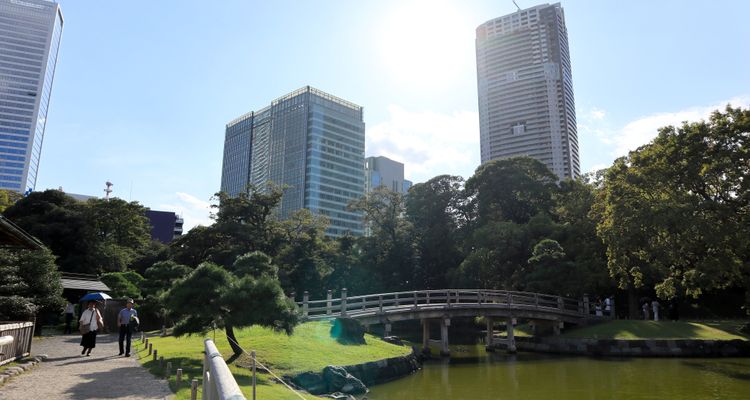 8 Beautiful Parks to Visit in Tokyo

Big city Tokyo has many beautiful gardens. This article has selected 8 gardens in Tokyo which you should visit when you're tired from sightseeing.

While Tokyo might not be famous for its greenery, many visitors to the city might not realize quite how many parks it has to offer. The majority of the parks on this list are traditional Japanese gardens, so you can enjoy a little oasis of peace in the middle of the big city. Rikugi-en was constructed in the Edo period and showcases a typical garden from that era. It was considered as one of the most beautiful gardens from the time of its construction. It is famous for azalea flowers which can be enjoyed from mid-April to the beginning of May. It is also famous for its cherry blossoms which can be enjoyed at the end of March. To visit Rikugi-en, take the Nanboku Line to Komagome station or the Mita Line to Sengoku station.

Shinjuku Gyoen was originally a private residence of a feudal lord, Lord Naito, in the Edo period, but in 1949, it was opened to the public. It is made up of a Japanese traditional garden, a French formal garden and an English landscape garden. If you want to enjoy the cherry blossoms, you should visit from the end of March to the beginning of April. There are three gates to the park and there are various train lines you can take to visit the park. Please note that it is closed on Mondays. Hamarikyu Gardens's pond is connected to the Tokyo Bay and the view of the garden changes with the tide. Although this style of garden was quite common for gardens located close to the sea, Hamarikyu Garden is the only garden where you can still enjoy the changing tides. Visitors can also enjoy a tea ceremony at the teahouse in the middle of the pond. It is close to Tsukiji Fish Market which is renowned for its delicious fresh fish and sushi. It is believed that there was a mansion at this location from the 17th century but the garden, as well as the mansion, were badly damaged by the Great Kanto Earthquake in 1923. It was donated to the city by the owner in 1924 to be used as a public park because, although it was damaged, it also served as an evacuation site and was able to save many people. As it is close to a river and the sea, visitors to the park can also enjoy bird watching. To visit Kiyosumi Garden, takethe  Oedo Line or Hanzomon Line to Kiyosumi-Shirakawa Station. Koishikawa Korakuen was constructed in 1629, the beginning of the Edo period, and is one of the oldest gardens in Tokyo. To enjoy the autumn leaves, you should visit from mid-November to the beginning of December. It is said that there was a cherry tree over hundred years old in the garden. Now, there is another cherry tree which is believed to be over sixty years old. The park is adjacent to Tokyo Dome City. Todoroki keikoku is different from all the other parks on this list in the way that it is not strictly a garden, but rather a valley. It is the only valley in Tokyo and is famous for its nature. In February and March, you can enjoy plum flowers; in April, cherry blossoms; in May, fresh verdure; and in autumn, the seasonal colors. There is also a Japanese garden, a waterfall and an ancient tomb. To visit, take the Oimachi Line to Todoroki Station. Kokyo Higashi Gyoen is a park adjacent to the Imperial Palace. In side the park, you can find a Japanese garden, the remains of Edo Castle, and the Museum of the Imperial Collections. There are three gates to enter. To visit, take the Tozai Line to Takebashi station or the  Tozai Line, Chiyoda Line, Mita Line or  Hanzomon Line to Otemachi station. Please note that it is closed on Mondays and Fridays. It is believed that Kyu Yasuda Garden was constructed between 1688 and 1703. It was connected to the Sumida River and like Hamarikyu Garden, people used to enjoy the changing scenery due to the movement of the tides. However, Sumida River's pollution started to affect the garden, so now they use a pump to artificially create the tide. To visit, take the Sobu Line or the Oedo Line to Ryogoku station.