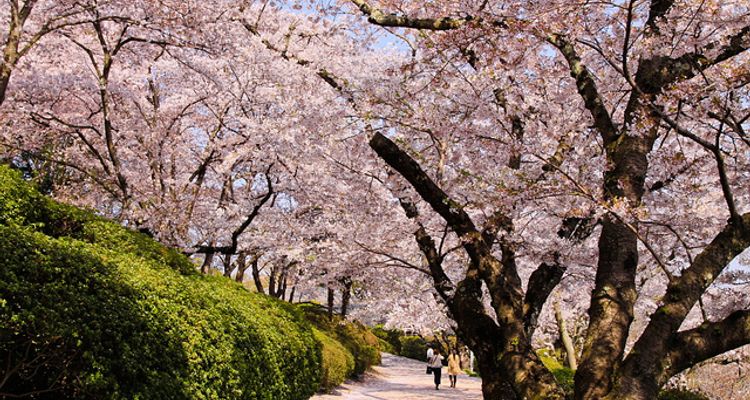 The four seasons is one of the real features of Japanese natural scenes. Seasonal flowers are indispensable for adding colors to the seasons of Japan. Let me introduce typical beautiful flowers to see in Japan in every season. When the season of the cherry blossom is over, the rainy season is coming gradually, and we see hydrangea everywhere in cities. The flowering time of hydrangea is from May to July. Various kinds of hydrangea have been developed recently, with a wide variety of colors and types.

The representative language of flowers of the hydrangea is "caprice", which used to be avoided depending on the scene. In the recent years, however, "family gathering" has been widespread. And hydrangea is gaining popularity as a gift flower on Mother's Day.

Also check: 21 Must-see spots for Hydrangeas in the Tokyo Area Sunflower comes to the top of summer flowers. It is large and bright, and its power makes you feel very energetic. The feature of the sunflower is that all of the flowers are facing the sun. We can see straightness in their language of flowers, which are "passion" and "staring at just you". A sunflower is recommended as a casual gift for a woman and it can be used for marriage proposal. When summer is almost over and equinoctial week arrives, spider lilies start to flower. In general, it doesn't have an auspicious image, but it is one of the flowers indispensable for early autumn in Japan. Its flower colors are mainly red and white, and each color has a language of flowers for expressing emotions. Speaking of the autumn flower, you will probably think of cosmos. It is so typical a flower of autumn that it is written "autumn cherry" (秋桜) in Chinese characters. Every flower has a modest impression, rather than loud. When cosmos field is in full bloom, however, it is very magnificent. Its flower languages are innocence, humility, harmony, etc., expressing a modest and beautiful woman. It is also a healing flower and the word "pretty" is perfect. Sasanqua is a kind of camellia family. It has been familiar among people in Japan since ancient times as a flower of early winter. Its flower has a strong presence, and it is very fragrant. Sasanqua is very similar to camellia, but camellia is characterized by dropping flower, while sasanqua is characterized by falling petals. Its flower language varies depending on the color of the flower, for example, "you are beautiful", "eternal love", "you reject my love", and so on. Each of them expresses the passionate love directed from man to woman. Daffodil is the flower that blooms in winter. In addition to its lovely appearance like a trumpet, it has a gentle impression of whiff, and has been popular since ancient times. In fact, it is said that the whole plant of daffodil is harmful. Its flower languages are conceit, egotism, and self-love, which came from the story expressing a narcissist man. Its leaves are similar to the leeks, so please be careful not to eat them accidentally. Field mustard begins blooming in late winter and it is in full bloom before spring. During this season, an increasing number of people go to see a flower garden of field mustard blooming like a yellow carpet. The character of "菜" of field mustard has a meaning of "edible." And you will see field mustard in the dishes served in early spring. Its flower languages are richness, brightness, and lightness. Many of them are associated with active and bright image. It is a perfect flower to inform you of welcoming the spring.