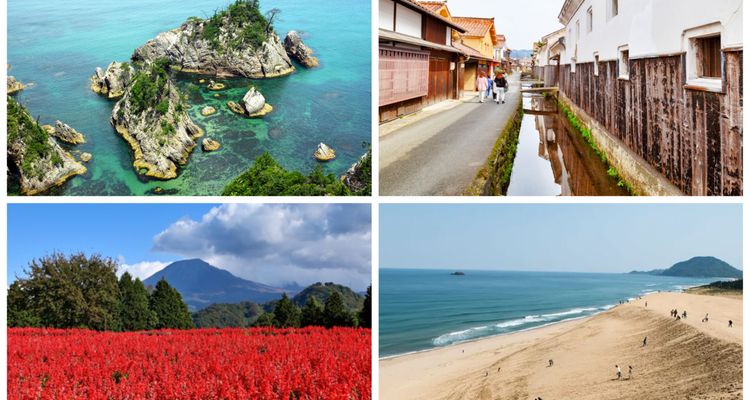 7 Photogenic Spots in Tottori, a Prefecture Full of Nature and Culture

Facing the Sea of Japan, Tottori Prefecture is filled with the wonders of nature and the beauty of Japanese culture. In addition to natural landscapes like the Tottori Sand Dunes and the Uratomi Coast, there are also places such as Shirakabe Dozogun and Juun Temple. In this article we will introduce some photogenic sites in Tottori that are definitely Instagram-worthy!

Take a trip into the past in Kurayoshi at Shirakabe Dozogun, a recreation of a traditional Japanese street. The warehouses on this famous street have white walls and red tile roofs, and the uniform buildings lined up along the street create quite an impressive sight. These warehouses used to be home to soy sauce and sake breweries, but they now house stylish cafes and galleries. There are even gift stores among them too!

The small river that runs alongside the warehouses is criss-crossed with stone bridges, and the water that runs beneath them is so clear, you can even see carp swimming around!

Hanami Gatabochi is an expansive graveyard along the seaside. Its location wasn't intentional, but people gradually started building graves there over time and now the number of graves stands at over 20,000. Rather than looking like a graveyard, it feels more like a city of graves by the sea. It's a quiet place where you can hear the crashing of the waves as they roll in, and there are several great photo-taking spots where tourists can get a look at the entire site.

During the Obon Festival in August each year, the tombs are lit by lanterns at night. The soft glow from the lanterns illuminates the surroundings, creating a dreamy atmosphere. It's particularly beautiful at dusk.

Hanami Kaigan, also known as Nariishi no Hama, is an unusual, natural coastal area where the shore is made up of round stones. When the waves roll in, the stones knock against each other, producing a characteristic rattling sound. It’s also said that if you write a wish on one of the stones and throw it into the ocean, your wish will be granted. The beach is also known for its unique and and visually impressive tall piles of stones.

There is also a sunflower field along the coast! While it's not a big field, you'll still be able to take beautiful pictures of the sunflowers with the sea, so it's a popular place for tourists to visit, especially in the month of August.

The Tottori Sand Dunes are the largest sand dunes in all of Japan and are designated as one of the nation's natural monuments. The dunes stretch as far as you can see, measuring 16km east to west and 2.4km north to south. The patterns created on the sand dunes naturally by the wind are not only beautiful but also provide a perfect photo opportunity. It's nice to simply look out at the sea from the dunes, but you can also enjoy camel rides or sand boarding. You'll be able to enjoy the scenery from a higher vantage point while riding the camels. On the eastern side of the dunes, there's also the Sakyu Kaikan, where you can purchase souvenirs or take a rest.

When winter comes, you'll see as many as 1,000 white swans flocking to the area. You'll also see wild geese, ducks, and species designated as natural treasures, such as the white-tailed eagle and Taiga bean goose. It may be a little far from the train station, but it’s well worth the trek.

Also known as Fuji-ji Temple, Juun Temple was established back in 1334. The temple is well-known for its wisteria trees and many come to catch a glimpse of the beautiful flowers. The view of the beautiful wisteria flowers hanging from the branches of the trees is a spectacular sight you should definitely go to see!

The Fuji Matsuri Festival is held every year from the 3rd to the 5th of May. During the festival, there are many events, such as Taishogoto (Nagoya harp) performances. Seats are prepared under the wisteria trees, and you can enjoy tea and Japanese sweets in this lovely environment.

Uradome Coast (Uradome Kaigan) is known for being a rias-style (sawtooth shaped) coast. Here, you can see naturally formed caves and interesting rock formations. In fact, it's one of the top scenic spots along the Sea of Japan. You can walk along the coastal path and enjoy the gorgeous views before you. There are many coves, so you can admire the different topography as you take in the surroundings!

In summer, the shore gets crowded with people who come to swim. The water is crystal clear so it's great for snorkeling as well.

There are many scenic spots in Tottori prefecture. They're all beautiful, and the scenery changes with the seasons as well. This makes them charming locations that are great photo opportunities all throughout the year!