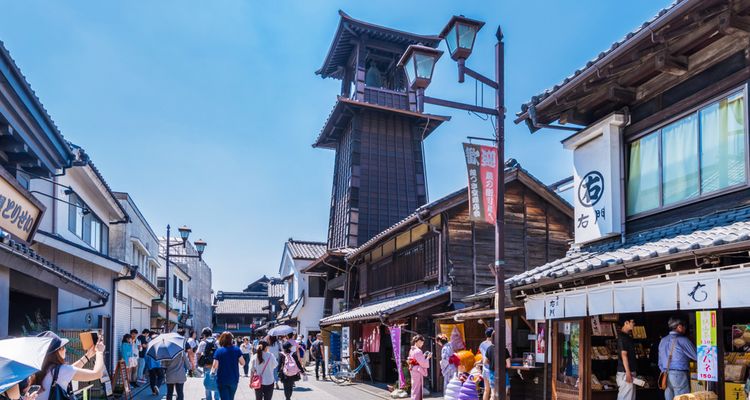 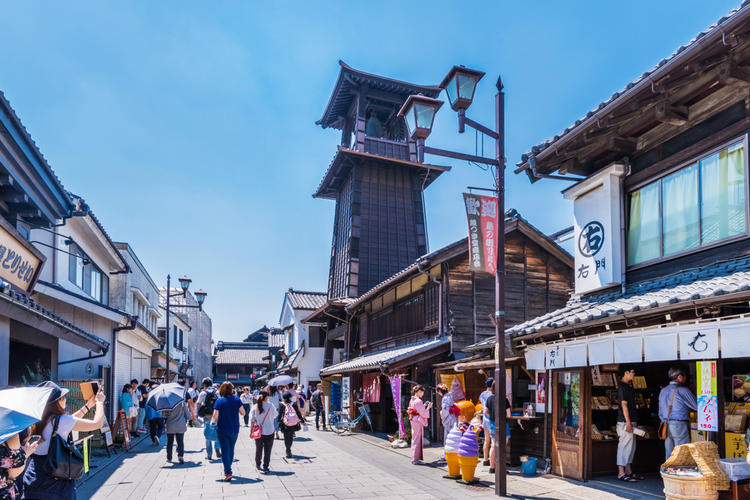 Tokyo has its fair share of parks and flower gardens, but sometimes you feel like leaving the world's biggest city altogether and spending a day in more serene surroundings. Saitama Prefecture, directly to the north of Tokyo, offers the perfect combination: convenient and speedy access via Tokyo's substantial rail network, and the natural scenery you'd associate with the countryside. This article will introduce seven picturesque locations that you should swing by while you're in Saitama, from old-fashioned Japanese towns to classic and modern train cars and multicolored flowers galore!

1. Be a Train Conductor For a Day At Japan’s Best Railway Museum

At the Railway Museum in Omiya, Saitama City, you can learn all about the history, structure, and technological progress of Japan’s railways. They offer displays of real-life train sets and even train simulators.

There are no fewer than 41 trains on display in the museum, including 36 in the grand central space. Among these are 4 train cars designated as Important Cultural Properties and “Goryosha” cars once used by the Emperor. There are also “stations” where you can learn about the history of Japan’s railways, the science and mechanics of how trains run, and a day in the life of a Japanese railway worker.

A model train set, the “Teppaku Line,” runs through the sleek modern building which opened in 2007. Round out your visit by stopping by the gift shop or one of their multiple restaurants, including one that looks like a meal car on a train!

In Kawagoe City, there is an area with an old-fashioned townscape called "Little Edo" (or “Ko-edo”) that prospered as a castle town surrounding Kawagoe Castle during the Edo Period (1603-1868). This moniker stems from how its lively commercial activity resembled that of the capital city of Edo (what is now Tokyo). If you want to look around Little Edo, we recommend using the Koedo Loop Bus. With a one-day pass, you can get on and off as many times as you'd like for just 500 yen! This ticket can be purchased at the Kawagoe Station Tourist Information Center or on the bus.

In Little Edo, you can enjoy a walk while enjoying its distinct atmosphere, with streets that are lined with historic warehouses and buildings, a belltower called the "Toki no Kane" which has been ringing since the Edo Period, and "Kashiya Yokocho," where you can buy traditional Japanese sweets. Such a traditional townscape is an excellent occasion to wear traditional yukata or kimono, and there are many stores along the main street where you can find them. There is also the Kawagoe Castle Honmaru Palace, which was built over 170 years ago and allows visitors to learn more about the history of Kawagoe!

Finally, if you can, try to visit in mid-October for the Kawagoe Festival, with its many floats in vibrant colors.

3. Enjoy a Beautifully Aromatic Festival at the Ogose Plum Grove

Within Ogose Town in Iruma-gun, Saitama, you can find the Ogose Plum Grove with over 1,000 plum trees, including the white Shirokaga and red Kobai varieties. It's considered one of the best plum blossom spots in the Kanto area. Legend has it that this grove was created by Sugawara no Michizane, the god of learning, when the Dazaifu Tenmangu Shrine in Kyushu that honors him was "split off" and brought to Ogose.

The Ogose Plum Festival is held each year around late February to mid-March, when the plum flowers are in full bloom. It features some 20,000 blossoming plum trees, including those in surrounding areas. Each type of plum also has a distinct fragrance, so take some time to notice the smells as well! The festival includes taiko drumming, a lion dance performance, and a small model steam locomotive chugging its way through the garden.

Springtime in Japan means the arrival of cherry blossoms, or "sakura," and Saitama has several beautiful destinations for "hanami," or flower-viewing. Late March to early April is peak sakura season in this area, although precise dates vary by year (peak bloom in 2021 is projected to be March 29).

There are numerous excellent spots for sakura-viewing in Saitama, but we particularly recommend Kumagaya Sakura Tsutsumi along the Arakawa River in Kumagaya City. Some 500 sakura trees of the Somei Yoshino variety, in full colorful bloom, line the river over some 2 km. Nanohana (rapeseed) blossom nearby as well, creating a vibrant trio of yellow, pink, and blue. It’s been a well-loved sakura spot since the Edo Period and was selected as one of the 100 best sakura spots in the country.

Most years, the peak of sakura season here is accompanied by a two-week festival on the grounds. The festival for 2021 has, however, been cancelled.

Mt. Buko, 1304 meters tall and standing on the border of Chichibu City and Yokoze Town, is a popular destination for trekking and sightseeing. It's a distinctive and curious sight: much of its slope has been shorn of its vegetation and mined for its limestone, leaving behind a bare, terraced surface.

Hikers usually climb the other side, however, which is far more lush and natural. There are several available hiking trails, among which the most popular is the Omotesando Trail. There are numerous beautiful sights along the way, including the Fudo Falls (photo above) and a clearing with giant cedar trees. Japanese touches include a torii gate at the base, adorned with stone guardian animals, and Mitake Shrine at the summit. The observation deck provides a breathtaking sight of the Chichibu townscape.

Reaching the foot of the mountain requires a 90-minute walk from Yokose Station, and you should block out 6 hours for the whole trek.

At the foot of the mountain, closer to Chichibu's city center, is Hitsujiyama Park, where many shiba-zakura (moss pink) flowers are in full bloom between mid-April and early May. It’s a breathtakingly vivid image, as if the park is blanketed by a carpet with a bright pink, purple, and white pattern.

While at the park, you can stop by a pond, a tennis court, and even a sheep ranch. During the shiba-zakura season, stalls on the park grounds sell a variety of food and souvenirs.

There is one other time when this park takes center stage: the Chichibu Night Festival, which takes place every December, when the park hosts a fireworks showcase. This festival, as well as the Kawagoe Festival mentioned earlier, is among the 33 Japanese festivals that are inscribed as a UNESCO Intangible Cultural Heritage Site!

6. A Field of Baby Blue Eyes Flowers at Shinrin Koen

The Musashi Kyuryo National Government Park, which straddles Namegawa Town (Hiki District) and Kumagaya City, was the first government park in Japan, opening in 1974. It is more colloquially known as Shinrin Koen ("forest and woods park"), also the name of the nearest station.

The park mainly features groves of trees, but various other landscapes such as ponds and grasslands can be found within the park as well. Various important animal and plant species also inhabit the park. Different varieties of flowers bloom throughout the year, blanketing the garden in brilliant colors: tulips in March and April, water lilies in the summer, meadow saffron through the fall, and so many more.

If you had to pick one time to visit, however, you should opt for anytime in the month of April, when about 100,000 baby blue eyes (or "nemophila") are in full bloom at the West Field flower garden. Here, you can soothe your eyes by taking in the sight of the beautiful blooming sky blue flowers swaying in the spring breeze.

The Chichibu Railway is a local railroad that connects Hanyu Station in the northeastern part of Saitama Prefecture to Mitsumineguchi in the prefecture’s far western edge. It began operations in 1901, and today, it offers a more rustic rail experience than the sleek commuter railways that run to the center of the city (only paper tickets accepted here for now, but IC cards will be accepted from 2022!). This aesthetic is exemplified by the “Paleo Express,” a retro steam locomotive that runs between spring and autumn, primarily on weekends and holidays. Named after a dinosaur that roamed Saitama 13 million years ago, the Paleo costs only an additional fee of 520 yen to board for what is a once-in-a-lifetime opportunity! Springtime photos of the railroad running alongside cherry and rapeseed blossoms are also a delight.

The railway is functional on top of aesthetic. It runs near some excellent tourist spots, including Hitsujiyama Park and the sakura at Kumagaya (mentioned above), as well as Nagatoro, where you can enjoying rafting among some excellent views, and Mitsumine Shrine, one of the most popular spiritual spots in the Kanto region. If you decide to visit, we recommend you get a 1-Day Pass, which allows you unlimited rides along a certain portion of the line!

It'd be a mistake to overlook Saitama: there you can find so many of the different sights and scenes that travelers imagine when they think of Japan. It'll be difficult to capture all of them on camera at once, as the flower seasons and the Kawagoe and Chichibu festivals do not overlap, but that just means that Saitama has enough to offer to sustain you over multiple visits! Make sure to bring your best camera with you and enjoy exploring the region!