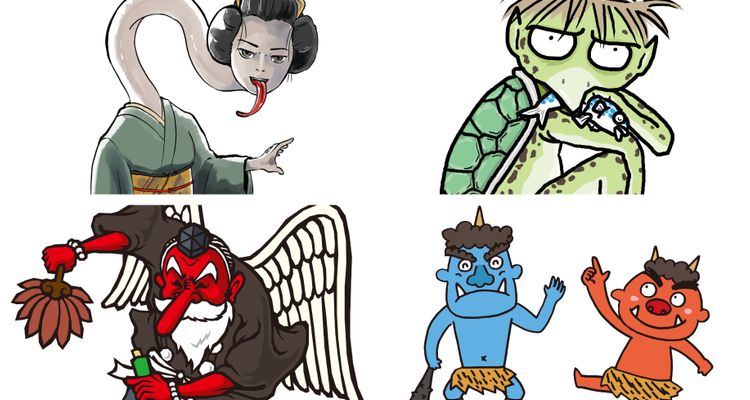 In Japan, mystical creatures such as monsters, ogres, and fairies are all called yokai. The connection between tokai and Japanese people is deep, and the religious and cultural belief that Japanese people have are often coming from the awe and respect for these spiritual beings. Here are some of famous and interesting yokai in Japan. Yokai is a collective name given to mystical creatures in Japan that have been believed to cause supernatural or scientifically unexplainable phenomena and it has always been closely connected to the lives of the Japanese people. From ancient times, it was believed that everything in this world possesses something spiritual in Japan. This belief of worshiping these spiritual beings with awe and respect prevail to present days in the forms of Japanese culture in general as well as shrines and temples. Kappa is a famous yokai that every Japanese person knows. The body of this creature is covered in green and it has fins for hands and feet. One distinctive feature of kappa is the plate on its head. When the plate breaks or dries up, the creature gets weakened and eventually dies. They inhabit waterside places such as rivers and swamps, and mess around with people who are unfortunate enough to make the mistakes of swimming in their habitat by pulling the legs to drown them. Their favorite food is cucumbers, and kappamaki, sushi rolls made with cucumbers, are named after this creature. The closest thing to oni that the Western world has is ogre. Their skin color varies in one individual to another but red and blue are the most common colors. Oni have a horn or two, big fangs, and sharp claws. They usually carry various weapons but clubs are the most common choice of weapon among them. They are said to live in hell and take on the role of punishing those committed sins in their life. The Namahage festival that is listed as an Intangible Cultural Property of Japan makes use of oni masks.

Tengu is a yokai with a red face, a long nose and dresses as an ascetic monk. They are feared by people as a yokai that brings calamities to people but were also worshiped as a deity of mountains in various regions throughout the country. Because of its distinctive look, the name appears as a Japanese name for some other animals brought to Japan in old days. Also its name is used as a metaphor for arrogant people. The zashiki warashi is a spiritual being whose legend was handed down throughout Tokoku area for many many years. It looks and dresses like a child and inhabit in a human house. It is believed to be the symbol of good fortune and the house that it lives is said to prosper but the one it leaves is said to decline. In recent years, a lodging facility that allegedly has a zashiki warashi has received a lot of attention from the media, and a number of celebrities go there to stay, making it a popular lodging. Rokuro kubi is a yokai that often appears in classical Japanese literature and essays. It looks like a normal human being at first sight, but it has a frighteningly long neck. There are a few types of rokuro kubi such as some whose neck floats around, and ones that can extend their neck. There is also a case that it is described not as a yokai but a strange disease, and there is a document saying a man with a long neck existed in 1810. Interestingly, there is also a similar type of mystical creature believed to exist in China, countries in Southeast Asia such as Malaysia, and South America. Azuki arai is a Yokai that washes the azuki beans on the riverside for no particular reason at all. This creature is widely recognized in Japan and it appears in a lot of regions throughout the country. The names given to this creature also vary in regions and in some areas, it is believed to do some bad things such as abducting people, while in some other areas, it is believed to be the symbol of good fortune. If you want to see it, you may want to search around the nearest river.