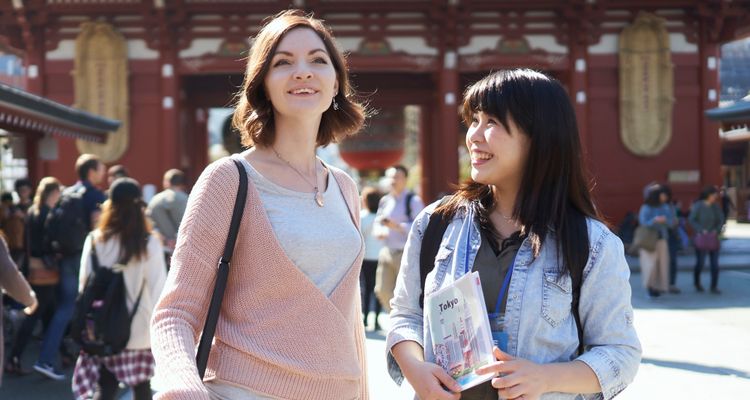 Japan holds a prominent position as one of the top tourist destinations in the world, with many outlets praising its unique culture, food, people, and the country as a whole. Some may be skeptical of this hype, but as a long-term resident of Japan, I can fully attest to just how amazing Japan is, even after living here for a decent portion of my life. There is always something to look forward to every day, and there is so much to discover with every aspect of the culture and in every corner of the country. Here are 5 reasons why Japan has continued to captivate me as a long-term expat!

This is probably one of the things we hear most from friends who have been to Japan before, and it’s really true. In Japan, good service and customer needs are put at the forefront as a general rule. This can easily be seen with the ubiquitous vending machines serving hot drinks in the winter, the trains running like clockwork, and the 24-hour convenience stores at which you can make photocopies, send faxes, buy concert tickets, and even pay your electric bill.

It could be said that this ties into the Japanese concept of “omotenashi”, which is usually translated as “hospitality”, but its true meaning is deeper than that. A more direct translation might be “lacking ulterior motives” - in other words, an act of genuine customer service. It is this concept that has led Japan to be lauded as one of the most convenient countries on the planet!

2. There's Always Something New to Discover

There are so many fascinating things in Japan that will have you scratching your head and asking the question “Why?” over and over again. While it is easy to write it off as a funky quirk of Japan, you'll find that, after digging a bit deeper, the answers are always really interesting and lead to a slew of new thoughts and questions.

The statue in the image above is one very interesting example. These are found guarding the entrance to shrines. They're actually lions, the guardian animal of Buddha, and were originally situated outside of temples. Eventually, they became to be associated more broadly as the protectors of gods, which is the reason they started appearing in front of Shinto shrines, too.

How about the significance behind the station song playing at JR’s Takadanobaba Station? This song actually comes from the famous cartoon Astro Boy. Tezuka Production, the company that produced this cartoon, is located closeby.

And why exactly is Tokyo Tower red and white? Easy visibility for planes during the daytime!

Just like this, everywhere you turn, there are always so many stories behind every little aspect. You'll never get bored in Japan, no matter how often you visit!

3. It's a Paradise for Hobbyists

If you have a hobby, chances are there is someone in Japan who has the same hobby but has taken it way further in ways you probably haven't even imagined.

An odd example of this phenomenon is straight razor shaving. How in-depth could that go, right? Turns out - pretty deep! Enthusiasts know the difference between Japanese and Western razor makers, histories behind antique razors, shaving techniques, razor upkeep methods, how and where to buy secondhand items, and so on.

Perhaps this passion showcases the Japanese concept of “kaizen” or continuous improvement, something Japanese people seem to apply to their daily lives. Regardless, thanks to this ideal, Japan is full of places for enthusiasts of any kind, and is worth a visit just to see how deep some hobbies go.

4. The Food Is Undeniably Amazing

Like so many other aspects of Japanese society, Japanese cuisine has developed with a few core concepts in mind: simplicity, beauty, and delicious taste. The Japanese have somehow managed to bring out the best out of the simplest ingredients, and have continuously made waves in the international gourmet scene with offerings like matcha (powdered green tea) and katsu sando (deep-fried pork sandwiches).

It could be argued that Japan is one of the most food-obsessed countries in the world. After watching hours of Japanese TV highlighting restaurant after restaurant, it's not hard to see why. There is so much variety in Japanese cuisine that you can eat your way through Japan and still have so much more to try!

That said, many regions of Japan are particularly known for specializing in certain foods; for instance, you should take a trip out to Shikoku for the soba noodles, Osaka for the takoyaki (octopus balls) and kushikatsu (fried skewered meat), and of course Kobe for the beef!

One key defining feature of Japan's food culture is that the Japanese are mindful of the idea of finding satiation through flavor, not quantity. This brings to mind the Japanese proverb “Hara hachi-bun-me, isha irazu," which basically means that you shouldn't overeat, and should only eat until the point that you feel 80% full.

For more information on food in Japan, check out our articles dedicated to Japanese food, drink, and more!

5. It's All About the Fine Details

They say it's the little things in life that matter, and Japan takes that seriously. There are so many little details that the Japanese put into usually mundane things, revealing an extra level of care. When you notice these small expressions of mindfulness, you can’t help but smile.

An example of this would be the detailed art on Japanese manhole covers. These customized metal disks are real works of art, whereas in other countries they are usually overlooked or only considered for their utility. Be sure to keep an eye out for them!

There's so much to discover in Japan, that even for long-term residents like myself, it feels like I've just barely scratched the surface. With a culture as deep and refined as Japan, the rabbit hole never seems to end, and that's the beauty of this country. So, if you've been pondering a trip to Japan but haven't been able to pull the trigger, look no further! You'll definitely have an amazing time exploring this diverse and unique country!