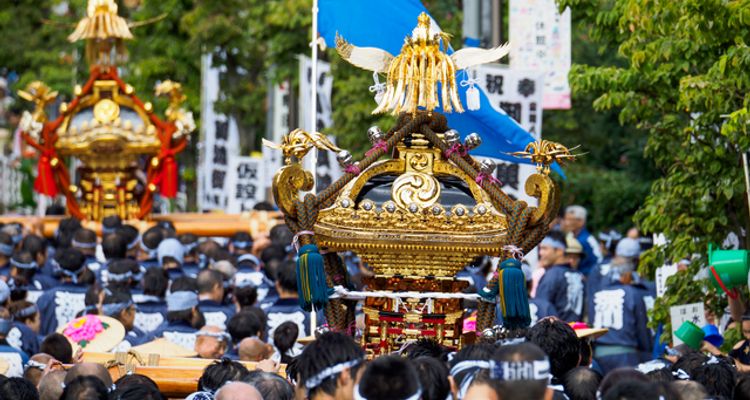 The Takayama Festival consists of festivals held in the spring (April 14th and 15th) and autumn (October 9th and 10th) in Takayama. The centerpiece of this festival is 12 luxurious tall floats and mechanical puppets mounted on some floats. Both processions are breathtaking, as is the charming town it takes place in. This festival is held between May 3rd and 5th to celebrate births. The main attraction is kite-flying at beach in the daytime and a lit-up float parade in downtown in the evening. They fly big kites with babies' names on day 1. On day 2 and 3, the kite-flier battle is fought between 170 kites from different towns. In the battle, the participants try to cut the threads of other kites using friction. This festival is held on the first Saturday and Sunday of April in Inuyama where Inuyama Castle is. There are 13 three-storied antique floats and each has mechanical dolls from the Edo period. The puppets give a short performance. Those floats are lit up with 365 lanterns at night and it’s magnificent to see them parade through the blooming cherry blossom trees. This festival with a history of over four hundred years is held in late October in Iga Ueno. The nine antique floats and their festive music remind us of the Kyoto Gion Festival. The parade of over one hundred ogres are eye-catching. It is rare to see so many ogres simultaneously. Some are droll, while others look frightening. This fire festival is held on July 14th in the Kumano Nachi Grand Shrine. The centerpiece of the festival is 12 blazing torches carried to the base of the Nachi Waterfall to purify 12 ougi-mikoshi, portable shrines, before the deities enshrined go back to their home once a year. It’s a spectacle as those torches are 6m tall and weigh 50 to 60kg. This fire festival is held on Saturday and Sunday in mid-March. Sagicho is the name of the floats decorated with the year’s Chinese Zodiac animal. They are made by locals with straw and foods such as beans and kelp and take about two to three months. After the daytime procession, people compete for the best Sagicho float, then burn them down.

This internationally famous festival is a month long event which peaks onJuly 17th and 24th when beautiful floats parade in the city. 23 floats are paraded on the 17th and 10 floats on the 24th. In addition to the splendid floats,  the festive music played with flutes and percussion instruments is attractive, too. This festival is held on July 24th and 25th. The centerpieces of this festival are the land and boat processions. Mikoshi and sacred figures accompanied by three thousand people parade about 4 km from Tenmangu Shrine to the Okawa River and all get on a few hundred boats. The boat parade lit up in the river at dusk looks magnificent. This Buddhism ceremony has been held from March 1st to 15th in Todai-ji in Nara since 752. The highlight is the fire ceremony. Ten 6m long torches are brought into the wooden temple and placed on the balcony every night. The showering sparks of those torches are believed to protect people who touched them from evil.

This event, held on October 14th and 15th in Himeji, is called the ‘Kenka Matsuri’, the "fighting festival," as it looks like the mikoshi are fighting. Three mikoshi are jolted against one another. It's said the more they are damaged, the more the deities enshrined are satisfied. 7 massive floats, similar to mikoshi, also parade rather roughly as if they were fighting. This dance festival is held between August 13th to 15th during the Obon holidays. The participants dance with colorful umbrellas made of bamboo strips, bells, and paper. Shan-shan is the onomatopoeia sound for tinkling bells. The climax of the event is the night of August 14th when more than four thousand dancers parade wielding their umbrellas on the main street.

The highlight of this religious event takes place on the third Saturday of February at Saidaiji Temple. The leading part is the sacred piece of wood prepared for 19 days before the main event. The festival's aim is to obtain this sacred piece of wood, as it's the symbol of good fortune. The participants are naked except their fundoshi loincloths to present their purity. While many consider this event as male-only, the drum performance before the main event is played by women. This drum parade is held annually on the third Sunday in October in Matsue to celebrate the town's founding. Huge Japanese drums called ‘do’ (diameter of 1.2- 1.8m) mounted on 15 floats parade through the city. The stirring sound of the drums accompanied with flutes echoes through the charming castle town. This event is held on the night of June 17th at Itsukushima Shrine when the tide is high enough for vessels to touch down at the shrine. Kangen was originally an entertainment event held in the courtyard during Heian period that featured aristocratic played music onboard in rivers or ponds. The founder of Itsukushima Shrine decided to hold this event for the deity in the sea. The climax of the event is when the traditional wooden boats twirl in the narrow area.

This event is held from May 2nd to 4th in Shimonoseki, a port town. Many colorful events take place during the festival including ‘jorodochu,’ or the parade of the highest-ranking courtesans, a procession of 100 samurai, and a recreation of a sea battle involving 80 boats based on historical events. This festival is held from October 9th to 11th October in Kotohira Shrine. This shrine is located on a hillside and is well-known for the long steps needed to reach the main building. The procession with a sacred horse, Shinto priests, and their attendant move to otabisho (temporary shrine) at thefoot of the mountain. The big mikoshi carried by priests who go down 758 stone steps is a must-see. 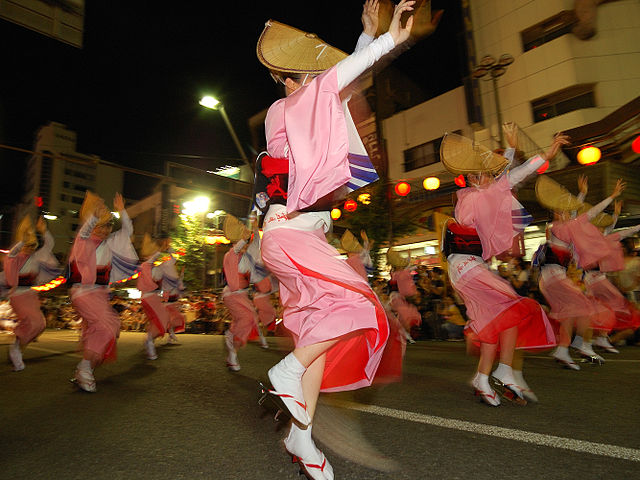 This bon odori dance festival is held from August 12th to 15th in most of the city of Tokushima. Dancers in colorful kimono dance to the music played on flutes, shamisen, drums, and percussion instruments. This spectacular dance festival attracts more than 1.3 million tourists every year.

This autumn harvest festival is held between October 15th and 18th. 52 gorgeous floats called ‘taikodai’ parade through the city. The highlight of the festival is the float fighting. Floats weighing 3 tons and reaching 5.5 meters in height and are lifted up; the float that is lifted up the fastest wins. Each float is carried by maximum 150 men. This city-wide spectacular dance carnival is held between August 9th and 12th. About 200 teams of 9000 dancers dance in 16 sites throughout the city of Kochi. Costumes and dance composition can be arranged freely except for the one condition that they should hold naruko, a small instrument.

This festival is held from July 1st to 15th. The highlight is the procession on the last day that starts from 4:59 in the morning. 7 floats are paraded through the town. These 1 ton floats race through the 5km course in turns, averaging about 30 minutes each. 14 10m tall floats are also exhibited. They used to join the parade but after the introduction of electric wires, they are too tall to go through the streets safely.