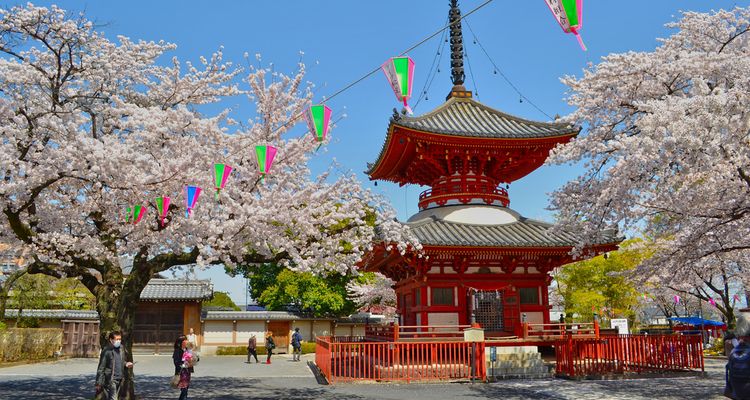 Must-Visit for History Buffs! 4 Shrines and Temples in Kawagoe Related to the Tokugawa Family

During the Edo period (1603 - 1868,) Kawagoe flourished as a castle town, earning itself the name of “Little Edo.” Nowadays, it has become a popular travel destination, attracting 6 million tourists a year, where you can find several charming temples and shrines associated with the Tokugawa clan. Read on to learn more about them and plan your next trip to Kawagoe! You'll be sure to spend a blissful day there, especially if you’re a history lover!

Built in the year 830, Kita-in is a famous Buddhist temple and the head temple of the Tendai-Sect in the Kanto area. It gained notoriety while led by the priest Tenkai and was patronized by the first three Tokugawa "shogun" (military rulers of Japan during the Edo Period). So, when Kita-in Temple burned down in 1683, the shogun Tokugawa Iemitsu decided to transfer part of the Edo Castle to Kita-in to reconstruct it. For this reason, Kita-in contains the only remaining structures of the original Edo Castle, such as the reception hall that was the birthplace of Tokugawa Iemitsu, and the writing hall that was the dressing room used by Iemitsu’s wet nurse, Kasuga no Tsubone. Apart from the structures related to the Tokugawa clan, the Jigen-do Hall (a chapel to the priest Tenkai) is also worth a visit, as it is considered an Important Cultural Property.

Another popular feature within the premises of the temple are the 540 statues of "rakan" (disciples of Buddha) known as the Gohyaku Rakan. They are prized as one of the top three images of rakan in Japan, thanks to the way they portray human emotions with their impressive facial expressions. The statues perfectly complement the beautiful seasonal scenery of the temple throughout the year, so be sure to check them out!

Semba Toshogu Shrine, one of the three major Toshogu Shrines in Japan, is located on the south side of Kita-in Temple. After Tokugawa Ieyasu passed away in Sunpu (present-day Shizuoka,) his remains were transported to Nikko. During the journey, a memorial service was held by the priest Tenkai at Kita-in. This event resulted in the construction of the Semba Toshogu Shrine in 1633. From Tokugawa’s "mitsuba aoi" (triple hollyhock) symbol on the worship hall to the line of stone lanterns carved with the names of the past Kawagoe feudal lords of the Edo Shogunate, everything in this place speaks of history and past glories.

Many structures within the shrine are designated as Important Cultural Properties, such as the Karamon Gate, the Mizugaki Fence, the worship hall, the hall of offerings, the Zuijimon Gate, and the majestic stone torii. The main hall is adorned with colorful decorations and even its pillars boast elegant carvings that match the fame of Nikko's Toshogu Shrine.

Kawagoe Hachimangu Shrine was established by Minamoto Yorinobu (a samurai of the powerful Minamoto clan) in 1030 as the "ichinomiya" (first shrine) dedicated to Hachiman (Shinto deity and patron of warriors) in Kawagoe. Among the many famous worshippers, there was also Ota Dokan (a samurai and Buddhist monk), best known as the builder of Kawagoe Castle and Edo Castle. For this reason, he was enshrined at Kawagoe Hachimangu Shrine as the guardian of the castle after his death.

There are several folk tales associated with the shrine, including one related to a fox named Minbu who is said to reside at the Minbu Inari Shrine (a separate shrine within the grounds of the Kawagoe Hachimangu Shine that is also called "Sumo Inari"). It is said that donating a wooden plaque (called an "ema") at this shrine can help prevent bruises and sprains, so many athletes come to pray to both Minbu Inari Shrine and to Hachiman for victory. The shrine is also well known for its sacred, giant ginkgo tree called "Nuptial-Tie Gingko." Originally, two trees were planted separately to celebrate the birth of Emperor Heisei but later grew into one tree. This created the belief that the Kawagoe Hachimangu has a strong spiritual power as a matchmaking shrine.

The long-established Kawagoe Hikawa Shrine is said to have been built 1500 years ago by Emperor Kinmei. The main structure boasts elaborate carvings donated in 1842 by Matsudaira Naritsune, the lord of Kawagoe Domain at that time. As Kawagoe Hikawa Shrine enshrines deities that are regarded as married couples, it is particularly renowned for matrimonial happiness, happiness in the family, and matchmaking. Many people visit the shrine to write their prayers on ema (wooden plaques) and hang them in a specific tunnel within the precincts to make their wishes come true. Visitors can enjoy walking through this unique ema tunnel filled with people’s wishes and dreams.

Another popular item at Kawagoe Hikawa Shrine are the "aitai omikuji" (fortunes written on strips of paper) that have the unusual shape of a "tai" (sea bream). These unique omikuji are used to predict love fate and their name is a play on words, as "aitai" also means missing or wanting to see someone. Finally, every summer, the shrine holds a Wind Chime Festival. During the festival, visitors can enjoy the windchime lane, a path decorated with dozens of colorful wind chimes, while writing their wishes on thin wooden strips attached to bells.

Aside from temples and shrines related to the Tokugawa clan, there are many amazing attractions in Kawagoe waiting for you to explore. So, don’t miss out on this charming Edo-period town with townscapes reminiscent of old Japan!