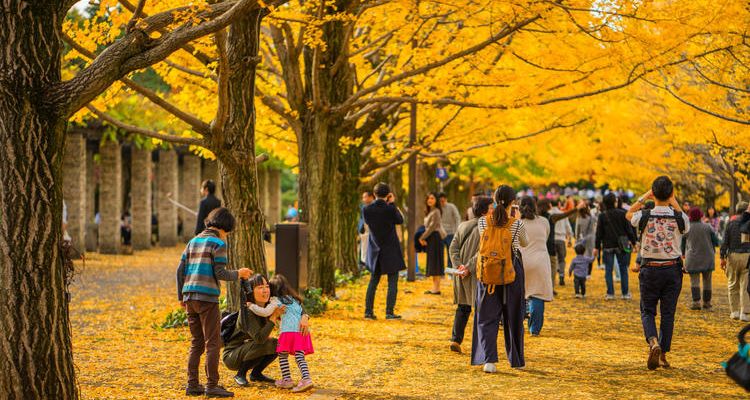 Fall Foliage Forecast: When and Where to see Autumn Leaves in Japan in 2019

Many tourists flock to Japan each fall to see the stunning scenery on display, but when exactly is the best time to see the autumn leaves in each region? In this article, we've whipped up a Japan's Fall Foliage Calendar with information we've compiled together on fall foliage nationwide for 2019. We've also selected a few popular spots for fall foliage in each area, so feel free to use this guide as a reference!

*The information in this article is based on "Autumn Foliage Viewing Information 2019" data provided by the Japan Weather Association on October 3rd, 2019.

As the extremely humid summer draws to an end, the Japanese archipelago shifts gears to autumn with a cold draft settling in. You'll probably want to know if the fall foliage forecast matches up with your travel plans, as anyone would be eager to see the leaves at their peak season. However, the best time to see the autumn leaves differs by region; the leaves first start changing colors in the most northern part of Japan in Hokkaido, gradually moving down to the south, so it's possible that the leaves could already be falling in the Tohoku region, while on the other hand, Osaka is fully in autumn leaves mode.

If the temperature in autumn (September - November) is on the low end, the best time to see the fall foliage comes earlier on in the season. Conversely, if the temperatures are high, it'll arrive later in the season. The average temperatures nationwide for the fall this year are expected to be higher than previous years, and the chilly mornings and evenings are also predicted to arrive later than usual. The peak autumn foliage seasons of popular sightseeing spots all throughout Japan are expected to occur around the same time or later than the average year.

So, without further ado, let's go through Japan region-by-region and explain the best times and places to visit to see stunning fall scenery.

As the northernmost prefecture in the Japanese archipelago, Hokkaido is the first place in the country each year where you can view autumn foliage. For 2019, it is predicted that foliage viewing season will be a little bit later that the average year. While the temperature is expected to be higher than average from now, there are more days with chilly mornings and evenings, so the ball will start rolling for the leaves to begin changing colors. As the temperatures are predicted to be higher this fall, the peak season for the fall foliage is also expected to arrive slightly later than previous years.

When it comes to fall foliage spots in Hokkaido, the Hokkaido University Ginkgo Avenue is especially worth mentioning. In late October of every year, the area is completely covered in trees with a beautiful golden color. This stunning view is often referred to figuratively as a "golden carpet," and it's truly a sight that's too beautiful for words.

Similar to Hokkaido, the peak foliage viewing season in 2019 for the Tohoku region is predicted to be later than the average year, but the chilly days will prod the leaves into gradually changing colors. The open fields are predicted to be around the same time as the average, but the mountainous areas are expected to be later. In the Tohoku region, an absolute must-see is the Naruko Gorge in Osaki, Miyagi. Located about 10 minutes by car from JR Naruko-Onsen Station, the picturesque gorge features steep, 100m-tall cliffs that stretch on for 2.5km. The Naruko Hot Spring is situated closeby, so you can take a soak in the waters while gazing out at the fall foliage.

In the Kanto area, the best time to see the fall foliage is from late October to late November every year. In 2019, with the influence of a lingering summer, it's been predicted that the temperatures for October are similar to average years and the temperatures for November will go up slightly compared to the norm. In accordance with this, the fall foliage viewing season in the plainlands are estimated to come slightly later than the average year. While there will be warm days during the season here on out, there will also be an increased number of days with chilly mornings and evenings mainly in the inland areas, which will push along the fall foliage little by little.

The recommended fall foliage spot in the Kanto region is the Showa Kinen Park in Tokyo. Within the park, there are two big areas filled with ginkgo trees: Katarai no Icho Namiki (98 trees, 300m) and Tachikawa-guchi Canal (106 trees, 200m). The park transforms into a tunnel of gold during the fall, and it is an extremely popular spot. The maple trees (approx. 300 trees) become vivid colors of red, orange, or yellow, and broadleaf trees like the Japanese zelkova tree, Japanese Judas tree, and Chinese tallowtree also change into stunning colors of the season. Each of these tree varieties have their own unique characters that can be enjoyed during the fall, and there is even an illumination event in the evening held in parts of the park during the fall foliage viewing season.

Mt. Fuji is the highest peak in Japan, and this standalone peak can be found straddling Yamanashi and Shizuoka Prefectures in the Chubu region. In addition to the Fuji Five Lakes, there are numerous spots in this area where you enjoy viewing the fall foliage along with Mt. Fuji. Lake Kawaguchi, which is among the Fuji Five Lakes, is especially popular, appearing in many tourism posters and in pictures online. The 2019 fall foliage viewing peak is expected to be the same as the average year, barring a few of the plainland areas, which are expected to arrive later than average to the slightly higher than average temperatures. Be sure not to miss out on the peak viewing season here!

In the Kansai region, the 2019 fall foliage viewing season is for the most part predicted to be scheduled around the same time as an average year. However, similar to other areas, November is seeing a trend of higher temperatures in November compared to previous years, and as such, the low-lying areas are seeing a slightly delayed viewing season. As for fall foliage spots in the area, the old capital of Kyoto is a definite must! Rurikoin is particularly famous as a fall foliage spot; entrance is typically not permitted to this temple, but it is opened to the public specially during spring and autumn. The beautiful contrast created by the combination of the charms of traditional Japan and the fall foliage is truly a breathtaking and magical sight to see. An avenue of dawn redwoods in Takashima, Shiga, is also gaining a lot of attention as it appeared in a popular drama in the past. Approximately 500 dawn redwoods line both sides of a 2.4km-long road, which beautifully change colors during the fall foliage season.

In the Chugoku region, the peak fall foliage viewing season in the plainlands is forecasted to be later than average. As for fall foliage spots in this region, Miyajima Momijidani Park in Miyajima, Hiroshima, (official name: Itsukushima) is particularly very popular. There are numerous sightseeing spots and historical buildings scattered around Miyajima, such as Itsukushima Shrine's grand torii gates, which seem to float in the vast Hiroshima Bay. There are also many wild deer living in the surroundings. You'll be guaranteed a great time here viewing the fall foliage and enjoying the various sightseeing activities on offer!

In the Shikoku region, only areas in high elevation, such as mountain regions, are expected to be in peak fall foliage at the average time of the year. In the low-lands, on the other hand, it is predicted to be slightly later than average. Among all the fall foliage spots in the Shikoku area, Kagawa's Kankakei Gorge, which is designated as one of the three most beautiful gorges in Japan and is one of the country's top scenic spots, cannot be missed. During the fall, the entire ravine becomes beautifully dyed in autumn colors, and it's truly a sight that anyone visiting this area must see at least once. There are many other leading spots with picturesque views around the Shikoku region, such as another place in Kagawa called Ritsurin Garden, the Iya Valley in Tokushima, and Nametoko Valley in Ehime. If you want to see beautiful natural views that have been around since long ago, make your way over to the Shikoku region!

In the Kyushu area for 2019, the temperatures from October onwards are expected to be the same as the average year across the board. The best time to see the fall foliage is predicted to be on schedule with the average, and there is very little effect carrying on to autumn from the heavy rain or typhoons in summer. There are many famous fall foliage spots in the Kyushu area, but we especially want to focus on Yabakei Gorge in Oita for this article. It's said to be one of the three best fall foliage spots in Japan, along with Kyoto's Arashiyama and Tochigi's Nikko. It takes about 45-minutes by car from the popular hot spring area Beppu, Oita, about 20-minutes by car from Yufuin Oita, and about 90-minutes by car from Fukuoka, Fukuoka. You can surmise just about how much nature you'll be seeing in the area, and it's easy to get to from many closeby sightseeing spots, so it's definitely a must for those visiting the Kyushu region. Since it's an extremely popular fall foliage viewing spot, it will get really busy with visitors just past 10 am, so it's highly recommended to arrive early on in the morning. There are illuminations in the evening as well, so it's a great idea to visit later in the day, too.

If you've finally taken a trip to Japan, you'll want to make the best of this experience, so be sure to match your schedule to align with the fall foliage season here! If you use this article as a reference when you're making your travel plans and visit during the best time to see the beautiful fall leaves, you'll be guaranteed some of the best travel memories. The peak fall foliage viewing times in this article are based on information reported by the Japan Weather Association on October 3, 2019. Please bear in mind that peak viewing times are subject to change as a result of variations in the weather.

*Note that fall foliage cannot be seen in Okinawa Prefecture, the southernmost point of the Japanese archipelago, due to its subtropical climate.