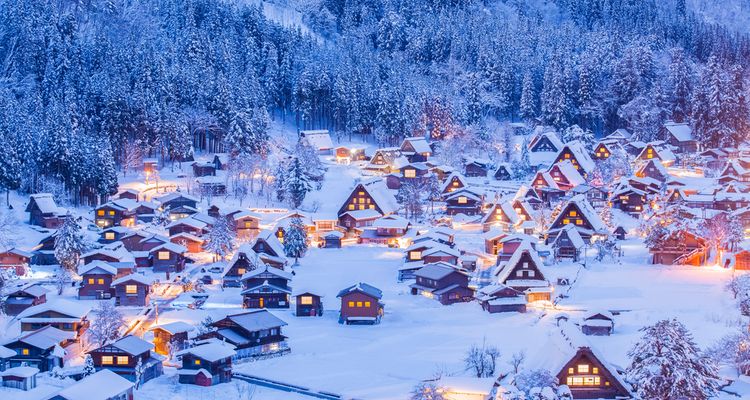 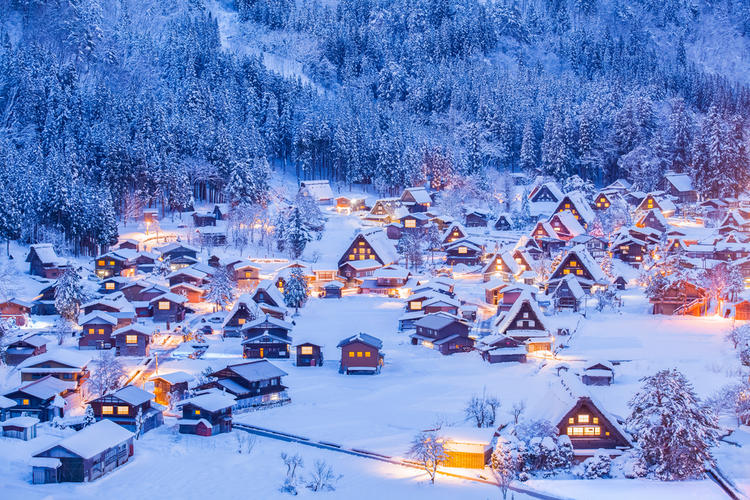 From the olden times Gifu prospered agriculturally and commercially thanks to the abundant water flow from the Kiso River. Here is a selection of historic sites in Gifu you may want to visit when you are in the area.

Shirakawa-go is a collective site of historic villages. It was registered as a UNESCO World Heritage site in 1995. In winter the area gets covered in heavy snow therefore thatched roofs of the traditional Gassho-style houses are steep to fend off the snow. Locals still live in those historic dwellings that look like they have come out from a fairy tale and some of them are preserved as places of interest and open to the public.

Originally named as Inabayama Castle, this castle on top of the mountain was renowned as an impregnable fortress. It was renamed as Gifu Castle by Nobunaga Oda, who ruled the area in the civil war era with the hope to use this castle as a stepping stone to rule the entire nation. Eventually the castle became obsolete but the central tower was restored and renovated in 1956.

Japanese civil war started circa 1467, which ended with the battle in Sekigahara in 1600.  Ieyasu Tokugawa won the final battle and reigned as the first Shogun in the wake of Edo era, which lasted for approximately 265 years. There is a museum in the battlefield site showcasing the overview of  this historic event. In 1891, the area was hit by a large earthquake with the magnitude scale of 8.0.  Neodani was the epicenter of the earthquake. The slip fault is designated as a special natural monument with valuable academic sources for geology. The museum displays the ruptured offsets. Legend has it that during the civil war,  Hideyoshi Toyotomi built this castle overnight under the instruction of his master, Nobunaga Oda.  Today the castle tower has been reconstructed as a museum displaying historical archives of Hideyoshi.

Take a bus from Gifu or Ogaki Stations (JR Line)

There is a so-called 'Spring of Rejuvenation (若返りの水)' in the park which was visited by the then emperor in AD 717. The site has become a multi-purpose park with the likes of waterfalls, shrine, and modern art exhibitions. This castle was the main fort for the western army during the Battle of Sekigahara. It lost its main tower during air raids in the last world war but was rebuilt in 1959. Today the site is used as a local history museum with various weapons used back then on display. The castle is small in scale and never really was regarded as one of the main castles in historic scenes, but its beauty captured many people for generations including the acclaimed Japanese author, late Ryotaro Shiba. The entire construction except for stone walls had been demolished in 1870 but the wooden main tower was rebuilt in 1933. Founded in 1313, this is a Buddhist temple in Tajimi. Kannondo was built in 1314 and Kaisando in 1352, both of which are designated as national treasures of Japan.  Traditional Japanese garden is stunning and the surrounding scenery is picturesque.

Take a bus to Kokeizan from Tajimi Station (JR Line)

10. The Ruins of Iwamura Castle (岩村城跡) Iwamura Castle is counted as one of the three greatest mountaintop castles in Japan. The area gets covered by dense fog hence the castle was nicknamed: "Foggy Castle (霧ヶ城)".  The castle itself was dismantled with just ruins of stone walls remaining in site. The stone walls were built utilising the steep, natural terrain, which is a beauty in its own right. Founded in 1347, this is one of the Ankokuji temples built across the nation by the Shogun of the time, Takauji Ashikaga. Its scripture house, constructed in 1408, is designated as a national treasure. The revolving library is the oldest of its kind in Japan. If you pray to the Buddha while it revolves, it is said to have the same effect as reading the entire sutra. Reservation required for viewing. Nangu Taisha has long been a holy place for worshipping god of mines and metals. The building was reconstructed in 1642. It is designated as a nationally important cultural property and is open to the public.

This storehouse of the diety to wish travellers safe journey was built in 1311 along the old ridge which is no longer used.  It is therefore located in a remote area within the mountains but it would be worth a trip to come and see this nationally important cultural property which is also the oldest building existing in Gifu. Founded in 746 by the order of the then emperor, this temple gradually lost its original form due to various wars but was restored during Edo period.  It stores a national treasure - a gold plated copper bowl with lions and arabesque patterns engraved.

Take a bus towards Obusa from Gifu Station (JR Line) Founded by the order of the then emperor in 1222, this Buddhist temple is commonly known as Kitta Kannon (吉田観音). It had lost its original form due to numerous fires over a period of time, but was reconstructed time and again. Many of the buildings on site including the main hall and the three-storied pagoda are designated as the nationally important cultural properties.

This spa town has been ever so popular for more than a century. It  is regarded as one of the three famous springs in Japan.  Its alkaline simple spring water is known to heal tiredness and to improve skin conditions. Isn't that a good news for exhausted travellers.