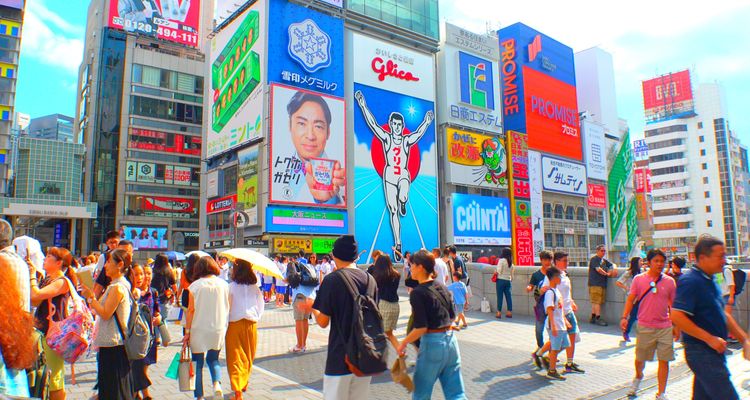 15 Ways to Enjoy Osaka On a Budget

Osaka is the second largest city in Japan after Tokyo. Osaka has been a business city since time immemorial, and it's also known as a gourmet town. If you go to Osaka, you'll hear Osaka-ben spoken by the residents rather than standard Japanese, so it's an experience for all of your senses. Here are some ways to enjoy this city without spending too much of your budget.

1. Survey the Town on the Loop Line  ~JR Kanjousen~

Osaka has lots of public transportation, and this JR Kanjousen circles the entire city! If you take the train straight through for about an hour, then you can see many sights of the city through the window like Osaka Castle and the various neighborhoods of the city. If you buy a ticket for just one station, when you alight you can calculate the precise fare. While you're on the train, close your guidebook and just alight at any station that catches your fancy.

2. Survey the Town ~Ride the Cablecar~

Since the people of Osaka were zealous about business, they were one of the first cities in the country to develop their own private railway before national regulations were set into place. Currently there are more than five companies offering rail transit in the area and each of them have their own idiosyncracies. There are many stations where the JR and the subway system lines cross so you can easily switch between them, so please grab a map and enjoy looking up different routes. You might be able to make memories you would've never dreamed about otherwise. The first area you should visit is the southern part of Osaka. The area between Shinsaibashi Station and Nanba Station overflows with energy. The Ebisubashi and Shinsaibashi shopping areas are full of flashy neon signs and the clamor of crowds. If you head west, you'll reach Midosuji, a street lined with gingko trees and high class shops. The contrast is really interesting to see. You can enjoy the view of the Dotonbori River that runs under Ebisubashi. Before summer kabuki events or local festivals, decorated boats go up and down the river in a process called "funanorikomi". Throughout the year the area around Ebisubashi and the Dotonbori riverside is always showy.

Shin-sekai is a popular area is filled with flashy neon signs and an enthusiastic energy. Originally it was an area where laborers gathered after work, so it's become a shitamachi area full of restaurants, general stores, and other shops. You should definitely try some famous Osaka meals like kushikatsu and okonomiyaki here. It's about a 5-10 minute walk from Doubutsuen-mae Station and Ebisucho Station.

6. Festivals ~Enjoy It As Much As Possible~

In Osaka, starting from June 30th, there is a summer festival held almost every day throughout July and August, and then from September to the beginning of November come the autumn festivals. While the Tenjin Matsuri held on July 24th and 25th is famous, you should definitely enjoy any festival you catch a glimpse of during your stay.

7. Relax at a Park ~Nakanoshima Park~ This is an oasis on the riverbank in the middle of the city. In May and October it is full of roses, while in mid-April, the riverbank becomes beautiful due to the blooming cherry blossoms. If you get tired of the crowds in Osaka and wish for some greenery, this is the place to go. Because the neighborhood around it has been a business area for centuries, you can enjoy both traditional and modern architecture from inside the park. It's right by Yodoyabashi and Kitahama Stations. Osaka Castle has a very wide park as part of its grounds. It's a place where they hold many events and you can enjoy the beautiful changing of the seasons through the blooming flowers, such as plum blossoms in February, peach blossoms in March, cherry blossoms in April, and autumn foliage in November. How about enjoying a relaxing walk around the castle as part of your sightseeing trip? It's right next to Osaka-jo Koen Station.

9. Float Down the River ～Take a Ferry～ There are 8 places in Osaka where you can take a free ferry. Before the development of overland routes, Osaka depended on ferries moving through its many rivers. If you walk ten minutes from Osakako Station to Tenpozan Ferry Terminal, you can take a 3 minute ferry to Sakurajima, which is where Universal Studios Japan is located. You can enjoy the bayside view of the city. Do you have chikagai in your town? Chikagai are underground shopping centers usually connected to subway stations. The chikagai in Osaka are so wide that those around Umeda are like mazes. Because there's no traffic lights or intersections, moving around in the chikagai is smoother than above ground. Between that and having one's attention caught by the stores lined up in a row on either side of you, it's easy to get lost. What about testing your sense of direction here? Kuromon Ichiba is called Osaka's kitchen. There are about 180 stores in this 1900 feet long shopping arcade offering a wide variety of products from fresh seafood to vegetables and miscellaneous goods. Just walking around and looking at things is enjoyable. Other than restaurants, there are free rest areas where you can eat what you bought. If you want to be completely satisfied with the food in extravagant Osaka, this is the place to go. It's right by Nipponbashi Station. This is another area called Osaka's kitchen. The Tsuruhashi Shoutengai (shopping arcade) is right by Tsuruhashi Station. There are many shops offering items from fresh and dried fish to Korean ingredients and clothing. This is an area where lots of Korean people live, so you can enjoy both Japanese and Korean meals here. The Korean barbecue is a must-try. Do you like instant ramen? Instant ramen was created by a Japanese person named Momofuku Andou. At this free museum that keeps the kitchen where he developed his invention safe and on display, you can make your own original cup noodles for 300 yen. It's only five minutes from Ikeda Station.

Something that is surprisingly famous about Japan is the bathrooms. Beginning with department stores, businesses began installing nice bathrooms for customers to use without charge, so please check them out if you so desire. The break room in the women's bathroom on the 3rd floor of the Umeda Grand Front southern building is breathtaking. It's about 3 minutes from Osaka Station. There are a number of places where you can gaze upon the city of Osaka, but the Daisan building in front of Osaka Station is one of the best. The restaurant floor on the 32nd and 33rd floor all have observatories that you can enjoy free of charge. Of course, you can also enjoy the view from the restaurants as well. It's only 5 minutes from Umeda Station and 8 minutes from Osaka Station.