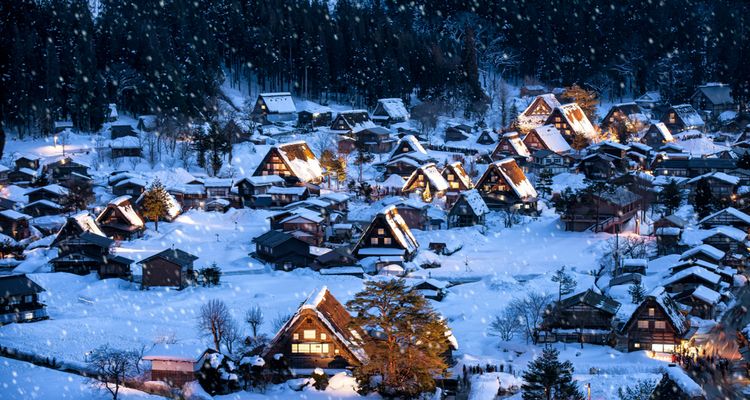 There are many beautiful fantasy-like places located in Japan from one end to another, that look like there were taken out from an anime or movie. This article takes you to 15 places in Japan that will take your breath away with their surreal landscapes.

Japan is blessed with many beautiful locations that look like it was just picked out from a fantasy book. These places will take your breath away and you would want to come back to visit them at different times of the year because with each season, its features change.

This article will bring you across the country to the top 15 places that will make you feel like you've stepped into a wonderland. Hokkaido's Biei is a famous tourist spot even among the locals and it is located next to Furano, which is famous for its lavender. The rolling hills in Biei cultivate various types of vegetables and flowers, creating a patchwork-like pattern across the fields with its vibrant colors. That is also part of the reason why Biei is known as the [Patchwork Road].  Take a stroll up and down the fields and you will feel like you were part of the cast in [Anne of Green Gables] or [Little House on the Prairie]. Somewhere in the middle of Hokkaido, there is a village called Shimukappu, where Mount Tomamu stands. People will flock to Hoshino Resort at Mount Tomamu to view the much talked about sea of clouds from the resort's terrace. The dream-like phenomenon can be viewed between the middle of May to October but it still depends on the how fair the weather is. You don't have to climb the mountain to view it because there is a cable car service that will bring you to the terrace that has enough space for large crowds to come and take in the view. As the light and fluffy clouds glide along, you might think of Pandora from the movie [Avatar]. For Ghibli anime fans, you wouldn't want to miss out on Kushiro-shitsugen, which is said to be the model for the location in the anime, [When Marnie Was There]. Kushiro-shitsugen, a wetland in the eastern region is an appointed national park. This is also a famous Japanese Red-crowned Crane habitat. The birds are known to make their public appearance in winter. The park is furnished with a viewing deck, where you can set your eyes on the vast wetland and witness the cranes. You can also paddle a canoe downstream. If you get to experience the fog blanketing the landscape, you would think back of the scene, where the little girl in the anime is on her way to meet Marnie. Do you know of [Gegege no Kitaro], one of Japan's famous anime? It is a horror anime that features a lot of Japan's own spooks and ghouls. Mount Osore at Aomori builds the landscape of the anime and alongside with Mount Hiei and Mount Koya, they make the 3 most famous spooky mountains in Japan. The mountain is also part of Shimokita Hanto Quasi-National Park. Mount Osore provides two contrasting landscapes; a brutal hell represented by it's rocky area and a beautiful beach paradise that stretches far and wide. A hike in this place is like an afterlife walk. Believe it or not, the scenery from the photographs above are all natural and not man-made. The rime forms around the trees when the water droplets in fogs or mist are subjected to rapid cooling and get blown against the vegetation on the mountain, resulting in monster-looking ice sculptures. You may be able to catch similar phenomenon at other mountains during winter, sometime in January and February. Doesn't the scene above remind you of the icy kingdom that Elsa built in [Frozen]? At a place called Bandai in Fukushima, there is a cluster of ponds called Goshiki-numa. Goshiki means 5 colors and the reason why such a name was given is because due to the different mineral content in each pond, each pond will emit different colors. For example, there is an emerald green and cobalt blue pond but at certain angles, the pond seems to be reflecting not 2 but 3 colors! The ponds are nature's gift to us (even though it may look as if someone might have just poured paint into them) and the colors will amaze us and make us think of the colorful confection landscape in [Charlie and the Chocolate Factory]. Kurobe Gorge is a national treasure and is part of a national park in Toyama's Kurobe. Board the Kurobe Gorge Railway all the way to the end, where you can then leisurely walk around the area to enjoy the scenery. This place is the most captivating during autumn when the leaves change colors, decorating the gorge with different hues. We wouldn't be surprised if the movie [Dolls] by director Kitano Takeshi got its inspiration from this place. Dougashima at Nishiizu in Shizuoka has a cave that has been appointed as a national natural treasure that can be accessed through a boat ride. Right in the middle of the cave there is a round skylight, where streams of sunlight would come in. The view inside the cave would remind you of the journey in search of the Fountain of Youth in [Pirates of the Caribbean]. The famous world heritage site, [Shirakawago] is located at Gifu's Shirakawa village. Undeniably, it is both famous and popular among tourists from all over the world. The houses are built using a traditional style known as gassho-zukuri. The village is beautiful in summer but the winter landscape brings a form of nostalgia that transports you back to an old Japanese children's story, [Kasajisoh]. In the middle of Lake Biwa in Shiga, where Shirahige Jinja is, stands a grand torii gate called Kochutorii. You will not regret waking up early to catch the break of dawn at this place. Long ago when people would come out in boats to worship at this gate, this gate was a very famous landmark. Besides having the famous Kochutorii gate, Shiga is also known for its history with ninjas and ninja villages. Shiga was the place for ninjas to come and train. [NARUTO] fans will probably notice the similarity between the view above with some ninja scenes in the anime.

You will be able to enjoy terraced paddy fields at Mie's Kumano's Maruyama area. Rice is being cultivated on the slope planes of the mountain and there are about 1340 paddy fields, making it the only place in Japan with that many fields in one location, and that's why that place is called [Senmaida] (which means a thousand fields). The beautiful terraced paddy fields would definitely remind you of when Totoro from Ghibli's [My Neighbor Totoro] stepped onto the Catbus for an amazing bus ride. Takeda Castle is Japan's own Machu Pichu. The castle ruins are located on top of a mountain and when the clouds roll in and the castle looms above it with the sun at its back, the view is purely majestic. Over the years it is becoming a popular tourist spot. Takeda Castle is truly a replica from Ghibli's [Castle in the Sky]. At Shodo Island in Kagawa, there is a sandy road that can disappear and reappear many times in a day depending on the tide levels. The road is called Angel Road and it is Japan's version of France's Mont Saint Michelle. It is said that if you walk down the road while holding hands with the one you love, your wish will come true. When the tide recedes and the road appears in the middle of the blue ocean, it is just like the scene where the train is crossing the sea in Ghibli's [Spirited Away]. This breathtaking waterfall is at Oguni, Kumamoto. This waterfall is quite a celebrity itself, as it is a popular location to shoot ads. It is not like any other waterfalls. In May during the Golden Week holidays, the waterfall will be lit up and you will get to view its beauty in another way at night.  Looking at the waterfalls, you'll feel like you are in Disney's [Pocahontas]. Yakushima is the one of the model backgrounds for Ghibli's [Princess Mononoke] and thanks to that movie, the number of visitors to the island has increased. It is estimated that the cedar trees on Yakushima are about 3000 years old, giving the island an ancient and eerie feel to it. When you take a walk in the woods, it might feel as if you are part of an RPG game with fogs suddenly forming or deers mysteriously appearing out of nowhere.

Japan indeed offers many beautiful natural places that look like they were peeled out from a fantasy land. These locations are just magical as they transform their looks based on the 4 seasons. The places mentioned above may be hard to get to but it is worth making the effort to enjoy them and we hope that you'll include them in your itinerary in your trip to Japan.