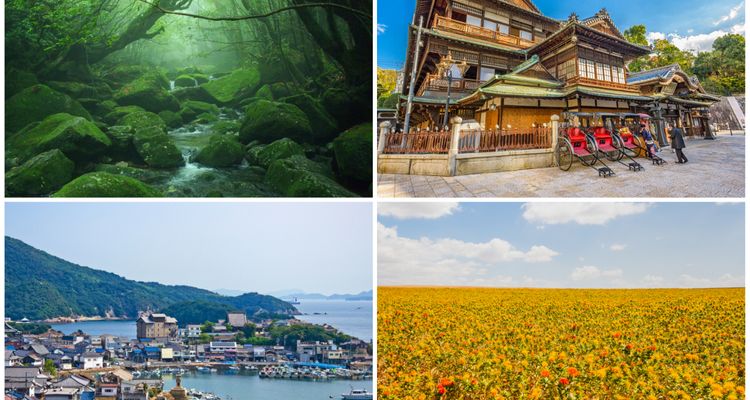 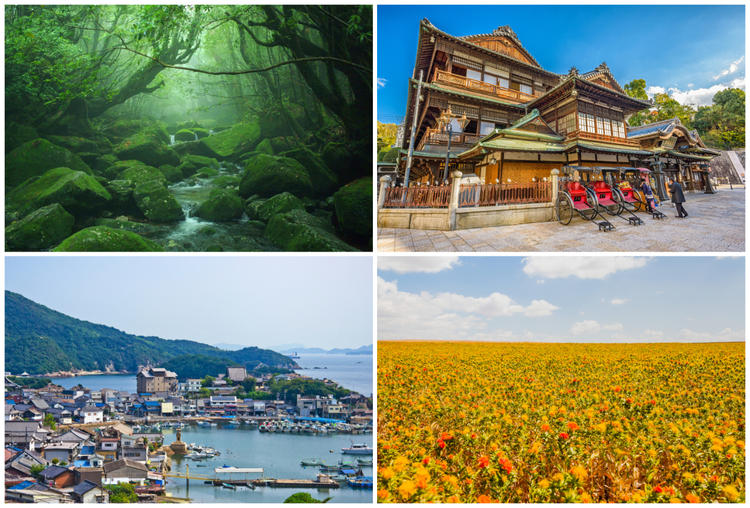 Animated films by Studio Ghibli are known for beautiful and mesmerizing sceneries. Here are some of the locations in Japan which are said to be the inspirations for such artistic settings. Aburaya is the iconic bathhouse in the film 'Spirited Away'. Dogo Onsen Honkan in Matsuyama, Ehime is said to be the model of Aburaya, although Jiufen in Taiwan is also considered as such. We support the former considering the storyline was in a Japanese setting. Yakushima is registered as the UNESCO World Heritage Site so that reason alone would make this island worth a visit.  You will be surrounded by the scenery from 'Princess Mononoke' as you trek to see the famous Jomon cedar.

This beautiful cityview of Tomonoura in Hiroshima is another spot not to be missed. Ponyo's house is believed to be inspired by Naramura Museum. The museum is open on Sundays so why not plan a trip to see it for yourself this weekend? It may not be quite a million dollar view, but if you are a Ghibli fan Seiseki-Sakuragaoka is worth visiting. This suburb is conveniently located just outside of Tokyo.  The highlight of the town is the staircase to the top of the hill where you can enjoy a typically Japanese nostalgic night view.

Seibien is a western style house with Japanese garden in Aomori featured in 'Arrietty’.  Its garden is counted as one the three greatest gardens of Meiji-era and is an attractive sightseeing spot.

6. Yokohama【From Up on Poppy Hill】 The city of Yokohama is depicted in 'From Up on Poppy Hill' and Negishi Natsukashi Park (The Old House of Yagishita Family) reminds of Coquelicot Manor, a boarding house overlooking the port in the film. There are many other spots not to be missed, such as Harbor View Park (Minato-no-mieru Oka Koen) .  There are 7 western style houses collectively called Yamate Seiyoukan in the area where you can read different edition of Weekly Quartier Latin, the newspaper featured in the film, at each house. There are many places that are believed to be the inspiration for the scenes of 'My Neighbor Totoro', including Sayama-Kyuryo Wetlands which stretches between Tokyo and Saitama. The location we particularly recommend is Totoro Bus Stop in Oita. It may not be the precise location featured in the film but the name of the bus stop and the ambience are simply spot on. You will feel as if the Catbus would appear from nowhere and whisk you away! This prestigious hotel founded in 1933 is said to be a spitting image of the hotel featured in 'The Wind Rises'.  Its façade is particularly identical. The roof and the terrace look as if they have popped out from the animated film into reality.  Staying at this attractive hotel alone  would be a memorable experience. Heroine Taeko travels on her own from Tokyo to Yamagata in this animated film. There are many sufflower fields in Takase District like the one depicted in 'Only Yesterday' where you can replay the scenes from the film in your mind. There are many locations in and around Tokyo featured in 'The Cat Returns'.  We particularly like Motomachi Shopping Street in Yokohama where Haru met Muta.  There are many stylish shops and boutiques making this street an ideal tourist spot

There are many Ghibli films directed by Hayao  Miyazaki and Isao Takahata. This latest film was directed by Hiromasa Yonebayashi who is an up-and-coming director.  Kushiro Wetlands is said to be the inspiration for the location of 'When Marnie Was There' with Mochirippunuma being the perfect setting.