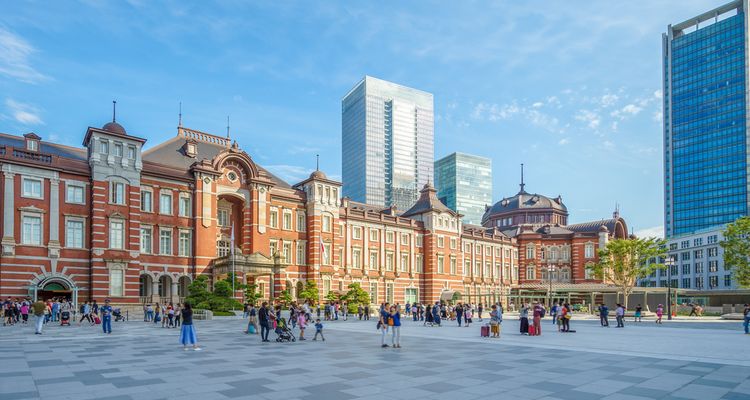 Top 10 Things to Do Around Tokyo Station

Tokyo, the capital of Japan, is an international metropolis that is the birthplace of many global trends. The iconic Tokyo Station is a gateway to the city granting access to visitors from all over Japan. Within and around this station, there are countless spots to explore that cover a wide range of activities including shopping, dining, art, and entertainment! This time, we'll be introducing 10 must-see sightseeing spots in and around Tokyo Station that you'll definitely want to take the time to visit!

Among the numerous historic buildings spread out across Tokyo, the Red Brick Station Building of Tokyo Station is particularly notable for its distinct modern, Western architecture. It was constructed in 1914, but the roof, inner walls, and southern dome were destroyed in the war. Reconstruction work began in 2006 with an effort to reinforce the structure to be both functional and earthquake-proof, and it was completed in October 2012. The station building was designated a National Important Cultural Property, and its history and appearance has earned it a reputation as "the face of Tokyo."

You will get to see a different side of Tokyo Station depending on a combination between the time of day, season, and the weather. You'll definitely want to snap a picture of the building, especially during rainy nights when the building is beautifully reflected on the ground! If you're traveling through Tokyo, you absolutely have to see this majestic sight for yourself!

Tokyo Character Street is a shopping street area with a total of 33 official shops of popular Japanese anime characters. It spans across a distance of roughly 80m and is constantly swarming with visitors from all over Japan and abroad! It's located in First Avenue Tokyo Station right outside the Yaesu ticket gates, so even within the vast maze that is Tokyo Station, it's not difficult to find! It's lined with stores of widely known characters including those that appear in the weekly Shonen Jump magazine like Naruto and One Piece, as well as Hello Kitty, Ghibli, and Pokemon. These shops sell limited edition goods that you can only buy in this location, so it's a spot that fans of Japanese anime and manga should make sure to visit!

3. Delight Yourself in Freshly Made Snacks at Tokyo Okashi Land

This area contains the specialty shops of the famous Japanese snack manufacturers Glico, Morinaga, and Calbee. It's also located within Tokyo Station in First Avenue Tokyo Station, and can be found right by the stairs of the Yaesu Underground Central Gate in front of Nozomi Square.

There's a kitchen set up within the store for each brand, and they dish out freshly made potato chips and almond chocolate that you can eat right away! There are many special edition products and exclusive souvenirs that you can only buy here, too! The event space within the area is also where various snack manufacturers set up their stores and sell their products for a limited period of time.

4. Indulge in Popular Ramen Shops From All Over Japan in Tokyo Ramen Street

Tokyo Ramen Street is an area where popular ramen shops from all over Japan have gathered together in one spot. Like the aforementioned Tokyo Character Street, this ramen block covers an entire section of First Avenue Tokyo Station. As of June 2019, there were 8 total ramen restaurants that set up shop here. All of these ramen joints are very popular, so it's not uncommon to see people lining up outside during lunch with a wait of 1-2 hours!

Rokurinsha, a restaurant specializing in tsukemen (thick ramen noodles that are dipped in a broth) and a rich, seafood based soup, is especially famous for the exceptionally long lines that form outside its doors. Take a trip over to Tokyo Ramen Street to try some of the best ramen in Japan!

The Pokemon Center, which is the official Pokemon store, opened its doors here in 2018, and is the largest Pokemon Center in the world with an area of 1,300 sq.m. There is a large selection of original goods such as miscellaneous items, toys, stationery, and snacks, and to add onto that, the world's first ever permanent Pokemon cafe is located right by it, so visitors can fully immerse themselves in the world of Pokemon. In response to the international demand for Pokemon that has taken the world by storm, the store has taken measures to provide support for foreign visitors, including the installation of a touch panel style Pokedex available in 9 languages. It's also easy to get to as it's just a 5-minute walk from Tokyo Station. When the Pokemon cafe first opened in 2018, it was an instant hit as it received a flood of over 13,000 reservations. You'll definitely want to reserve before you visit to secure yourself a spot!

6. Check Out the Free Museum and Get a Sweeping View of the Tokyo Station Area from the Rooftop Terrace of KITTE!

KITTE is a multi-purpose building complex located in front of the Marunouchi South Exit of Tokyo Station. The Tokyo Central Post Office was first built here, and the building continued to develop and now comprises over 100 stores. The building's name comes from its post office origins, as "kitte" means "postage stamp" in Japanese. The basement floor has restaurants and cafes, while the 1st to 5th floors contain apparel and general goods stores and restaurants serving traditional local Japanese foods. The 6th floor has an approximately 1,500 sq.m. rooftop terrace from which you can get a sweeping view of the cityscape of the Tokyo Station surroundings.

The view is stunning regardless of what time you choose to go, and it can be especially beautiful in the evening looking out at the station and the skyscrapers. The architecture of the KITTE building itself is also exceptionally beautiful, and it is well-known for having its interiors designed by the famous architect Kengo Kuma, who is currently involved in building the stadium for the 2020 Tokyo Olympics.

7. A Historic Symbol of Marunoichi and Tokyo, the Mitsubishi Ichigokan Museum

The Mitsubishi Ichigokan Museum, Tokyo is an art museum managed by the Mitsubishi Group, one of Japan's three major zaibatsu (financial business conglomerates). It's particularly notable for its red brick outer walls, and it was originally the first office building in the Marunouchi area, named Mitsubishi Ichigokan, which was built in 1894. It underwent reconstruction and was completed in 2010, when it opened as an art museum.

Most of the works featured here are of the western variety from the end of the 19th century. You can enjoy the artworks within a classic, English-style space that will make you feel as if you've jumped back in time. Not only is the building absolutely stunning, but there's also a garden within the facility that allows people to enjoy a little slice of nature. Why not take a picture with the red brick building in the background or spend a relaxing moment within the gardens?

Cafe 1894, which can be found within the museum, was restored from a space that was formerly used as a bank business chamber during the early 1900s. It is currently gaining a lot of attention for their broad selection of alcoholic drinks, so you can enjoy a pleasant time here even in the evenings within its stylish walls.

The Tokyo Station Gallery is an art museum that opened within the Marunouchi station building of Tokyo Station in 1988. The museum mainly features modern artworks and holds exhibitions with concepts based on trains and the like.

The exhibition room on the 2F, which, surrounded by the iconic red bricks of the station, is extraordinarily popular. There's a museum shop connected to the museum which sells items related to the exhibitions and trains, as well as art-related goods from all over the world.

9. Bask in the Harmony of Nature and History at the Kokyo Gaien National Garden

Housed within the grounds of the Imperial Palace is the palace in which the Emperor of Japan resides, the Imperial Household Agency (government agency in charge of matters regarding the Imperial Family) and the Kokyo Gaien (Imperial Palace Gardens), a national garden where you can feel both the history of Japan and the bountiful nature surrounding you. Its highlights include the Sakurada-mon Gate, which was designated a National Important Cultural Property, the statue of the righteous military commander Kusunoki Masashige, the Nijubashi Bridge, and more. Near Wadakura Fountain Park, which is also within its grounds, there is a restaurant that closely resembles an opera house. Recitals are actually held here, so you can enjoy a meal while listening to the sounds of a classical piano. It might be a good idea to stop by for lunch or dinner after a stroll through the parks!

In addition to a total of 4,000 pieces on exhibit including paintings, swords, and tea ceremony items, the Mitsui Memorial Museum also exhibits a stamp collection consisting of 130,000 stamps from all over the world. Among the many items on display are National Treasures such as the "Pine Trees in the Snow" painting, and the "Unohanagaki" Shino ware tea bowl. There is a total of 6 National Treasures, 75 Important Cultural Assets and 4 Important Art Objects, all of which you can observe from up close, and the museum itself was designated as a National Important Cultural Asset in 2005 as well. It was built from Italian marble and there's a very regal atmosphere inside. The numerous valuable items housed within are breathtaking, but the museum exterior itself is a work of art too!

As you can see, Tokyo Station has plenty of things to see and do for almost everyone. Just remember that it may be hard to fit everything on this list in a single day. Still, there's nothing stopping you from coming back to explore some more on a separate day!