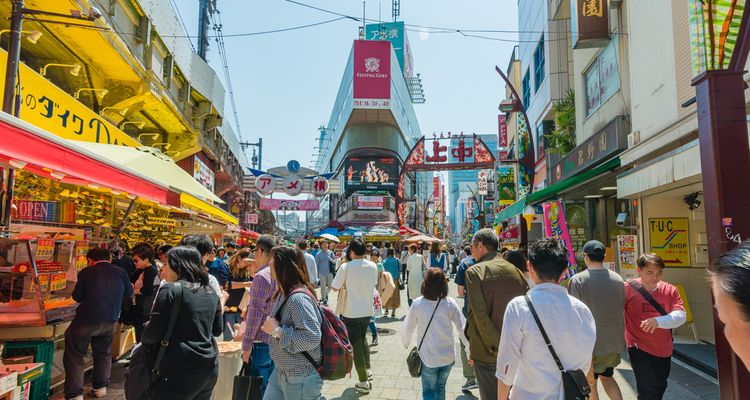 With its great access to both Narita Airport and the Tohoku region, the Ueno area can be called a staple of Tokyo tourism. There are many spots where you can feel surrounded by the culture and history, especially around Ueno Park, where you’ll find many museums and art galleries. With that, here are 10 great photography spots around Ueno.

JR Ueno Station is a very large station where many train lines pass through, like the Yamanote Line and the shinkansen (bullet train). From tourists to shoppers and businessmen, there are many people who use the station every day, so you can take photos of this bustling Tokyo environment.

Although the station seems complicated like a maze, there are many signs and directions so you don’t have to worry about getting lost. One of the platform areas has 2 floors; if your timing is good, you can see the rare sight of two trains lining up above and below each other.

Ueno has many museums and cultural facilities, giving it a reputation as an art town; You can see sculptures, frescoes, and other public art pieces installed all around Ueno Station. A particularly popular one is a gigantic fresco above the Central Gate that makes quite an impact! This piece was created by Inokuma Genichiro, a Japanese artist who produced Western-style paintings.

Ueno Park (Ueno Onshi Park) is located just outside the Ueno Park Exit of Ueno Station. It's a must-visit place for anyone who goes sightseeing in Ueno! Ueno Zoological Gardens, Japan’s oldest zoo, is located inside the park. There are over 500 species of animals kept here, and one of the most popular ones is the giant panda. You'll feel a sense of calmness just watching the panda relax and go about its life without a care in the world!

With over 500 species of animals, this zoo has the second highest number in Japan. Not only do they have classic zoo animals like lions and elephants, but also quite rare ones like the above-mentioned panda and okapi with their zebra-striped legs.

The panda statue at the entrance is a classic spot to take a picture. With the animal statues, the countless number of cute animals, a retro monorail, and the seasonal changes, you’ll never run out of things to snap even if you're here for a full day.

Shinobazu Pond is a natural pond inside Ueno Park. It has been known as a lotus flower viewing spot since the Edo era (1603-1868), and you can see them in full bloom from July to August. There is a Bentendo temple in the middle of the pond that makes for a very nice photograph depicting Japanese aesthetics. The lotus flowers bloom from early in the morning and close back up by noon, so if you want to catch a glimpse of them, it’s recommended to go in the earlier hours of the day.

In the areas where there are no lotuses blooming, you can go for a boat ride. The colorful swan-shaped boats are perfect photo props. Both the boats leisurely sailing on the water and the ones anchored on the shore make for great pictures.

Ueno Park is very famous for their cherry blossom trees, with many flowers blooming around Shinobazu Pond. It’s incredibly crowded during this season, however, so if you want to take photos of the scenery here when it's quiet, it’s recommended that you visit in the early morning.

Kiyomizu Kannon Temple has a large vermillion platform overlooking Shinobazu Pond from the top of a cliff. It was built in 1631 and was modeled after Kiyomizu-dera Temple in Kyoto. Below the temple’s platform, there is a strange pine tree called the Tsuki no Matsu (moon pine) that has curved, rounded branches to resemble the moon. It’s quite a popular photo spot!

Try taking a look at Shinobazu Pond from between the pine branches like in an Utagawa Hiroshige painting! He was an ukiyo-e artist who was said to have influenced great masters of Impressionism like Claude Monet and Vincent Van Gogh.

During cherry blossom season, the lit-up temple has a magical atmosphere. Whether you’re looking up at the temple from below or gazing down at the park from above, you’ll surely be able to take some beautiful photos.

The Nikko Toshogu Shrine, which is located in Nikko City in Tochigi Prefecture, is where an Edo era Shogun is enshrined, and is popular with both local and foreign tourists. As a matter of fact, there is also a shrine in Ueno Park that has the Toshogu name. Ueno Toshogu Shrine features gorgeous decorations just like its counterpart in Nikko. It’s a building that looks great in photos.

The golden building has a big impact even from afar, but try to get close to it and have a better look. The three-dimensional carvings are extremely detailed and precise. It has fewer visitors than the Nikko Toshogu Shrine, so you can take your time and appreciate the art.

The road approaching the shrine is lined by many stone lanterns and they make for a popular photo spot! There are over 200 of these stone lanterns, which were dedicated to the shrine when the main building was built in the 17th century. They are very large, easily surpassing a person’s height. The patches of moss growing on them here and there make their long history even more apparent.

The Shitamachi Museum is a museum that recreates the shitamachi (old working class areas) that were lost during WII and the Great Kanto Earthquake of 1923. The townscape has traces of the Edo period that you don’t usually see in Tokyo these days. While walking around, you can actually touch the old electronics and furnishings and take photos of them.

The entire museum has the feel of a movie set, and you can take lots of interesting photos. The exhibitions change depending on the season, and there are also demonstrations of traditional crafts at different times, so you can enjoy yourself no matter when you visit.

At the sweets display, you can buy cheap candy called dagashi for under 100 yen. You can actually play with the toys that children in the olden days used! The dagashi are mini-sized and come in colorful packaging, so they look great in photos. The toys are naturally popular with children, but even the adults are captivated by them.

The National Museum of Nature and Science is an integrated science museum on the grounds of Ueno Park. The main building was built over 100 years ago, and is familiarly known by the name “Nippon-kan."

The blue whale statue standing outside is said to be the symbol of the National Museum of Nature and Science. It’s a 30m-long massive statue, and the curve of its body gives it the fascinating appearance of look as if it's about to move at any moment. You’ll be able to take a good picture from both close and far away.

You can also take photos inside the building, but selfie sticks, tripods, and flash are not allowed. There is a vast range of exhibits, from mounted specimens and skeleton displays to space technology, so you can learn while having fun.

The red torii gates that you can see between the rows of buildings belong to this shrine. Shitaya Shrine is located around a 6-minute walk from Ueno Station.

The interesting thing about this shrine is the ducks that run free around the premises. The ducks are very friendly and if they’re in a good mood, you can pet them!

Ameya Yokocho is a shopping street located between JR Yamanote Ueno Station and Okachimachi Station, and is known by its abbreviated name “Ameyoko." It’s a lively shopping street that has about 400 shops crowded together in a 500m space. Its unique and chaotic atmosphere is popular not only with locals but also foreign tourists as well.

At Ameyoko, you can buy food, clothing, and more at astonishingly cheap prices. There is a huge variety of goods available here, but you don’t even have to buy anything - just looking or taking photos is enough to have fun!

Ameyoko has a history of over 70 years and there have been many izakayas (Japanese pubs) around since the old days. The people sitting and drinking on the chairs in the narrow alleys lit up with Chinese paper lanterns make really great photo subjects. Alcohol lovers should take the chance to drink here, too!

Kyu-Iwasaki-Tei Garden is located about a 13-minute walk from Ueno Station. The Kayacho building is the former residence of the Iwasaki family of the Mitsubishi zaibatsu (a large Japanese business conglomerate), and the garden has been made into a public park. There is a Western-style building, a Japanese-style building, and a billiards room within the premises. The Western building was designed by English architect Josiah Conder and is a registered Important Cultural Property.

On weekdays, you can take photos inside the building. Please observe the rules regarding flash photography and tripods before you start taking photos!

As mentioned above, Kyu-Iwasaki-Tei Garden has both a Western-style and a Japanese-style building. From the Japanese building, you can gaze out over the traditional Japanese gardens. If you go first thing in the morning, the grounds are relatively empty so you can leisurely take photos.

We’ve introduced 10 photo spots that range from the usual to the little-known. You can take photos of the ever-lively town of Ueno throughout the year and make many great memories that you can keep with you!