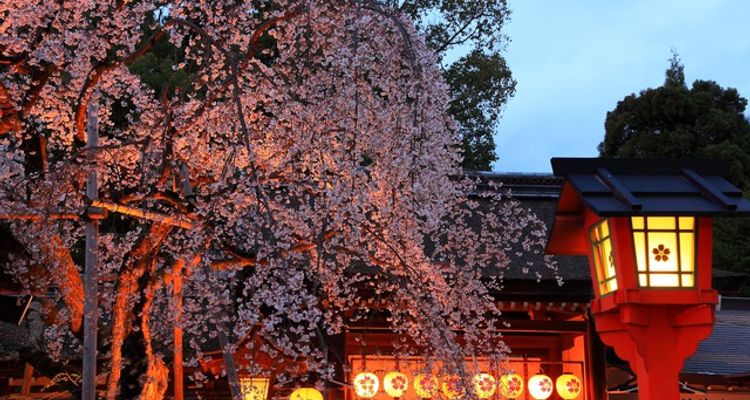 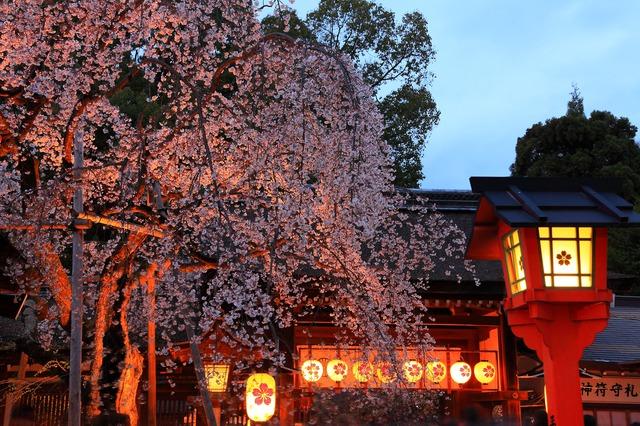 Hirano Shrine is the good spot for viewing cherry blossoms. Ouka Festival is held there on April 10 every year. In the middle of the Heian period, the emperor Hanayama planted thousands of cherry trees in its precincts. Now there are about 400 cherry trees of 50 species. During the Edo period, the shrine became famous as "Hirano-no Yozakura (Night cherry blossoms of Hirano)" all over the country.

Access: Get off Kitano Hakubai-cho Station of Keifuku Railway Kitano Line and walk 10 minutes to the north.

Aoi Festival started in the Heian period when the Imperial Court of Kyoto was flourishing. Its highlight is the march of people dressed in gorgeous aristocratic costumes. It is held on May 15 at Shimogamo and Kamigamo Shrines in Kyoto. It is a festival with a history starting in the first year of Konin (810), and an attractiveness different from that of the samurai period, which is well-known to foreign people. You can enjoy the world of elegant traditional Japanese Heian period. Yabusame Shinji (horseback archery) is also a must-see, in which people compete with each other in their skills. Gion Festival is a traditional festival of Yasaka Shrine, and it has continued since the 9th century. It is known as a festival for Kyoto citizens, and held for a whole month of July. Among several events, "Yoiyama," a parade of 23 decorated floats is especially famous. Shijo Street, the center of Kyoto is blocked, and festival floats mounted with a decorative halberd called "Yamahoko" are pulled by the citizens, parading in the Shijo Area. There are also a lot of stalls in the area, allowing you to enjoy the food of Japanese festival. Fireworks show is a big summer event, which is often seen in Japanese films and anime. Please experience the summer tradition of Japan watching people in Yukata and retro-looking stalls. There used to be a lot of fireworks in Kyoto, but now many of them are not held temporarily. Let me introduce Lake Biwa Fireworks in Shiga Prefecture, 10 minutes from Kyoto by JR train.

Lake Biwa is the largest and the most beautiful lake in Japan. Please visit it because it has a good access from Kyoto.

Access: From Kyoto, get on a train of JR Biwako Line, get off at Otsu Station, and walk for 10 minutes. This is an event held at Mt. Daimonji and other mountains in Kyoto, on August 16 every year. Okuribi is a Buddhist event. Letters are made with fire in five temples of Kyoto, going half around the town. It is familiar to citizens as a summer tradition of Kyoto. Jidai Festival is one of the most recommended festivals of Kyoto. The parade of this festival has a story, and you must see it along the history of Kyoto. Starting from the domination era of aristocracy, through the domination era of samurai, to the era of Meiji Restoration, you will be able to enjoy each performance and beautiful costumes. Arashiyama Momiji Festival is held at Arashiyama in November. It is a festival replicating the boating of people of noble birth in the Heian period. The area is a little far from the center of Kyoto, and there is beautiful and gracious nature. How about watching this festival in addition to Tenryuji, the world heritage site?

Period: the 2nd Sunday of November

Hatsumode is visiting to a shrine on January the 1st. It is believed that Japan has many kinds of gods from ancient times. Japanese people are very generous about religions, and it is integrated into our everyday life. Therefore people go to the temple on the New Year's Eve to ring a bell, and visit a shrine on the New Year's day. This is done very naturally, so it is very interesting.

You can see many women wearing gorgeous kimono. There are a lot of stalls in the fair of Hatsumode, so you can enjoy eating B-grade gourmet such as takoyaki(flour dumpling with octopus), yakitori(grilled chicken skewer) and yakisoba(fried noodle).

It is held in Shimogamo Shrine of Kyoto on January 4, reproducitng "Kemari," the elegant sport played in the court of the Heian period. Briefly speaking, "Kemari" is like an ancient football. It seems like a competition at first glance, but it is carried out based on a traditional etiquette. The traditional ritual is held by people in colorful costumes of government official with unique shouts, which is overwhelming. Setsubun is a Japanese traditional event held on February 3 every year. People throw beans with the wish of the good health in many homes. Maiko(Japanese dancing girl) wearing gorgeous kimono throws beans in precincts of Yasaka Shrine. This is a good chance to see Maiko, who can rarely be seen in other places than Gion-cho.

How did you like them? According to the US magazine "Travel+Leisure," this year, Kyoto became the 1st in the ranking of cities in the world which people want to visit. When you come to Japan, please experience traditional events in the ancient capital Kyoto.