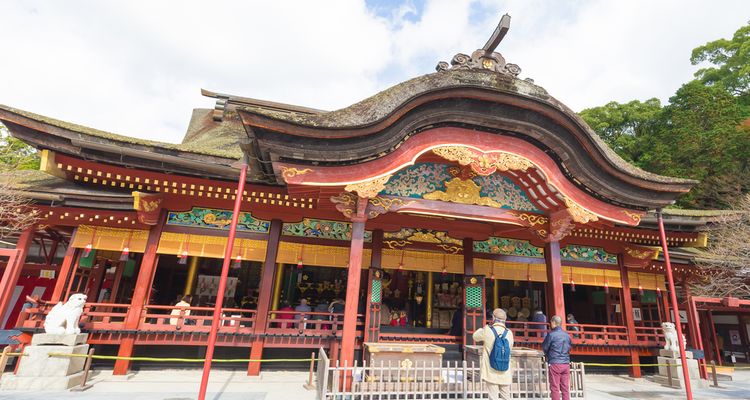 There is a wide variety of interesting architectures in Kyushu with some of them embracing east-meet-west elements. Here are our 10 selection of the must-see historical architects in Kyushu. Dazaifu Tenmangu is where the god of academics, sincerity, and protection from misfortune is worshipped. Its origin goes back to more than 1000 years ago. The shrine is also known for plum trees with approximately 200 types in the vicinity. Almost 6000 plum trees are in in full bloom from the beginning of February to March, which is quite spectacular and not to be missed.

Built in 1910, this wooden architecture depicts the style of  theater in Edo Period and is used for entertainment to this day. You can visit for a tour on days when there are no performances. (Admission Fee: 520 yen for adults, 260 yen for elementary/junior high school students) 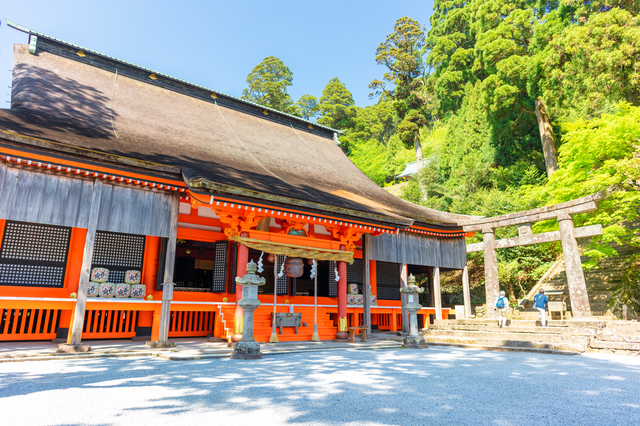 Hiko-san is a holy mountain from ancient times.  The shrine is located on the center peak of the three peaks. The view of the architecture from the middle of the mountain is spectacular. The current building was erected in 1842 and is designated as Important Cultural Property by the Japanese government. Not only the buildings are eye-catching but also the magnificent view surrounding Hiko-san is something to be admired all year round. Hashima Island is commonly known as 'Gunkanjima' as it looks like a battleship (Gunkan) from a distance. It is an abandoned island with some buildings still in sight, including the oldest apartment block by steel in Japan, built in 1916.  It is rather phenomenal seeing buildings and the island itself, once populated within a tiny space of land, slowly depreciating in front of your eyes. Recently UNESCO has recommended  the site to be registered as Cultural World Heritage. Built in 1865, this is the oldest existing Christian church in Japan and declared as a National Treasure by the Japanese government. Since it is located outside the city center the church narrowly escaped the atomic bomb during the war. The architecture of the cathedral is remarkable but the statute of Virgin Mary by the entrance is also awe-inspiring. Western architectures and residential buildings of merchants in the olden days are some of the popular sightseeing spots in Nagasaki and Glover Garden is one of them. Here you can find unique architect styles such as the mesh-patterned ceiling on the balcony and tiled roof on a western architecture. This is one of the famous power spots in Japan with the history of approximately 1900 years. The current shrine with its grand and stately appearance was constructed in 1778. Surrounding scenes like Takachiho Gorge and waterfalls are also astounding, you can almost feel spiritual vibes from both Shrine and Mother Nature.

This temple is the oldest wooden structure in Kyushu and is a National Treasure. The main hall is said to be constructed in the 12th Century. The architecture is unique for adopting Heian-style, which is rarely seen outside of Kansai area.  The beautiful scenery of autumn leaves in late fall is breathtaking.

The current shrine was built in 1801. It adopts an architecture style unseen at any other shrines so that alone makes this place worth a visit. The best season is spring to early summer as you can make the most of viewing a pond surrounded by iris and azalea garden.

Once a family resident of a local wealthy merchant, this house was built at the end of Edo era. There are many buildings with white walls in the neighbourhood and this is no exception. It is open to the public and the likes of  elaborate interior and a wide adobe floor can be viewed.  Another place of interest worth visiting in the nearby area is Sugimitsu Toki-ten (杉光陶器店 - Sugimitsu Ceramic Shop), the building of which was also built in the late Edo period.