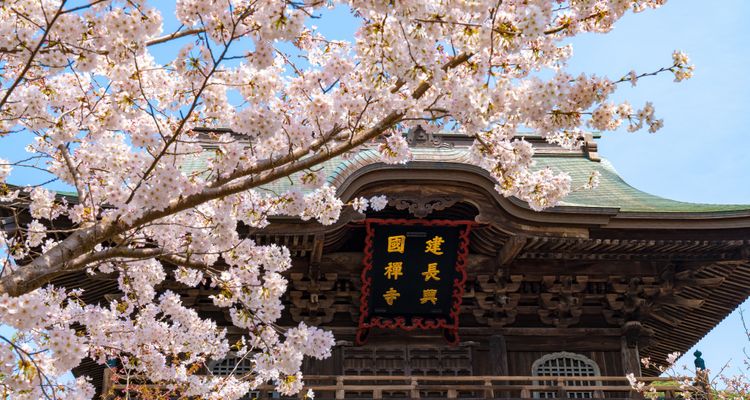 10 Hanami Spots in Kamakura: You can enjoy the elegance of this ancient city just 1 hour from Tokyo!

Kamakura city in Kanagawa prefecture which is just an hour from Tokyo by train, faces the city and has a calm atmosphere. It has many temples and is popular as a place where you can casually enjoy a historical, Kyoto-esque environment. If you visit during sakura season, you can savor an even more Japanese atmosphere. Here are 10 recommended temple-centric sakura viewing spots in Kamakura. This is one of the large Buddha statues (Daibutsu) that you often see in Japan guidebooks located in Kamakura. The Daibutsu in Kotokuin is said to have been made in the 13th century and in the spring, a wonderful sakura tree blooms to the right of the approximately 11m tall statue. Daibutsu and sakura. It’s hard to find a more Japanese scenery that this. Of course the Daibutsu is wonderful to look at in other seasons as well but if you visit during sakura season you can take a photo that’s good enough to be published in any guidebook. There are about 50 trees planted on the grounds. Although the Daibutsu will steal your attention, be sure to try walking around the historical temple and the grounds while you view the sakura.

Tsurugaoka Hachimangu is a shrine with many tourists even for Kamakura. Said to have begun around the 11th century, the current main shrine was constructed in the 19th century. The spacious grounds have many sakura trees planted there as well as all sorts of other highlights.

The Genpei pond is particularly recommended. The blooming sakura trees along the side of the pond have branches that reach into the water. The reflection on the pond and the petals that have fallen to the surface of the water are as beautiful as a painting and you might find yourself having a hard time moving away from there. Access: 10 minute walk from Kamakura station on the Enoshima Electric Railway and the JR Yokosuka line

Kenchoji is a buddhist shrine that was built in the 13th century. It’s a quiet place surrounded by mountains. There are sakura trees there to greet you as soon as you enter, which will surely make you happy. Not only the shrine grounds, but the surrounding mountains also have sakura trees planted. The shape of the sakura trees are lovely and when they’re in full bloom it’s so much that you can’t see through to the other side. The grounds are dotted with historical shrines so you can have fun walking around and exploring a bit.

The sakura near to the triple gate (which is one of the country’s Important Cultural Properties) is a particularly beautiful and popular spot. The sakura branches that stretch out and surround the gate are so lovely it’s almost like they were planned. Even the majestic triple gate gets a gentle atmosphere when surrounded by sakura.

Genjiyama park is park on top of a gently-sloped mountain. It’s a 20 minute walk from the station which is a bit far and the park itself has many ups and downs so be sure to wear easy-to-walk-in shoes when you go. There are about 200 sakura trees planted. You can gaze at the sakura while you’re hiking or sitting on the lawn. Inside the park is the “Kuzuharaoka Shrine” and the front of the torii (shrine archway) has become a popular spot for viewing the sakura. In the nearby shops there’s a popular item sold called “Tama konnyaku” (konnyaku has a unique texture and is made from the konnyaku yam. Here it’s made into a circular shape and cooked with soy sauce) so be sure to buy it and give it a try. Just the park is on top the morning and the view is outstanding. You can see the town of Kamakura and the ocean beyond. Enjoy looking at the sakura while a warm wind blows around you.

Access: 20 minute walk from Kamakura station on the Enoshima Electric Railway and the JR Yokosuka Line Hasedera is known as Hananotera (flower temple) as it’s a temple with flowers blooming all year round. Precisely because it has the name of "Kamakura’s paradise, Sukhavati", the inner grounds are beautifully arranged and there’s a calm atmosphere. Since there’s so many other flowers apart from the sakura, you can enjoy looking at many different kinds. On the grounds there are many statues of Buddha. The “Hana Matsuri (Flower Festival)” is held on April 8th, the birthday of the founder of one of the sects of Buddhism and there are many flowers made as offering to the surrounding statues, turning the grounds bright and brilliant. This festival also coincides with sakura season so be sure to visit.

There’s a traditional Japanese garden inside Hasedera. In here there are also various kinds of plants and based on the season the appearance of the garden can change. The scenery of the sakura in full bloom near the pond is surely a paradise. Komyoji is a temple that you can access by bus from Kamakura station. Since there are comparatively few people that venture far from the station, you can enjoy viewing the sakura here at your leisure. The weekends during sakura season has sakura viewing parties and you can have powdered green tea (matcha). Another name for Komyoji is “Momiji Tera (Maple leaf temple)” since it’s famous for it’s fall colors but in some cases it’s also called “Neko Tera (Cat Temple)”. There are currently about 10 cats living on the grounds. Among these, there are those that are friendly to humans and they will pose when you have a camera. Definitely take photos of them together with the sakura.

The garden in this temple is called “Kinushi Garden” and it’s famous for the water lilies that bloom in June but even during the sakura season, it’s beautiful to look at. “Taiseikaku” is an octagonal temple in this garden where they hold sakura viewing events as well.

Access: From Kamakura station on the Enoshima Electric Railway and the JR Yokosuka line, 10 minutes by Keikyu Bus #7 Kogyu bound for Zushi Station and 1 minute walk from Komyoji-mae bus stop.

If you ride the JR Yokosuka line or the Tokaido Main line, around Ofuna station you can see a giant white statue from the train window. This is the Kannon statue known as Byakue Kannon (Goddess of mercy of the white robe) at Ofuna Kannonji Temple. Although the statue is only a bust, it’s about 25m high. During the day, the statue appears pure white but when evening falls, the color changes to an opalescent shade. The Kannon originally has a gentle expression but during sakura season, she appears even more ladylike. In sakura season you can enter the area for free from 5-8 pm and the area is illuminated. The lights on the Kannon give her an even more mystical atmosphere. Myohonji is located deep in the mountains surrounded by quiet and nature. It’s so comfortable that you’ll find yourself unconsciously taking deep, relaxing breaths. In addition to the Yoshino cherry trees which you often see in Japan, you can also see other varieties like the Shidarezakura (weeping cherry blossom), Yaezakura (double cherry blossom) and more. The Yaezakura have many blossoms which are characteristic for the way they wave like frills. When compared to the usual Yoshino cherry trees, these give a cute impression. Definitely try and look at the blossoms up close and observe the difference. The best time to see the Yaezakura is a bit later than the usual Yoshino cherry. Furthermore, there is a flower called Kaido that blooms when the Yoshino cherry is over. It’s similar to sakura but the color is deeper and it’s a shorter tree. You can enjoy looking at it until around late April.

Access: 8 minute walk from Kamakura station on the Enoshima Electric Railway and the JR Yokosuka line.

Honkakuji is a temple close to Kamakura station that was established in the 15th century. It’s known as a famous area for the Shidarezakura (weeping cherry). Although there are not many in number, the trees themselves are quite large so when they’re in full bloom it’s quite impressive. Since the branches face downwards, the flowers are much closer to you.

Since there aren’t many sakura trees, despite being close to the station there isn’t that many people. That’s why based on the times that you go, you might get them all to yourself.

There are cute statues under the Shidarezakura. This one is a Jizo-sama, one of the Buddhas. Because it is said to protect children, it wears a childlike hood and bib. It almost appears to be looking forward to seeing the sakura from it’s special seat.

Access: 5 minute walk from Kamakura station on the Enoshima Electric Railway and the JR Yokosuka line. The sakura blooming here is quite similar to the Yoshino cherry, but actually it’s a variety originating from Kanagawa prefecture called “Tamanawa sakura”. It blooms faster than the Yoshino cherry and the color of the flowers is just a little deeper and it’s characterized by having a long viewing period. The stone monument at this shrine has a romantic poem engraved into it. The poem roughly means “My heart will not crumble as easily as the cape overlooking Kamakura”. This is certainly a good spot for lovers who want to view the sakura.

In Kamakura, you can enjoy grown-up sakura viewing in a calm atmosphere. It’s a convenient location that you can visit from Tokyo as a day trip. For those who don’t have time to go to Kyoto, why not look at the sakura while immersing yourself in the historical atmosphere of Kamakura?