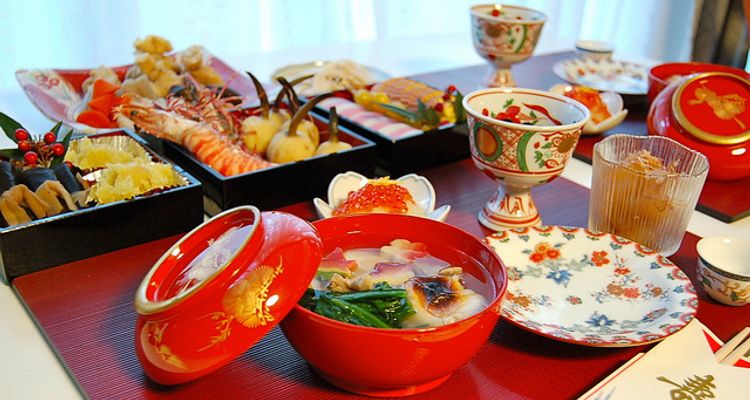 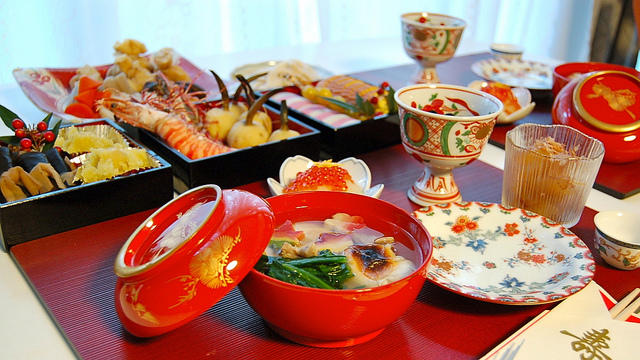 Know how a typical Japanese end and start of a year looks like? Here are 16 topics to show you through!

End and starting year customs differ from country to region. Here's a really basic version of how a Japanese end and start of a year looks like.

Starting off with end of the year. Not just vacuuming the floors. I mean scrubbing the windows, window stills, climbing on chairs to get that piece of dust you normally can't see. Thoroughly cleaning the house is called Oosouji (大掃除). In Shintoism, there is a god called Toshigami Sama (年神様). It is a god that is believed to come once a year in the new years and brings well being and prosperity within the household. Most of the traditional customs regards the New Year's have some relation to Toshigami Sama. In this case, cleaning the house is a way to welcome the god to the house. There is a custom calling Nenga Hagaki (年賀はがき), which means New Year's Postcard. People send each other these cards in form of greeting people in the New Years. The contact lists are enlargened to business partners to friends, so the number of postcards being sent to the post office are extremely large. Therefore, the post office recommends people to send New Year's postcard before 1/1. They start dealing with these postcards from 12/15 up to 12/25. Mostly likely then your postcard will be sent on 1/1! A standard Osechi (おせち) has the following dishes; Iwai Sakana (祝い肴), Yaki Sakana (焼き肴), Su no Mono (酢の物), and Nimono (煮物). Iwai Sakana, meaning celebration side dish, contains foods that are considered lucky and has puns. For example, Kuro Mame (黒豆), meaning black beans, has the pun being a hard worker. Yaki Sakana, meaning fried side dish, contains fried yellow tail, shrimp, and so on. Su no Mono, meaning foods in sweetened vinegar. Nimono means cooked food. These dishes are set into boxes, called Ojyuu (お重), and to be eaten during the New Years. Some people order Osechi from restaurants, some people make them from scratch, and some people don't eat them at all. Kagami Mochi (鏡餅) looks like a food pyramid; a round rice cake on the bottom, a smaller round rice cake in the middle, and a orange on a top. The Kagami Mochi is said to be the place where the Toshigami Sama rests during the New Years. It is placed on high grounds. A standard Shimekazari (しめ飾り) will be a rope twisted into a circle. The Shimekazari shows to the Toshigami Sama that this household is ready to welcome the god, and has a place for the god in their household.

7. Prepare and eat the Toshikoshi Soba.

Toshikoshi (年越し) means to see the old year out. Toshikoshi Soba (年越しそば) is soba eaten at 12/31. From the element of soba being easy to cut off to pieces while preparing it, eating Toshikoshi Soba is considered to wash all the bad luck of the current year. There is no rule for what you have for toppings. New Year's Eve have count down programs. Famous one would be the Kouhaku Uta Gassen (紅白歌合戦) on NHK. NHK is the national television broadcasting station. It's a music program where musicians are split into two teams; red for female, and white for male. Each musician plays their song, then have occasional interventions and flashbacks of the year. At the end of the program, they collect polls from the judges and from the viewers. Whoever wins gets the flag of the year, and right before the end, all of the contestants sing "Hotaru no Hikari" (蛍の光).

Jyoya (除夜) means 12/31. Kane (鐘) means bell. Jyoya no Kane is a Buddhist event done around midnight of 12/31. The bell is rung 108 times by a Buddhist priest or by visitors to the temple.

10. Say the New Years greetings to your fellow human beings. The words will go like this; "Akemashite Omedetou Gozaimasu, Kotoshimo Yoroshiku Onegaishimasu" (あけましておめでとうございます、今年もよろしくお願いします). This could be said face to face, via phone or text. Most of the times the network will be busted at 0:00 by the phone calls and texts though.

This custom is called a Hatsumoude (初詣). By going to a temple or shrine, it is a way to wish your good luck and prosperity to the gods. Hatsumoude is usually infested with the number of unbelievable people. Prepare to be warm if you plan on going on one. Some trains run past 0:00 for Hatsumoude visitors. Otoshidama are money gifts given to children and sometimes adults. Kids become increasingly rich, considering the number of their relatives and elders. The little envelopes with Otoshidama inside are called Pochi Bukuro (ポチ袋). Department stores and malls have New Year bargain sales. They also sell Fuku Bukuro (福袋), which are bags with a fixed price, like 5,000 yen and 10,000 yen. Some stores inform the customers what's inside, some do not. It is customary that you purchase more items than the price and is a good deal. Needless to say, it gets extremely crowded. The image above is the New Year's sale at 109 Shibuya. It is said you should eat Osechi for the first 3 days of the New Years. Since the Osechi's flavoring is salty and sweet, some people get bored of it and eat other foods instead.

15. Relax. Take your time off. Sleep all you want. Since most companies take the day off during 1/1 and 1/3, most people relax to the max. There's even a word for it: Neshougtsu (寝正月). It means to spend the New Year's sleeping.