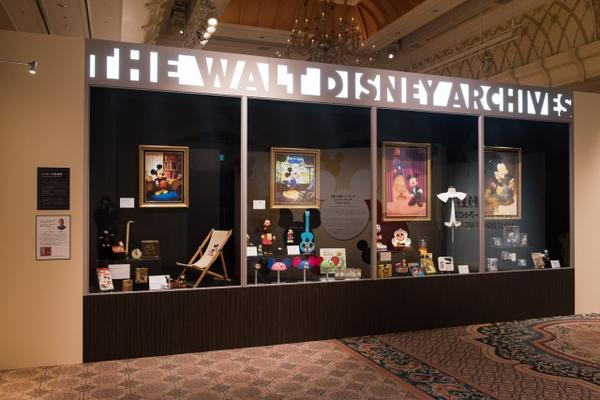 The Walt Disney Archives Travelling Exhibition Opened in Japan for the First Time!

A Disney exhibition titled "Inside the Walt Disney Archives - From Mickey Mouse to Forever After" took place in Matsuya Ginza from August 1 (Wed) - August 20 (Mon), 2018. It showcased costumes that were used in the making of their movies and valuable documents, and also sold limited-edition memorabilia. Visitors to this special exhibition were able to discover Disney in a completely different way!

All About the Walt Disney Archives!

The American Walt Disney Archives collects and preserves various materials relating to Walt Disney and The Walt Disney Company. It’s essentially a treasure trove of dreams and imagination, filled with documents related to the works created by the visionary minds of those at Disney. However, as it is not open to the public, people rarely get the chance to see their collection.

For this exhibition, around 420 prized items were chosen to be showcased. Some of the exhibits had not been on public display in Japan before. There were also documents pertaining to the deep relationship between Disney and Japan, with stories told of the key people who played a part.

What’s more, there was a photo corner where visitors could take pictures of some of the priceless collection! They were allowed to take photos to remember the experience, as well as share them on social media. Overall, getting to step into the world of Disney and its creations was a magical experience for many visitors.

Highlights of the Exhibition

At the entrance to the exhibition, there was a replica of the gigantic display found in the lobby of the Walt Disney Archives in the U.S.A. This was a special exhibit commemorating the 90th anniversary of Mickey Mouse’s first screen appearance.

This is a portrait of Mickey Mouse, drawn in 1953.

Immerse Yourself in Disney's History!

In the Research Room, one could look back on Disney's glorious past. This was a recreation of the research room that current creators of Disney still visit for ideas and inspiration. Items from throughout the history of The Walt Disney Company were on display. There was a lot to see, such as documents that you could touch, desks used by animators, and even original drawings. The room contained a lot of trivia related to Disney works, told surreptitiously by the Archives staff!

Costumes and Artifacts Known to All Disney Fans

They exhibited the costumes from last year's blockbuster, Beauty and the Beast, that were worn by the actors in the ballroom dance scene. There were also models of various characters, including Lumiere, Cogsworth, and Mrs. Potts, on display. The animated expressions of the models made them look like they were about to come to life at any moment!

Costumes and small accessories that Johnny Depp wore in Alice Through the Looking Glass and Pirates of the Caribbean: Salazar's Revenge @Disney

They also had some small accessories and distinctive costumes used by Johnny Depp in Alice Through the Looking Glass and Pirates of the Caribbean: Salazar's Revenge.

The three famous hitchhiking ghosts from the Haunted Mansion @Disney

3 original ghosts from Walt Disney World Resort’s Haunted Mansion in Florida also made an appearance at the exhibition.

Walt Disney's Office Recreated Down to the Finest Detail

The office that Walt Disney used, recreated down to the finest detail @Disney

This was a recreation of Walt Disney’s office, as seen in great detail in the movie, Saving Mr. Banks. It was an exceptional space where Walt Disney greeted important guests from around the world, and where a number of fantastic ideas were born. The presense of Walt Disney could really be felt in this extraordinary exhibit.

Memorabilia at the Exhibition

There was a variety of merchandise up for sale, from limited-edition items to fashion and interior goods, stationery, and more. There were also brand new items that made their debut in the Tokyo venue.

Stuffed toys are classic Disney merchandise! Pictured above, from the left, are Plane Crazy, Vintage Style, Fantasia, Fun and Fancy Free, and Modern Style (1,620 yen each). The porcelain Happiness Figure (950 yen) comes in pearl white, a limited-edition color for the exhibition.

These three mugs with illustrations from picture books (1,296 yen each) have Mickey Mouse, Donald Duck, and Pluto written in Japanese writing. They made great souvenirs! The key chain (1,080 yen) and the tote bag (1,944 yen) were exclusive items to this exhibit.

Various merchandise were made in collaboration with skilled creators. Some were based on traditional Japanese crafts, while others were crafts made by popular content creators. From the left, pictured above is traditional Japanese paper with a foil Mickey Mouse design (540 yen), a light necklace in 5 colors (8,100 yen each), and a Kento Hashiguchi shopping bag (small, 23,220 yen).

They also sold DVDs and MovieNEX of old and new Disney movies, as well as other related merchandise.