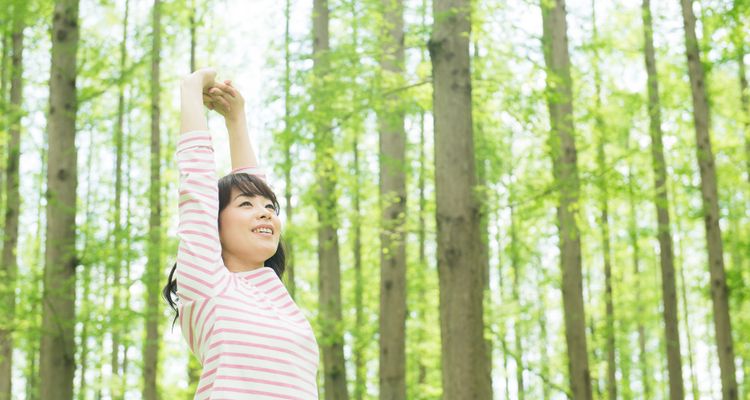 Unwinding in the Woods: What Is Japanese Forest Bathing?

Time spent in nature is inherently time well spent. Whether it's strolling through a forest, or resting your eyes along a babbling brook, being immersed in the great outdoors is not only relaxing but, for many, cathartic. In Japan, unwinding and healing amongst nature is often referred to as “forest bathing,” and in recent years, has been on the up as a health and wellness trend. But what is forest bathing, and how do you do it properly? And where is the best place in Japan to give it a try? This article will dive into the depths of Japanese forest bathing and all it has to offer!

What Is Forest Bathing?

Since ancient times, the Japanese have held the belief that nature possesses great power and divinity, and that rivers, mountains, and lakes are all deities in their own right. Nature worship is a central component of faiths such as Shintoism, Buddhism, and Shugendo, and for even those who are not particularly pious, it is still a big part of Japanese life.

Despite Japan’s cultural ties to nature, the term “forest bathing” (“shinrin yoku” in Japanese) was actually popularized as recently as the 1980s by the Japanese Ministry of Agriculture, Forestry, and Fisheries in order to promote the value of spending time in nature. While Tokyo, one of the largest metropolises in the world, bursts with fun and excitement amidst its flashy neon and sprawling alleyways, living in such a concrete jungle for too long can be suffocating, and the benefits to mental and physical well-being that come from escaping the city in favor of nature are virtually undisputed.

Forest bathing simply entails one thing: spending time in nature. Taking a stroll, meditating, or simply existing in the great outdoors all count as forest bathing. As long as you are outside and immersed in nature, there’s no wrong way to enjoy the art of forest bathing.

How to Do Forest Bathing

Although the name may sound like it implies venturing deep into the woods, forest bathing can actually be done anywhere you like. Public parks, local trails, riversides, and even your own backyard can all make for great forest bathing. Of course, urban, easy-to-access spots like these are also popular, so your experience may be hampered by outside noise. For those pursuing total solitude, a national park, mountain, or isolated beach are a better bet.

After arriving at your destination, it's important to ground yourself. Turn off electronics, close your eyes, breathe in, and absorb the essence of your surroundings. Exist not as how you came to be, nor as a collection of worries about the future, but only as you are in the moment. When forest bathing, your past and future do not define you, and thoughts and concerns from outside will only dampen your experience. Making a conscious moment-by-moment effort to live in the present and to be aware of your thoughts, movements, and sensations is the key to forest bathing.

After finding yourself, it's time to discover your surroundings. Observe how the grass and trees interact with the wind. Watch closely as the river flows and the birds skip from branch to branch. How when one leaf falls, it ever so gingerly flutters down before finding its final resting spot.

Once you’ve taken in what’s around you, set out and explore. Let your natural sense of wonder take command and don’t be afraid to lose yourself. Soon, you’ll start to feel yourself becoming one with nature, while your head grows lighter and your body bristles with energy. The effects of forest bathing are powerful, and it shouldn’t take long before you are fully refreshed and ready to return to the modern world.

The Myriad Benefits of Forest Bathing

There are many benefits to forest bathing, both physical and mental. Studies have shown that when immersed in nature, people have lower blood pressure, lower stress levels, and a much more clear-sighted state of mind. In addition, forest bathing is said to improve creativity and refresh your point of view, so after finishing, you can return to regular life with a honed focus and new outlook, helping you tackle all those stresses that led you into the forest in the first place.

The Best Places to Go Forest Bathing in Japan

When it comes to nature, Japan has no shortage of beautiful settings to whisk you away from reality and into an idyllic world of solace and relaxation. While there is no wrong place to do forest bathing (as long as there is some form of nature, no matter how urban), there is a definite list of famous Japanese parks, forests, mountains, coasts, and more renowned for their healing abilities. To help you find a starting point for your mindfulness journey, we’ve selected five of the best forest bathing spots in Japan!

Part of the southern prefecture of Kagoshima, Yakushima Island is best known as the inspiration for the spiritual forests featured in Studio Ghibli’s masterpiece Princess Mononoke (1997). It was designated as one of Japan’s first ever UNESCO World Natural Heritage Sites in 1993 for its precious, scenic, and rich wilderness, and is famed as the ultimate destination for an extended forest bathing holiday.

Yakushima Island can be accessed by either plane or ferry, and there are many hikes all over the island, including several that lead to the Jomon Sugi, the oldest tree on the island thought to be somewhere between 2,000 and 7,200 years old.

Mt. Takao is an easy day-trip from central Tokyo, one which many urbanites frequent to escape the confines of city life. Part of the Meiji no Mori Takao Quasi-National Park, Mt. Takao hosts a number of spiritual spots and temples embedded along the mountainside, and at the foot of one of the main trails is a hot spring bath to clean up and relax after hiking. Many pious ascetics also visit Mt. Takao to do waterfall meditation as a spiritual practice.

Mt. Takao is most popular during the autumn season, when the dense foliage is aflame, along with the cherry blossoms of spring, which bloom later than those in central Tokyo. Its convenient location often draws in big crowds, and those desiring escape from human contact are advised to aim for weekdays over weekends, and to opt for one of the mountain’s lesser-known trails.

Genso no Mori, or the “Phantom Forest,” is a gem nestled deep in the mountain passes of Tozawa, Yamagata Prefecture. This primeval forest is between 1,200 - 1,500 years old, and boasts a mix of both broad-leaved and coniferous trees, including a luxuriant growth of natural cedar stretching across a 75 hectare plot.

Due to the extremely heavy snowfall of winter, the ancient cedars of Genso no Mori have taken on an unusual, mangled appearance that is eerie and mysterious in nature, with many having regrown out of fallen trunks. In addition, unlike many other natural cedar forests in Japan, Genso no Mori has relatively low rainfall, but instead receives a dose of humidity from the melting snow, giving birth to abundant greenery and an out-of-this-world landscape.

The Genso no Mori walking track is only open between June and November, and is inaccessible during winter.

Towada-Hachimantai National Park is a culmination of some of the best that Tohoku has to offer. Virgin forests, pristine mountains, and serene lakes are just some of the main draws, and the views speak for themselves. The pristine stream of Oirase Gorge is an utter treat for the senses, while the gorgeous Lake Towada boasts a multitude of scenic lookouts including the Shimeitei Observation Deck, a haven amongst passionate forest bathers seeking solitude.

Rustic hot springs and a vast network of hiking trails make this trip to the northern tip of Tohoku all the more worthwhile, and even in winter, one can experience snowshoeing and ski trekking in addition to exhilarating sports like skiing and snowboarding. Plus, the park’s dense forest of Maries' fir transforms into one of the world’s largest fields of frost-covered trees, weaving together surreal, otherworldly terrain sure to put you in a reflective mood.

For those short on time, Todoroki Ravine Park is a rare slice of tranquility just a stone's throw away from central Tokyo. After disembarking from Todoroki Station, descend down into the nearby valley and follow the path adjacent to the sleepy stream. Lined by radiant foliage and home to an impressive array of seasonal birds, you’ll soon forget you’re in the middle of the world’s largest metropolis.

Highlights at Todoroki Ravine Park include the stunning vermillion-colored Golf-bashi Bridge, the solemn Todoroki Fudoson Temple, the elegant Japanese garden with a bamboo grove and “shoin” audience hall, and the grassy lawn offering ample space to lay down and stretch out. Plus, the area also hosts a collection of ancient “kofun” tumulus tombs constructed around the 7-8th centuries, making it a hit with history-buffs!

In an overcomplicated world of hustling, bustling, and being brought down by the burden of everyday life, forest bathing brings much-needed solace and helps one return to their roots. While we may not all live as harmoniously with nature as we once did, making time for mindful activities like forest bathing reminds us to focus on the now, let go of tensions, and to exist only as we are. Whether you’re traveling to Japan, or seeking to embrace Japanese customs at home, forest bathing is an easy yet deeply rewarding practice sure to add myriad benefits to your life.