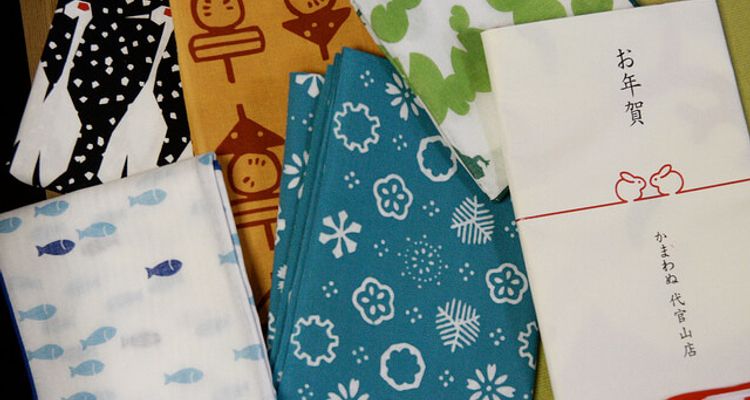 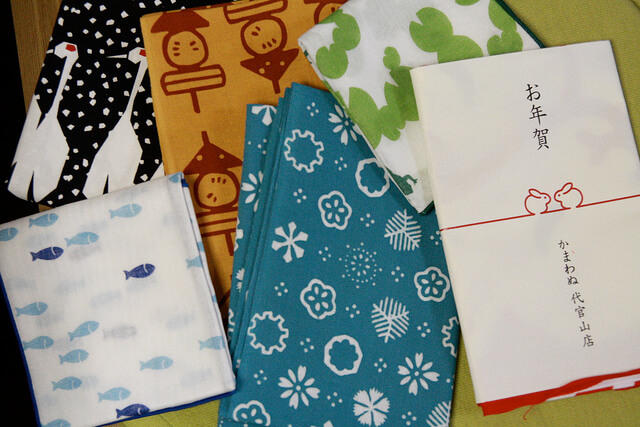 Tenugui, a traditional Japanese cloth, is more than just a rectangular towel. It carries a long history and makes a wonderful gift for any occasion.

Tenugui, one of Japan's traditional cloth has been used for centuries. It is said that tenugui was first created during the Nara period. Even with its long history, it is still commonly used today as a face or a hand towel.

The tenugui in the Nara period, is decorated with Shinto and Buddhist deities and images and used for cleaning. As we progress into the Heian period, textile became a precious commodity that only the upper class could own. Due to that, tenugui was no longer used for cleaning but as an important element in religious ceremonies, as clothing accessories during those rituals.

An Example of  a Nara Period Tenugui An Example of a Heian Period Tenugui

As we enter into the Edo period, we see more and more cotton trees being cultivated and the use of cotton began to spread. It is during this time that the cloth is being called Tenugui and can be found commonly in all households.

The cloth is now no longer only used for practical reasons but for aesthetic purposes. It was considered as a fashionable item and people would use it as clothing accessories that suit the seasons. Some would design their own tenuguis as a form of expression. Shows or fairs that showcase the creativity behind tenuguis started too.

Tenugui slowly crept into the Japanese classical arts like Rakugo or traditional dances. The well-loved Kabuki dancers or Sumo wrestlers would use tenuguis with their crest printed on it as name cards to be passed to business acquaintances.

Large mercantile stores would also use tenuguis with the name of the store printed on it, in their advertising efforts, as gifts to their customers. The cloth was also sent as a favour in return or as a courtesy gift when an acquaintance has fallen sick and so forth. The tenugui was no longer just treated as a hand towel.

During the Meiji period, with the influx of foreign culture, technology and knowledge into the country, towels and handkerchiefs from foreign lands became more popular among the people and the tenugui was slowly considered as something out of style. At present times, the tenugui is now back in the spotlight with more interesting Japanese designs that mashes both modern and traditional motives. Just like the people in the Edo period, tenuguis are now given as gifts and used as accessories. The tenugui has definitely surpassed time. Whenever you have a chance to visit Japan, don't lose out the opportunity to get your own tenugui.