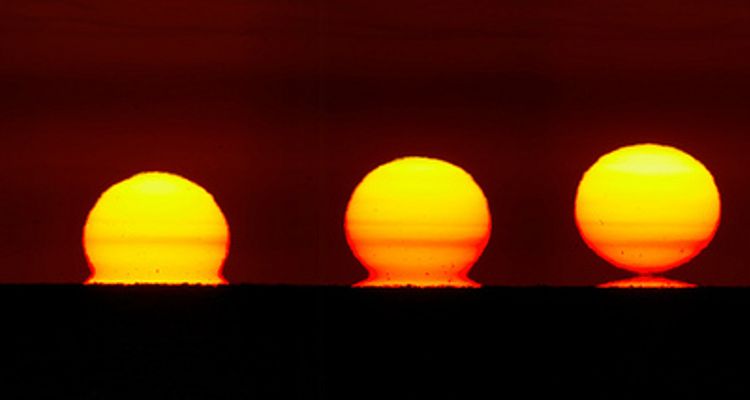 The Omega Sun in Japan: Mysterious and Lucky Winter Phenomenon

If you are staying in a coastal area in Japan sometime between late autumn and early spring, you may have a chance to see this omega-shaped sun at sunrise or sunset. It will definitely be a memorable experience.

It's getting colder, making it harder and harder to get out of bed in the morning. But an early bird catches the worm, and if you do get up and go to the seashore to see the sunrise, you might be rewarded with this gorgeous and mysterious scene... if you’re lucky.

Why does this happen?

This phenomenon is called “omega sun,” because the shape looks like the Greek letter omega (Ω). It is a mirage caused by the temperature difference in the air and the refraction of the light.

In cold season, when the seawater is much warmer than the air, the lowermost air layer is warmed up by the water and produces a temperature difference.

This omega shape is a type of inferior mirage. The refracted (inverted) image is actually below the object’s true position. When the Sun protrudes above the horizon at sunrise, its inferior mirage can sometimes be seen below it, where it joins the true Sun, creating the familiar omega shape as seen in the second and third image from the left. For this mirage to occur, a layer of very warm air must lie just above the sea surface.

Interestingly, in Japan, the phenomenon is named after this traditional doll, the daruma. The doll was modeled after an Indian monk who founded the Zen sect of Buddhism. Thus, the omega sunrise is called “daruma asahi (rising sun)” and the omega sunset, “daruma yuuhi (setting sun).”

The doll is associated with good luck and victory, so witnessing the daruma-shaped sun is also considered to bring you good luck.

This site tells you more details about the omega sun including  how the shape looks different depending on your eye height.

At the stage when the "feet" of the omega sun is small like this ... Where in Japan does it happen? But even though the temperature conditions are perfect, you cannot see it if there are clouds right above the horizon. So you need a good amount of luck to be able to take photos of this mysterious sunrise or sunset.

One such enthusiast in the southeastern part of Shikoku Island says that experienced photographers love to shoot the omega sun with some objects in front of it.

This is a particularly great shot with a man who just caught a fish while the sun was in the omega shape. Considering how shortly the shape lasts, the timing was almost like a miracle!

There are some places where you can have a second chance on the same day!

So, just one thick piece of cloud above horizon, or just the extra five minutes you spent in the restroom, could make you miss the breathtaking moment.

There's good news for you, though.

At a place where a cape juts out to the south into the Pacific Ocean like this, you could see both the omega sunrise and sunset on the same day if you stay near the tip of the cape and, again, if you're lucky. If you missed the chance in the morning, you may still have a chance to see the omega sunset on the other side of the cape.

So, good luck to all the omega-sun hunters!