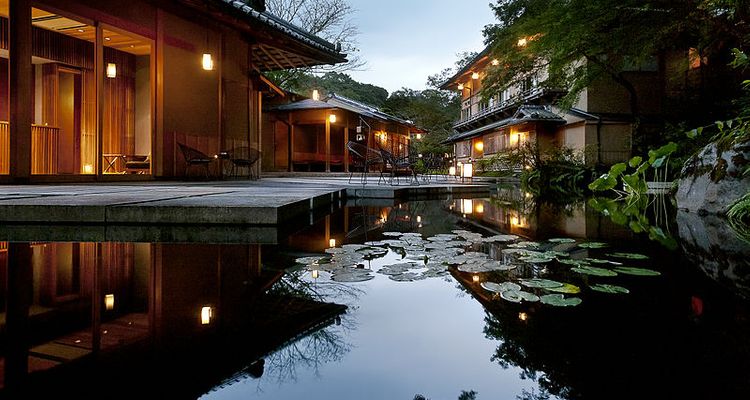 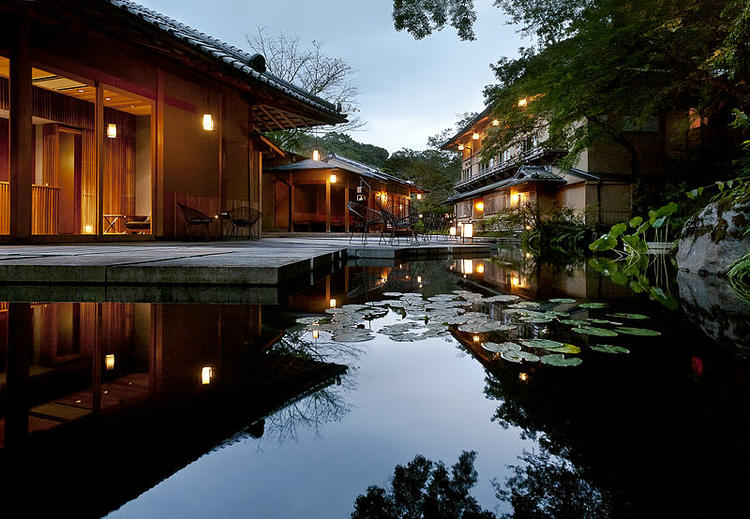 This time, we will introduce you; "The 6 Best Luxury Hotels Where You Can Have a Supreme Time in Kyoto", where everybody want to stay at least once when they visit Kyoto. Would you like to have a precious experience while staying those where you can enjoy the taste of Kyoto yet they also have a great architecture and beautiful decorations? Sumiya Ryokan (Japanese style inn) was established in the Taisho period (1912-1926) and is one of three major, long-established ryokans in Kyoto. It is also called a Tea Ceremony Inn because it has a traditional Japanese style tea room. No other ryokans serve matcha tea in the tea room in Kyoto but here. You might hesitate to make a reservation for this high class ryokan, but you don't need to worry about anything. If you face any problems, they will kindly take care of it.

When you come to this ryokan you might notice the road in front of the entrance is wet. It is a sign that tells you that they are ready to welcome the guests. It is one of the tea ceremony manners. There is not only a private bath in your room, but also a large common bath which is shared by guests. You can soak your body and have a relaxing experience. Tawaraya Ryokan was established more than 300 years ago and is also one of three major long-established ryokans in Kyoto. It is said that this is the oldest ryokan in Kyoto. It became famous for being a favorite ryokan of Steve Jobs. Its hospitality, rooms and food are all first class which attracts everybody. A house brand soap which is made with 20 different herbs is popular and you can only buy it here. Hoshinoya Kyoto is surrounded by the nature of Arashiyama, and is one of the most luxurious inns in the Hoshinoya group. All of the rooms have a river view which made this ryokan a true resort despite being in the city. This a hundred year old ryokan building has 25 rooms, and you can relax in this non-ordinary and luxurious atmosphere. Hiiragiya got stars in the Michelin Guide two years in a row. It is also one of three major long-established ryokans in Kyoto. It has two hundred years of history since it was established. It has added more charm since the annex building was built in 2006. You can enjoy a most luxurious time while staying in the annex and its new 7 rooms. This ryokan is admired by not only travelers but also locals.

Ryugin is located in one of the most tasteful areas in Kyoto which has stone walls and stone paved roads. They made this ryokan with this concept: "a small but high quality inn". It only has two suites. They are called "Yuse" and "Bousen". This ryokan has a concierge which is rare thing for Japanese type inn, but you can ask to arrange your travel freely. A three-story brick-made western style building which called Chouraku-kan was built as a guesthouse in the Meiji period (1868-1912). It is said this building was named after a word written in a frame by Ito Hirobumi, who was the first, fifth, seventh and tenth prime minister of Japan, when he was impressed by the view from the window. You can see a lot of different designs in this building, like neoclassical and Art Nouveau. This makes this inn very elegant and exotic. There is also a cafe where you can enjoy live piano music. You can have a different kind of luxury experience here that you cannot have when you stay in other Japanese inns.