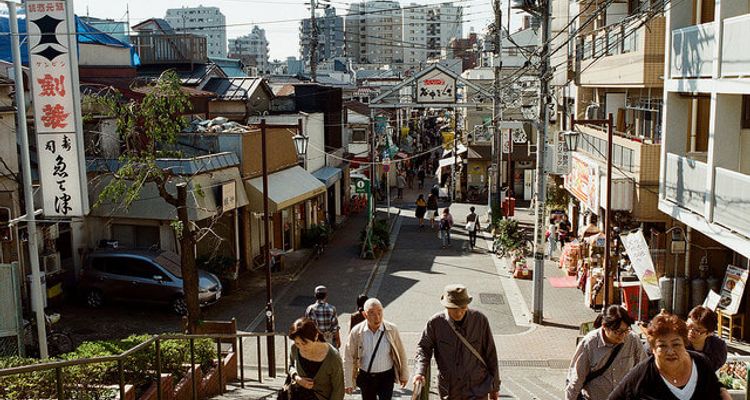 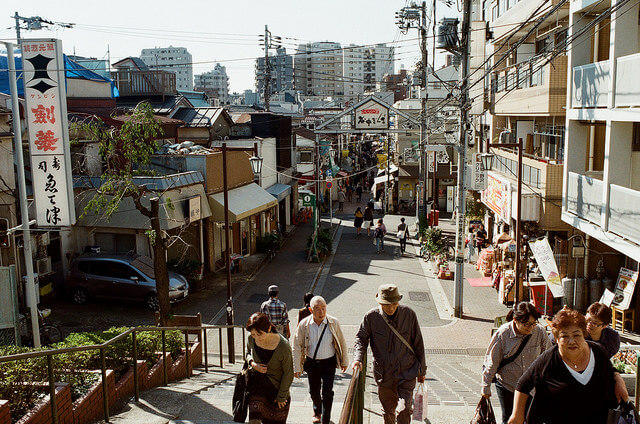 Shotengai are traditional shopping streets and in the capitol of Tokyo, they are also can't miss travel destinations. You'll be able to enjoy not just sightseeing but also shop for rare items. From lively shopping arcades, to quiet avenues, there are many different varieties of shotengai in the city. Here are some of best ones to visit. Known to locals simple as "Ameyoko," this shotengai runs between JR Ueno and Okachimachi stations. It is visited by many international tourists and during the New Year's holidays, it is so popular that limits are placed on the number of entrants. The railways underpass is divided into two avenues, Ameyoko and Uechu. Here you will find sports equipment, makeup, fruit, seafood, and a host of other goods at cut rate prices. Ameyoko as seen from Okachimachi Station. The first thing that hits your eye is the Uniqlo outlet. There are many chain stores on the avenue, so you can get some real shopping done in addition to the cultural experience. This shotengai has a wonderful old-fashioned atmosphere that has made it a common setting for movies and TV dramas, as well as a popular tourist spot. Walk five minutes from Nippori Station and you'll reach "Yuyake Dandan" (Sunset Stairway), a slope of steps that offers a great view of the sunset. Descend the stairs and you'll reach the shotengai. At 170 meters, it's a fairly short avenue but is packed with approximately 70 different stores. This shotengai is also famous for the many cats that can be found walking the area. They are a very cute and comforting sight. Known as "Harajuku for the elderly," this shotengai is frequently visited by seniors, giving it a comfortably leisurely pace. With many of the shops carrying daily necessities, the avenue fulfills its mission as a center of trade, but it is also home to two temples and is visited frequently by worshipers. In particular, Koganji Temple is famous as the site of a Togenuki Jizo Buddha statue. Though the actual statue is a sacred object and unavailable for viewing, the temple hands out painted depictions of the artifact on washi paper and they are said to have healing powers when placed on parts of the body with aches and pains. There is also a washable Kannon statue, where visitors can pour water for similar healing benefits. This shotengai is approx. 700 meters long with over 240 stores and a roofed arcade to protect it from the rain. The roof is designed to resemble an Akoya Pearl Oyster. Every year in August, the street plays host to the 7-day Tanabata Matsuri (Star Festival). It's said to be one of the three biggest tanabata festivals in Japan and is seen yearly by over 500 thousand visitors.

Running parallel to the Pearl Center is Nakasugi-doori, a road that leads from Asagaya Station to Minami Asagaya and is famous for its many zelkova trees. If you grow tired of shopping, head there to be refreshed by the beautiful natural greenery. The first covered arcade shopping street in Japan, this shotengai is known as "The Arcade of the East." It was 480 meters long when first opened but has since grown to a total of 800 meters. Since the street was expanded mid-life, the arcade covering ends half-way through, but the stores continue on and on. The shotengai has received a lot of media coverage over the years, particularly surrounding the store Ousama to Strawberry ("The King and Strawberries"). The store's 60 cm tall King Parfait is famously large and impossible to eat alone. Make sure you take the challenge with a friend. Joyful Minowa is a shotengai with a retro atmosphere that feels like time has stopped. It is located just outside of Minogawa Station and accessed by turning left down a thin alleyway that opens into a bright, spacious shopping street. A covered shopping arcade is always a blessing when it rains. In addition, the old-fashioned atmosphere and low prices will make you feel as if you've gone back in time. To get to the shotengai, you'll need to take a ride on Tokyo's last remaining street car. Riding on this gentle train in the middle of a bustling city like Tokyo is an experience in and of itself.

This shotengai was once known as Koenji Ginza Shotengai, but after being used as the setting for a Naoki Prize-winning novel entitled "Koenji Junjo Shotengai," the name was changed to match the novel.

Upon exiting the station, you'll see a large arch, around which stand as many as 250 stores. Every year, on August 26, 27 and 28, the shotengai is host to the famous Tokyo Awa Odori dance festival. The Awa Odori began in Tokushima but has since spread across Japan. Anyone is welcome to join and it's a great way to experience traditional Japanese culture. Fittingly named, the 224 meter Nakano Sun Mall is marked by a large and cute sign depicting the sun on its ceiling. There are approximately 110 stores inside. If you proceed down the shotengai, you'll eventually reach the Nakano Broadway shopping mall. With four floors and an underground promenade, the mall is full of shops dedicated to subculture and is well loved by otaku. Second only to Akihabara, Nakano is one of Tokyo's best spots for subculture. Many performers and television personalities also live nearby, so you never know who you might meet.

The largest of its kind in Japan, this street of cooking utensils is also called the "Kappabashi Doguyasuji." Visit here to find 170 shops selling tools for cooking and food preparation. Food samples are available as well. You'll know you're in the right place when you see the building with a large drawing of a cook on top. You'll find many thin shopping alleys branching off from the main avenue. Particularly popular are the shops selling Japanese knives. They are very high quality and a frequent purchase for international visitors as well. You might also find other varieties of tools you've never encountered before. Fitting for a street with the word "kappa" in its name, you'll see many art objects depicting the mythological Japanese creature, the kappa, along the road. How many can you find? This 1.3 km shopping street is said to be the longest in the Kanto area. The name is taken from its likeness to Japan's high class Ginza Area.

The shotengai is divided into three zones, with the area around Togoshi Station being the center. The northern end of the street is called the "Shoeikai zone" and the southern end is known as the "Ginroku-kai zone." Each area is divided by colored flags, with the center being blue, Shoei green, and the Ginroku-kai yellow.

This is one area of Tokyo where you don't have to think twice about eating while walking. The surrounding stores carry an abundance of finger-foods like croquettes, dango dumplings, oden, and shaved ice.

Shotengai are a great place to take a stroll, enjoy a meal while walking and stop by whatever shops happen to catch your eye. You can dig for hidden treasure or enjoy yourself in countless other ways. They are also popular with locals, in addition to tourists, and a great way to experience everyday life in Tokyo.