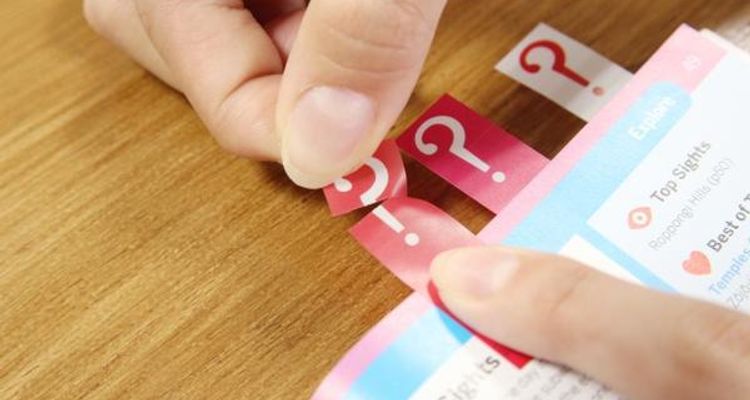 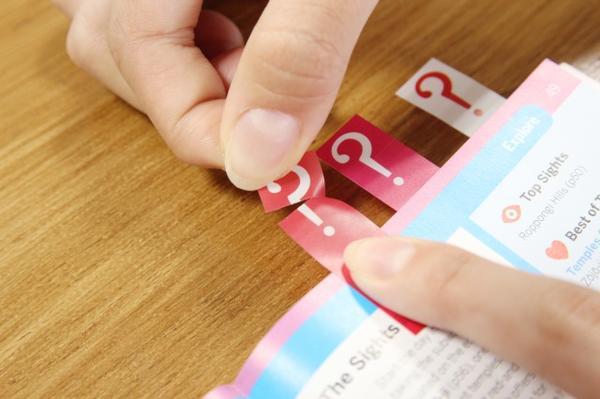 The ever-popular, Japanese stationery. Of course, you can get them for personal use, but they’re also extremely popular as souvenirs! Tsunagu Japan’s editorial department has carefully selected some of the newest and most useful Japanese stationery for you. Before you realize it, you’ll find yourself wanting to use and recommend them to all of your friends!

The evolution of labels! Just Piri-it and you can solve any problem!

This is an item from one of Japan’s exemplary stationery makers, Sun-Star Stationery, which was established in 1952. By adding perforated holes to labels, the meaning of the label changes before and after you tear it off, making it quite a revolutionary product!

Take, for example, this “LOOK!” label. You can stick a “LOOK!” label onto any pages you’d like to check later, any passages you don’t understand, etc.

When you've finished checking it, just tear off the perforated section and...

"LOOK!" becomes "OK!" What's more, the label is transparent this time, so you don't have to worry about not being able to see the words underneath.

Which parts have been checked and which parts haven't become very obvious, so it's highly recommended for when you’re revising for tests! It’s also extremely useful for materials that have to be passed within companies.

This is the "?" series. Stick this label onto any page that you don't understand, and then...

When you understand it, tear off the perforated section and...

It's incredibly handy when studying for tests, since you’ll have a method of locating and checking any confusing parts. Also, tearing off the perforated sections when you realize, "I understand!" is really satisfying. You just might become addicted to it!

There’s a wide variety of these labels available, such as “Piri-it! III Shippo Neko” – which is a cat tail that becomes “OK” when you tear it off, and “Piri-it! Moyamoya Penguin” – which is a penguin with a gloomy face that becomes refreshed and wide awake after you tear it off. There’s even “DC Toy Story”, which has popular Toy Story characters that children love. Get out there and find your favorite!

Even better, since it’s not bulky, it’s perfect as a souvenir!

This makes cutting out difficult pieces as easy as pie! Even curved lines come out just the way you want!

This handy paper cutter is not from a stationery maker, but from HARAC (Hasegawa Corporation) – a cutlery-making company that was established in 1933! The first amazing feature is that it’s a rotating cutter. It’s constructed so that when you push the button, the blade extends. You can use it similar to the way that you’d use a computer mouse to cut anything from square shapes and round shapes, to even freehand shapes!

Of course, a cutter is a cutter, so be sure to have a cutting mat prepared beforehand.

Now then, let’s try cutting out something interesting from a magazine!

First, place the blade portion on whatever you need to cut, and then push the button.

After that, all you have to do is keep pushing the button and follow along the design that you want to cut out. The blade rotates by itself, so you don’t have to keep changing the angle of your hand, which makes the work a lot easier!

Just like that, cutting out a complicated design has become so much easier!

Now you can make whatever you imagine – cuttings of thin photographs, original greeting cards, picture books, paper art, and so much more!

What’s more, you’ll be glad to know that the tip of the blade has a safety feature*.

*There may be rare cases where you can be cut by intentionally rubbing the blade repeatedly.

"Unbreakable" is the catchphrase for this best-selling mechanical pencil!

When mechanical pencils came into use, there were many people who were bothered by the fact that the leads would break so often. In response to that gripe, the long-established stationery maker, ZEBRA (established in 1897), made this mechanical pencil. It looks like a normal mechanical pencil, but even if you put a lot of pressure on it, the lead won’t break!

Although it looks quite ordinary, it’s an incredibly high-tech mechanical pencil. When you apply strong pressure diagonally, a metal portion extends and wraps around the lead, protecting it.

No matter how hard you write, the lead will not break.

We actually tested it until our fingers began to hurt, but it still did not break. What’s also surprising is that you can use lead from any brand.

It will make a great souvenir for yourself or for any student preparing for exams!

You only need one of these to open up any pesky cardboard boxes!

This product was developed by a well-established Japanese stationery company, KOKUYO.

In recent years, the increase of home deliveries has also lead to an increase in the number of cardboard boxes that need to be opened. These scissors will save your behind during such times!

You can cut off the band by using it like a regular pair of scissors.

It can also cut packing tape and other sticky materials without getting too sticky from them!

With this item, you can slide the switch, grip the handle, and a cutter will extend from the pointed end. How convenient! Also, the blade can only extend a maximum of 1mm, so you don’t have to worry about accidentally cutting whatever’s inside. When you actually cut with it, you’ll be amazed by how simple and convenient it is!

You can also use it for cutting out those hard-to-peel-off stickers, as well as the packing. There’s tons of ways to use this!

It’s especially recommended for anyone who has to open many mail-order packages.

One way or another, a pair of scissors is something that gets a lot of use. However, it’s bulky when you put it in a pencil case, and what’s more, the small scissors that can fit into a pencil case are not really practical...

If that’s the case, then pen-type scissors are recommended for you! This particular item is practical without being bulky, and also has the right safety features!

The way to use it is simple. When you slide the black slider at the center, it transforms into a pair of scissors! Also, it doesn’t matter if you’re left-handed or right-handed – anyone can use it!

At a glance, the thin wire might not seem very safe. But once you use it, the wire forms to your finger, making it oh-so-easy to use.

When you’re not using it, all you need to do is slide the slider back to its original position and cover it with the cap. In addition to pencil cases, the safe design makes it easy to keep in coat pockets.

It’s a handy item that you can always keep in your pencil case!

There are still many more interesting and useful stationery goods in Japan that we could not introduce this time around. Shop around and find your favorite!