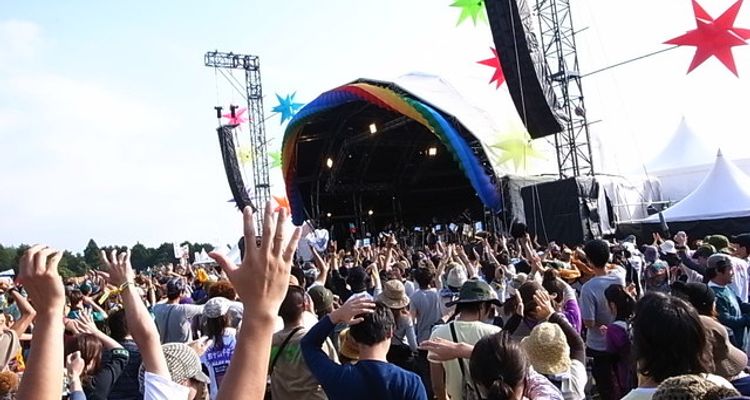 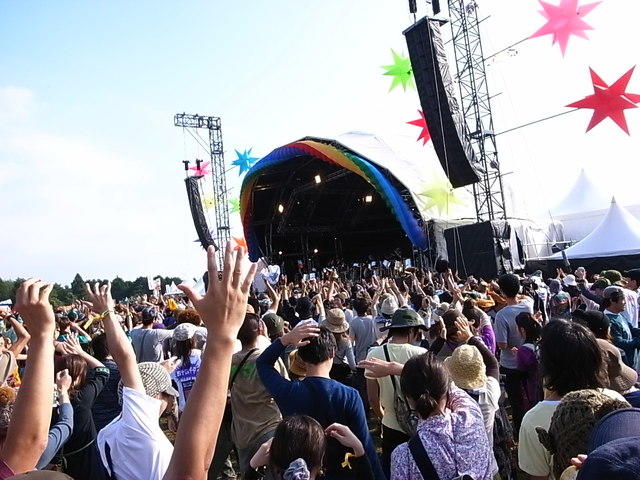 Summer is the Season of Outdoor Music Festivals! A Guide to Kyoto Daisakusen 2017

[Local University Students Tell All!] For Japanese young people, the summer means outdoor music festivals. The largest music festival in Kyoto is the Kyoto Daisakusen. You'll learn about all the ways you can prepare in advance, services at your disposal, and recommendations from university students for local shops, restaurants, and strategies to get the most out of the event. All the information you need is right here!

What is Kyoto Daisakusen?

The festival is held every year for two days in August, but this year it is scheduled for three days to celebrate the event's 10th anniversary. Musical acts ranging from popular young bands to veterans of the Japanese scene will appear, including well known names like Maximum the Hormone and Dragon Ash. The band RADWIMPS, known for providing the soundtrack to the anime "Your Name.," will also perform. All in all, it's a must-see for fans of J-ROCK.

※The photo is a simulated image

Here are three tips that will help you prepare in advance for Kyoto Daisakusen.

As the event nears, scores of people from around Japan and abroad will flood the Kyoto area. The competition for rooms near the stadium is fierce so make sure to reserve your space as early as possible.

If you're looking for a hidden spot where it is comparatively easier to find a room, try looking in the neighborhood of Keihan Fushimi-Inari Station. It offers access to the stadium that is just as convenient as the closer Keihan Uji Station and can also be reached from the city. In addition, there are several guest houses in the area. If you're going to attend all days of the festival, a room there is definitely worth a look.

Another recommendation, though a little further out, is Sanjo Station. It's in a neighborhood that is famous for lodgings, restaurants, and tourist attractions, so you have the option of doing some sightseeing when you've had enough music.

The venue for the festival is very big, so the last thing you want is to be lugging around heavy bags all day. There are places inside the stadium where you can check your bags, but it's still best to make your way to the stadium as light handed as possible. It's time like these that the coin lockers at train stations come in really handy. Check your bag as you depart the train and take with you only what you need.

Kyoto Station alone has over 3,700 coin lockers on its premises and you should leave your large bags there when you do sightseeing in the area. Of course, you can also use the coin lockers at the train stations near the stadium on the day of the festival as well.

Though you shouldn't bring heavy bags with you, here are some light items you should bring. Below are ten accessories that can really come in handy.

You can find them at the Don Quijote discount store inside the Kyoto Avanti shopping mall near Kyoto Station's Hachijo Exit. They can also be found at convenient stores near your closest station.

① A Change of Clothes

You're bound to deal with a lot of sweat at an outdoor music festival, so make sure you bring extra t-shirts and towels.

② A Thermos with Fluids

To avoid dehydration, make sure you bring plenty of fluids. You should also bring something salty to maintain your sodium balance.

Outdoor venues are usually home to a lot of bugs, so having insect repellent on hand is always a good idea.

Have them on hand to wipe off sweat and keep your body fresh!

Always have some sunscreen with you to deal with the summer's harsh rays.

They're great for resting on a hill and making your concert experience like a picnic.

Plastic bags from convenience stores can have all sorts of uses, so make sure to have some on hand.

To protect yourself from sudden rainfall, make sure you have a rain coat and zip lock bags to protect your phone and other devices from getting wet.

You'll need them if you get injured in a mosh pit or have symptoms of heat stroke!

Come well prepared and you'll be able to enjoy the festival to its fullest! However, there's going to be a ton of people competing for seats, so you won't be able to relax quite as much as the picture above.

Routes to the Venue

There are two routes you can take to reach the venue.

Trains are another great way to reach the venue. here are some of the JR routes that leave from JR Kyoto Station

When boarding from JR Kyoto Station, first take the Nara Line leaving in the direction of Uji Station, the closest station to the venue. A one-way trip will cost you 240 yen and you'll reach your destination in 30 minutes on a local, or 20 minutes on an express train.

Arrival at JR Uji Station. To head toward the venue, take the South Exit.

Head out the North Exit and walk northwest for ten minutes until you reach Conan's JR Uji North Location, where you'll find a wide selection of lifestyle goods. Many of the items you should bring can be found there. There are also several convenience stores near the station.

Head out the south exit of the station and you'll be met by the Uji Stop of the Keihan Bus line. From there, you can ride the bus to the Taiyogaoka Gate Mae bus stop which is right in front of the stadium entrance. The fare is 210 yen one-way.

The bus ride will last about 10 minutes. While it's not exactly too far to walk, the path is mostly uphill so it's best to take a bus.

You're arrived at the venue! All that's left now is to enjoy the music!

Things to Remember at the Event

As an event, Kyoto Daisakusen places a heavy emphasis on proper separation of garbage, recycling, reuse, and leaving the stadium in a clean condition. Drinks sold at the venue will be handed out in reusable cups and if you return your cup before going home, you'll get an original sticker as a gift. In addition, tickets to the event come in the form on an all purpose IC card that can be used for entry, checking your bags, and even function as a credit card when making purchases.

After the Festival Closes

The festival is scheduled to close each day at 8:00 PM. As the nearest station to the venue, Uji Station will be very crowded each night. Restaurants and bars near the station will also be full, so consider going for dinner at the nearby Fushimi Inari Station and Sanjo Station.

Fushimi is also home to the bath house "Chikara no Yu" (accessible from Kintetsu Takeda Station) and if you show your Kyoto Daisakusen ticket, you'll receive a discount. Take the Kintetsu train line to get there, or change trains at Keihan Tambabashi Station. It's a great place to clean up and relax after a long day outside.

Tickets are already a hot item this year, so get them while you can and consult this post again to make sure you get the most of out of your festival experience.