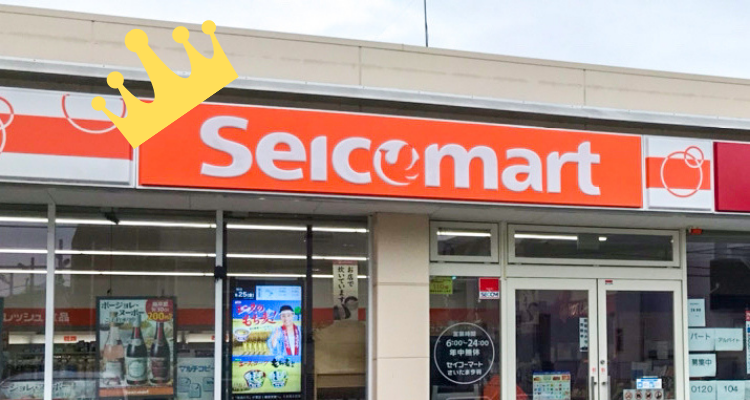 Given how often Japanese residents swing by their local convenience store, many people naturally end up with some opinions about which is better than which. Does FamilyMart offer better rice balls than Lawson? Does 7-Eleven have the best snack breads? To put these discussions to rest, a research institute conducted a survey of thousands of customers, and found out that the best convenience store chain is Seico Mart. Who? And why?

The annual Japanese Customer Satisfaction Index is a product of the Japan Productivity Center, and it is a large-scale survey of how customers feel about numerous Japanese brands across several categories, including supermarkets, hotels, mobile companies, banks, and convenience stores.

Over the survey period of July 1st to August 5th, the researchers asked some 15,000 people of all ages, genders, and locations how often they frequented a certain list of chains. Then, in Phase 2, they selected a smaller sample of people and asked them more questions about a particular chain they reported going to often.

The convenience store section of the survey featured seven chains—the Big Three chains (FamilyMart, Lawson, and 7-Eleven), plus Daily Yamazaki, New Days, Ministop, and Seico Mart—and for the fifth straight year, Seico Mart came out on top, with a Customer Satisfaction Score of 76.3, edging out second-place 7-Eleven with 72.5. Five other scores were calculated as well (Customer Expectations, Product Quality, Product Value, Likelihood to Recommend, and Loyalty), and Seico Mart finished on top for three of them as well, and second place for the other two.

What Is Seico Mart?

If you've never heard of Seico Mart, that's understandable; you wouldn't find it in most of Japan's major cities. Here's what it is and what makes it so special!

Seico Mart is a convenience store chain that is huge in Hokkaido—where it operates some 1,169 stores, more than any of the Big Three—but is almost nonexistent everywhere else. Only two other prefectures have any stores at all (Ibaraki with 82 and Saitama with 10), which explains why it lags behind the Big Three chains in familiarity. It was actually the first convenience store chain to get started in Japan, with the first store opening in 1971 (two years earlier than 7-Eleven).

It’s apparent the moment you walk in that it’s different. A large number of their products are made by their in-house Secoma brand (over 1,000 original items in total), and they boast their use of Hokkaido ingredients in large letters, particularly Hokkaido melon, dairy, and rice. This means there is a wide variety of novel snacks, ice creams, and alcoholic sours that you won’t find anywhere else. The most eye-catching examples of this are the products based on the regional specialty "jingisukan" (a lamb-based dish)—you can find jingisukan chips, jingisukan noodles, as well as frozen lamb for making the specialty at home.

There are also several innovations that other convenience store chains would do well to learn from, including an extensive hot foods section (featuring warm bentos and rice balls handmade on-site) and individual side dishes that you can mix and match. Their instant noodle selection is astonishing, and they boast a large variety of wines. You can even get giant bags of rice (from Hokkaido, of course), and their original products take care to use natural ingredients. Fans swear by their prices, which are said to be closer to supermarket prices.

There is definitely a regional-pride component to Seico Mart loyalty, certainly because it's everywhere in Hokkaido and because it carries so many local products, but it has done a lot to endear itself to residents as well. During the bitter winters, it fulfills a crucial role for rural residents by selling heating oil, and in 2018, when an earthquake in the Iburi region caused major blackouts, the chain earned widespread praise for managing to stay open and provide support for the daily lives of locals.

But If You're Not in Hokkaido...

You should definitely stop by Seico Mart if you ever travel to Hokkaido, and see for yourself why it's gotten such high praise! Even if you can't make it that far, however, there are a few stores in Saitama that are within reach for Tokyoites (links to Google Maps):

Moving back to the survey, the rest of its findings were interesting as well! Below Seico Mart (76.3 points) were:

With FamilyMart, NEWDAYS, and Daily Yamazaki lagging behind.

So! How does this verdict sound to you? Does the ranking match up with what you've experienced personally? Let us know!

You can find the full results (in Japanese) here.