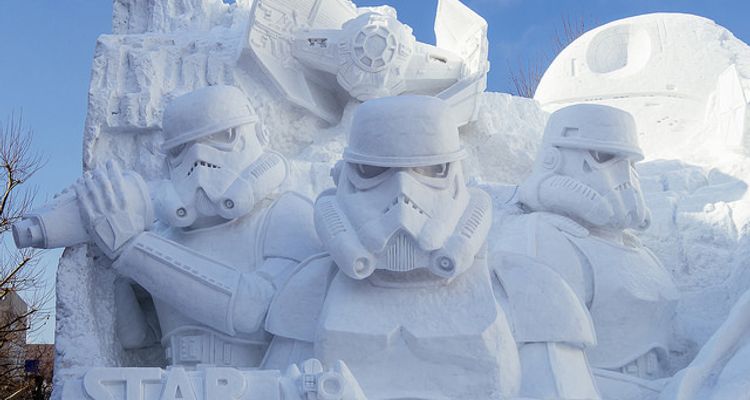 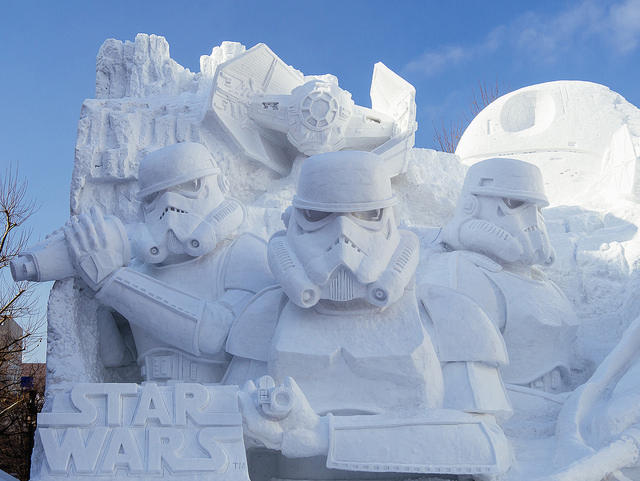 Enjoy more than 200 ice and snow sculptures at the 66th Sapporo Snow Festival. May the Force be with you.

One of the biggest winter events in Japan, the Sapporo Snow Festival attracts more than 2 million visitors every year. This seven-day event held in Hokkaido's main city, Sapporo, showcases ice and snow sculptures of various designs and sizes. This year, the 66th Sapporo Snow Festival will be held from February 5 until 11. The snow and ice sculptures are visible at Odori Park, the grounds at Tsudome, and the main street in Susukino. The sculptures are illuminated until 10pm at the Odori site and 11pm at the Susukino site. The Tsudome Site is only open to visitors from 9am until 5pm.

The main site is the Odori site in Sapporo's centrally located 1.5 kilometer long Odori Park. The festival's famous large snow sculptures, some measuring more than 25 meters wide and 15 meters high, are exhibited there. They are lit up daily until 22:00. Besides about a dozen large snow sculptures, the Odori Site exhibits more than one hundred smaller snow statues and hosts several concerts and events, many of which use the sculptures as their stage.

For Star Wars’ lovers, make sure you visit the STV Square in Odori. This snow sculpture of Star Wars that will appear at the festival is the world’s first approved by Lucas Film Ltd. & TM. Star Wars’ fans can enjoy this all white Star Wars’ characters before the release of the  movie, “Star Wars: The Force Awakens” this coming December. Also at the Odori site are large snow sculptures such as the “Alice’s Adventures in Snowland,” a sculpture based on the story of “Alice in Wonderland," as well as a snow sculpture of the Manila Cathedral, Kasuga Taisha Shrine, and others. Visitors can also enjoy themselves at the skating rink, the Shiroi Koibito Park Air Jumping Platform, and the Winter Food Park where you will find various local Hokkaido cuisines. The less centrally located Tsudome Site is a family oriented site with three types of snow slides, snow rafting, and more snow sculptures. Inside the dome, there are many food stands and a stage for events. The Tsudome Site is open daily from 9:00 to 17:00. The Susukino site, located in and named after Sapporo's largest entertainment district, exhibits about one hundred ice sculptures. Susukino is located only one subway stop south of Odori Park. The ice sculptures are lit up daily until 23:00 (until 22:00 on the festival's final day). In 1955, the Self-Defense Force joined in and made a massive snow sculpture, the kind for which the Snow Festival is now famous for. The Festival has grown from humble beginnings to become one of the biggest and most well known winter events. The Snow Festival is considered to be a festival of international-caliber. For more information about the festival, please visit www.snowfes.com.