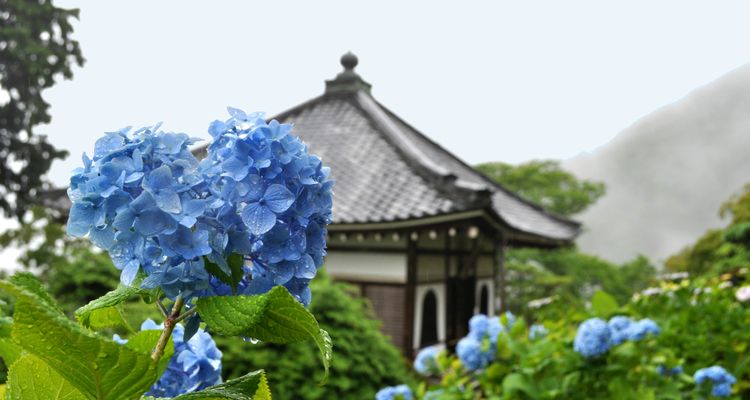 Rakusai: A Pilgrimage to the Green of Western Kyoto

Kyoto is a city built in a basin ringed with mountains, but the city limits reach quite far outside of the grid-like lines of the city center. The southwest portion of the city, known as Rakusai, includes the quiet, agricultural area of Oharano. As yet largely undiscovered by Kyoto tourists, the area is dotted with a number of lovely temples and shrines, and is accessible in an hour or less from the center of Kyoto City. Yoshimine-dera Temple is hidden here in the mist, a beautiful treat to visit in any season. Keep reading to learn more about the treasures that this area of Kyoto holds through this writer's eyes.

A Natural Bounty, Just Outside the City Center

The Rakusai area lies to the west of Kyoto’s downtown area, where I visited the mountainside overlooking the city center. Despite its proximity to Kyoto’s metropolitan areas, the Rakusai area is vibrant with natural sights. Its temples are exquisite during the autumn and cherry blossom months, and a visit during September should be highlighted by the off-season blossoming of a variety of unusual species of sunflowers.

In the Fuji-bakama Festival during late September, visitors will be treated to the sight of “pink frost” (properly known as Eupatorium fortunei) - a fragrant, flowering plant popular in Eastern medicine, but relatively rare to see in the wild. In Oharano, these frosty pink plants are often adorned with the oversized wings of chestnut tiger butterflies.

To get a little deeper into Rakusai, I’m heading past its fields of flowers and up to its hidden mountain temple, Yoshimine-dera.

Yoshimine-dera Temple is accessible by a combination of train (either 7 minutes on the JR Line from Kyoto Station to Mukomachi Station, or 20 minutes from downtown Kyoto on the Hankyu Line to Higashimuko Station) and bus. From either station you choose, we’ll be hopping on Hankyu Bus #66 for a ride of about 30 minutes.

Departing Higashimuko Station on the Hankyu Line, I pass through Kyoto’s outskirts - an area of extraordinary green in the warm months. In autumn, the rice fields between houses here will be flowing with long stalks of ripe rice grasses. In the winter, you may be treated to a snowscape if you’re lucky. I made my visit in early summer, during Japan’s rainy season. There is a light mist hanging in the gaps between the mountains, and bright shoots of new rice plants stick up from the glassy surface of the paddies that occasionally peek out through the neighborhood as my bus rolls by.

Watch your step when you get off at the last stop - you’re on the side of Kyoto’s western mountain now, and there’s a bit of a slant. Looking around, I can see nothing but forest along the roadside, and the air up here feels markedly different: fresh and cool. Across the road, there’s a little creek in a rush to get downhill, and across one section, I find a tiny bridge with bright red railings. This is the entrance to Yoshimine-dera Temple.

Before arriving at the temple’s gate and ticket booth, you’ll have to walk up several slopes, through the foliage. I promise the views you’ll see through the temple complex will make it worth your while.

Emerging from the fronds of the maple trees, Yoshimine-dera Temple’s gate is impressive on its own—a structure of dark-wood accented in white that looks particularly atmospheric shrouded in the morning mist. Pass through it, and you’ll be greeted with the temple’s grand main hall atop a flight of steps. (Though the tunnel of scarlet torii gates at Fushimi Inari Shrine in central Kyoto are famous among many Western audiences for their appearance in the 2005 movie Memoirs of a Geisha. The protagonist, Chiyo, runs through them and emerges to pray at the top of a hill. It’s a little known fact that this scene following the torii gates is actually not Fushimi Inari, but Yoshimine-dera Temple!)

The temple grounds here are vast and cover what feels like much of the hillside in a series of winding paths. Because the grounds are so lush with greenery and plant life, there’s a feeling of discovery in rounding a corner and discovering some nook, or the temple’s impressive view. On a clear day, one can look out from the mountainside over not only the tranquil Oharano area just below, but the whole city of Kyoto. Kyoto is not a city of many tall buildings, but the tip of Kyoto Tower is a striking landmark, and, if you’re lucky, you might just catch a glimpse of the glint of the sun on the bullet train as it winds away from Kyoto Station.

Yoshimine-dera Temple itself was founded over 1,000 years ago in 1029 by the Tendai Buddhist priest Gensan. Many of the original buildings themselves, however, were lost in fire and rebuilt in the 1600s. Elements of 15th century architectural styles can be seen around the temple, as in the flame or flower-petal-shaped kato-mado windows.

The temple also features several natural monuments. I stumble upon one as I step away from the panoramic view of Kyoto City. The “Gliding Dragon” is a 600 year-old pine tree that grows not vertically, but horizontally, its trunk rising and falling gracefully like the twisting body of a dragon. The tree is a rare species of Japanese white pine that grows sturdy and low. This one has a soft, thick covering of pine needles shielding its trunk.

The “Gliding Dragon” once grew to a length of 50 meters, but now stands at a (nonetheless remarkable) 37, and is a nationally-recognized Natural Monument.

Yoshimine-dera Temple is a hidden gem for its autumn foliage, when its vast grounds come ablaze with color, but its weeping cherry trees are equally stunning. One of these cherry trees stands tall and grand, nearly 300 years old, its elegantly drooping branches supported by stilts.

In early summer, during my visit, Yoshimine-dera Temple features a stunning display of some 8,000 hydrangeas. The hydrangea season tends to be a rainy period, but luckily for visitors, the combination of the mountain mist and the raindrops on the large petals is not only spectacular, but very much a part of this temple’s aesthetic.

As with much of the Rakusai area, the charm of this still mountainside lies in the coexistence of Kyoto’s deep history with its rich natural surroundings. There’s much more to explore in this southwestern region, but just a step outside the city center is worth the breath of fresh Kyoto air.

See more about the locations in this article