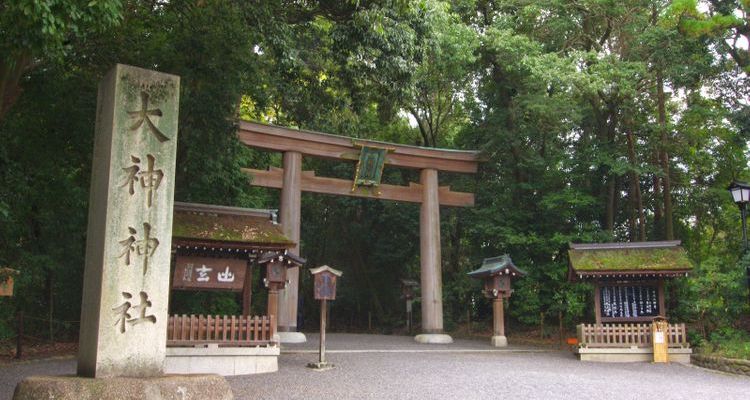 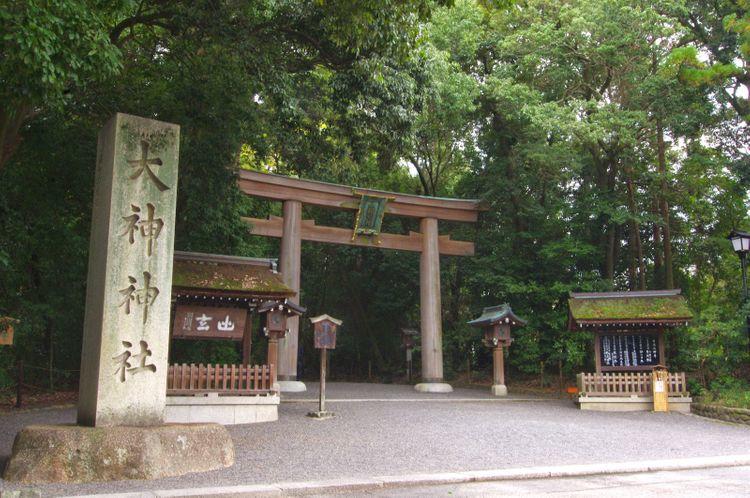 For most people, if they had to pick the most representative shrine in Nara, they would probably go for the Kasuga Taisha, the World Heritage Site guarded by deer. But this article will take you further away from Nara City and introduce you to Japan’s most ancient shrine, the Miwa-Myojin Omiwa Shrine, which was the "ichinomiya" (top shrine) for the former Yamato Province and even comparable to the Izumo-Taisha in Shimane!

Miwa Station, the station closest to the famous “power spot” Omiwa Shrine, is quiet and empty on weekdays. After walking out of the station, there will be many grandpas and grandmas selling fruits like tangerines and persimmons at stalls on the deserted streets at super-cheap prices. The prices are less than half of that in the supermarkets of Nara City, so it is recommended for tourists to buy some and keep them for later, back at the hotel.

The station faces the opposite direction to the shrine. After leaving the station, follow the banners that can be seen everywhere, or the road sign that looks like a C-shaped path, to cross the railroad, and the perfectly conical Mount Miwa will appear before your eyes. Continue forward and you will arrive at the pathway leading to Omiwa Shrine.

Once arriving at the shrine, it will suddenly be more crowded with people, especially women. It seems the power spot frenzy has not yet cooled down. Here is Japan’s most ancient shrine, the Miwa-Myojin Omiwa Shrine, which is comparable to the Izumo-Taisha in Shimane.

About Mount Miwa and Omiwa Shrine

Ever since ancient times, Mount Miwa has been worshipped by prominent local clans as a holy mountain where a deity resides. During the reign of Emperor Sujin, the court built this shrine to calm diseases. The following story is recorded in the myths written in the chronicles Kojiki and Nihon Shoki:

Okuninushi no Kami, the god of Izumo-taisha, created Japan as a country with the help of Sukunabikona no Kami. However, before the great deed was completed, Sukunahikona no Kami left by himself for Tokoyo no Kuni, a land of eternal life on the other side of the ocean. Just when Okuninushi no Kami was worrying over having lost an important assistant, a glorious god appeared on the sea of Izumo. Okuninushi no Kami asked him of his identity, and the god answered, “I am your saki-mitama (happy soul) and kushi-mitama (wondrous soul).” He requested that Okuninushi no Kami worship him at Mount Miwa in Yamato for a blessing to complete the nation-building task.

As Omononushi no Okami’s true form is a snake god, believers usually use eggs and wine to worship him at Omiwa Shrine.

Not far from the Omiwa Shrine is Hashihaka (chopstick-grave) Mound, and legends say that it is the mausoleum of Princess Momoso. The name Hashihaka comes from the horrible way she died. In the archaeological field, some claim that it is actually the tomb of Himiko, queen of the ancient Yamatai kingdom. Yet ancient tombs designated as imperial tombs are managed by the Imperial Household Agency, so it has been difficult to conduct excavations and inspections.

Hashihaka Mound is a 5-minute walk from Makimuku Station, one stop to the north of Miwa Station. Hashihaka is the most ancient key-shaped tomb, and its unique shape can still be seen despite being completely covered by green trees. In the myths, Hashihaka Mound is mysteriously recorded to be “built by people during the day, built by the gods at night."

Another extremely rare feature of Omiwa Shrine is that it has no honden (main hall). In most general shrines, there is a honden to house the deity at the back of the temple. But Mount Miwa itself has been the shintei (kami-body) of Omiwa Shrine since ancient times, replacing the main hall; this preserves the most primitive worship form of Shinto. The uniquely shaped mitsu-torii (triple torii gate) is another highlight of Omiwa Shrine, but we couldn’t find it anywhere. We learned that it was located beyond the haiden (hall of worship) and can only be seen after applying for a special worship, which was regrettable.

Although Mount Miwa is open for applications to climb Mount Miwa for worship (known as "miwayama tohai"), there are naturally numerous regulations to be observed for this holy mountain. First, you should pay attention to the restricted days of worship announced by the shrine. Foreign visitors must be able to understand Japanese or be accompanied by a Japanese person. You must also carry a mobile phone that can make domestic calls in Japan. Descending times must be strictly observed, and worshippers must report back to the shrine after going down the mountain. Photography, the use of fire, and food consumption with the exception of necessary water supply are prohibited in the mountain. The unauthorized picking of plants is of course banned.

If you can comply with the above regulations, please apply for miwayama tohai at Sai Shrine, one of the sesshas (auxiliary shrines) within Omiwa Shrine.

If you're spending a few days in Nara, stray off the beaten path and head to Omiwa Shrine (and the Hashihaka Mound too, if you're so inclined). It's definitely less-developed as a tourist hotspot, but because of this, you're able to fully enjoy its particular ambiance that straddles the border between the land of men and the land of deities, between the historical and the mythological.