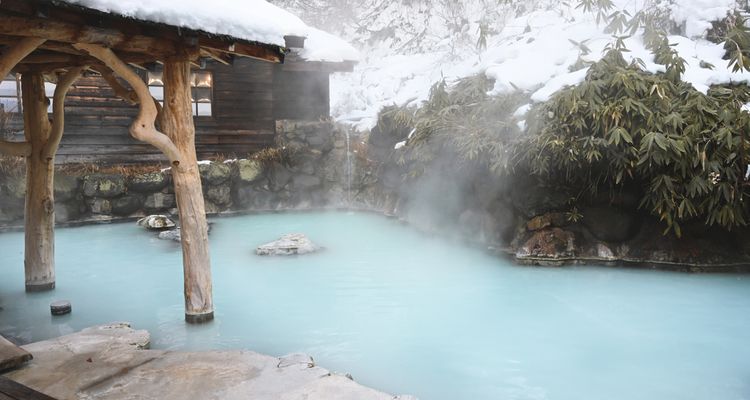 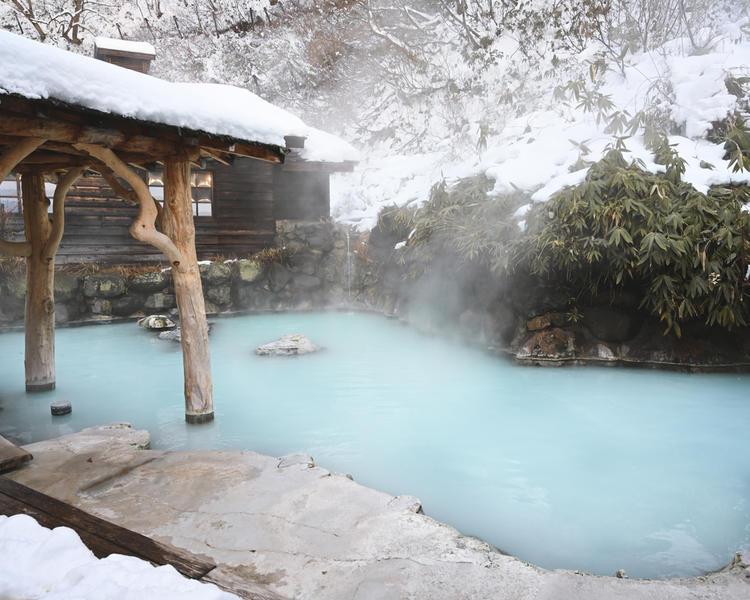 Have you ever had such an experience, disappointed with Japanese spas to be too crowded, commercialized, or not really natural. Nyuto Onsen located in a beech forests in a national park is a great place to change your idea whether you like Onsen or not.

Where Is Nyuto Onsen Located?

Nyuto Onsen, comprised of seven spas, is located in the Towada-Hachimantai National Park in Akita prefecture. Seven accommodations are dotted along the valley covered with virgin beech forest. Each spas boasts their own spring sources. Over ten sources flow out from the underneath of deep forest and have different natures.

Tsurunoyu, with a history of over 350 years, is the oldest spa in the village which once served the local feudal lords. The thatched building used exclusively for them still exists. There are four baths with different mineral compositions including its iconic mixed-gender outdoor bath where you can feel hot water spouting out from some parts at the bottom of the large bath. If you stay here and is lucky enough to get a room with an irori, fire-place, you can dine around the fire and enjoy the traditional Japanese lifestyle.

Yamanoyado, an annex 1.5km from Tsurunoyu, is also an interesting place with traditional ambience within modern facilities. Though it's approximately 20years-old, the building built in the traditional style with materials from the area, offers us a timeless atmosphere. The white hot spring draw its water from Tsurunoyu, 100% natural sauce containing sulfur and other kinds of minerals. Here, meals are served at a restaurant with irori, a fire place. The delicious local cuisine using iwana, Japanese char, and sansai, wild vegetables, or sake after nice soak in hot spring is also great attraction of the area!

Kuroyu, with a long history of 350 years, is tucked in the depths of the beech forests. Thus, it opens from the end of April to the end of November. Remember this area has quite heavy snowfall in winter! You can see the source, simple hydrogen sulfide spring, spouting out at the river beside this rustic inn.

Taenoyu is a modern ryokan with two sources of springs - a transparent, calcium & magnesium, and a yellowish sulfuric acid saline spring. The feature of this place is the gender-mixed outdoor bath with the backdrop of mountains and a river running aside. There are only Japanese rooms available for accomodation, but its dining room has table-seating.

Kyukamura is renewed recently and has the most modern facilities in the village. You can choose from Japanese or Western rooms, and buffet style or course menus for meals as well. Delicious local cuisine would fill you up. There are two baths with different sources- sodium & carbonate and simple sulfur springs.

Other three inns, Ganiba, Magoroku and Ogama, are also attractive with different atmospheres. Seven Onsens are open to one day visitors for 510 yen (720 yen for Taenoyu). Though Nyuto Onsen is in seclusion and it's easier to drive here with your own vehicle, there's also public transportations available- local bus from Tazawako station on JR line (50 mins) or airport liner directly from Akita Airport (around 2 hours). If you stay at one of seven Onsens, you can purchase Onsen passport for 1,550 yen, accompanied with a circuit bus service running around those Onsens.