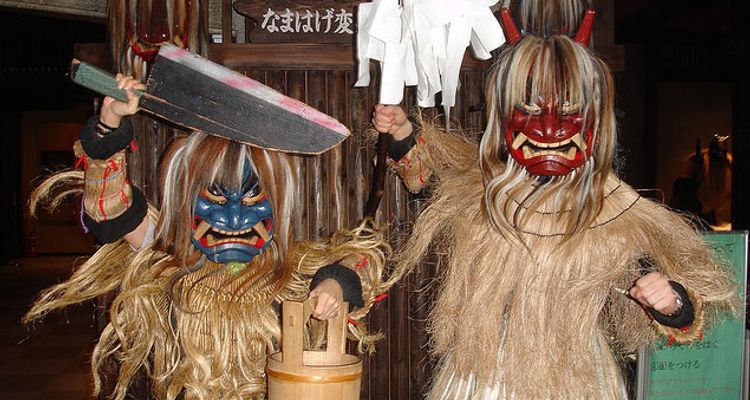 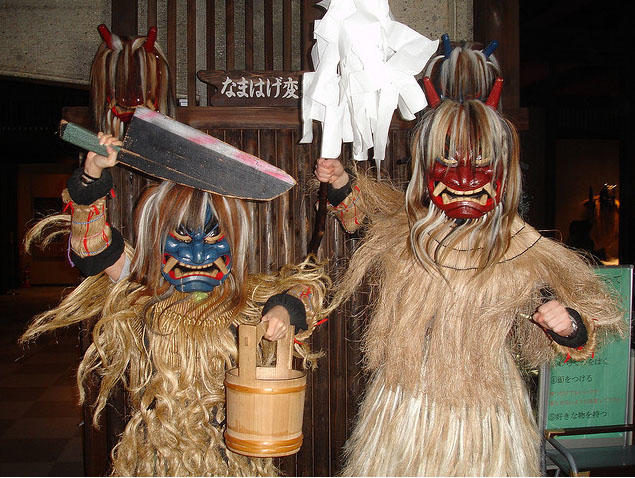 Namahage: A New Year's Tradition in Akita Better than the Countdown

Looking for something different to bid goodbye to 2014? Join the Namahoge folks to scare the kids around.

As 2014 is coming to an end, many of us are busy planning our Christmas and New Year celebrations. If you are tired of getting drunk counting down on New Year’s Eve and happen to be in Japan, why not head to Oga City in Akita Prefecture to experience a different kind of New Year’s count down. One of the Important Intangible Cultural Assets in Japan, Namahage, is a traditional practice in Oga city. It is also known as “Oga no Namahage” or “Oga Namahage Festival” in English. The name “Namahage” is referring to a deity who looks like a demon, which are called "oni" in Japanese. On New Year’s Eve, a few young people will dress up as Namahage  - with large masks (red for female and blue for male), straw raincoats (known as kede), waist-bands, wooden knives and pails. They receive the spirit of the Namahage at a shrine before setting off into the neighborhood to give blessings and protection to the villagers. The Namahage will dance along the way while howling.

The first Namahage knocks at each door and asks for permission to enter the house. When Namahage go into a house, they run around the house, growling “Any crybabies here?” “Does the woman of the house get up early?” “Any lazybones here?”

To calm down the Namahage who also threatens to carry off the bad kids in the house, the head of the house will usually offer the deities a traditional meal (usually rich cakes) and sake. This kind gesture will then be returned by the Namahage with prayers for the family’s good health and fortune for the coming year.

The Namahage stamp 7 times when entering the house, 5 times before being served food and sake, and 3 times before leaving. Before leaving the house, the Namahage will warn the kids to behave and obey their parents or he will take them away with him.

If the house has experienced some misfortune in the year, or there is a sick person in the house, Namahage will not enter the house, but have a small ceremony at the gate and move on to the next house.

After the Namahage leaves, the family will pick up the straw fallen from the kede because it is believe that it will bring good health and prevent sickness. The Namahage event is derived from the belief that a deity bringing good fortune makes a visit to the village from elsewhere in the New Year, and similar events are found in other regions of Japan.