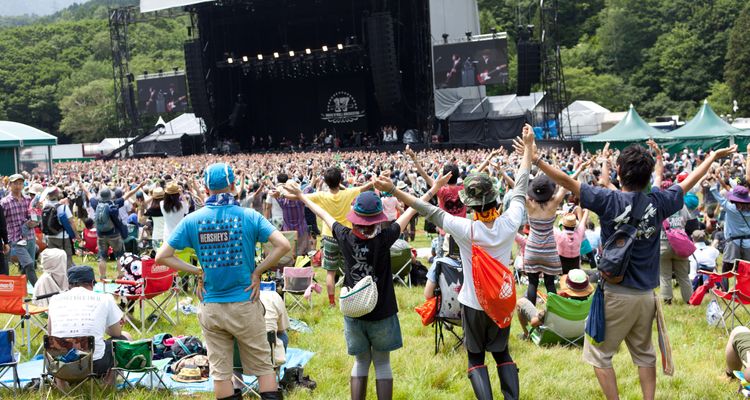 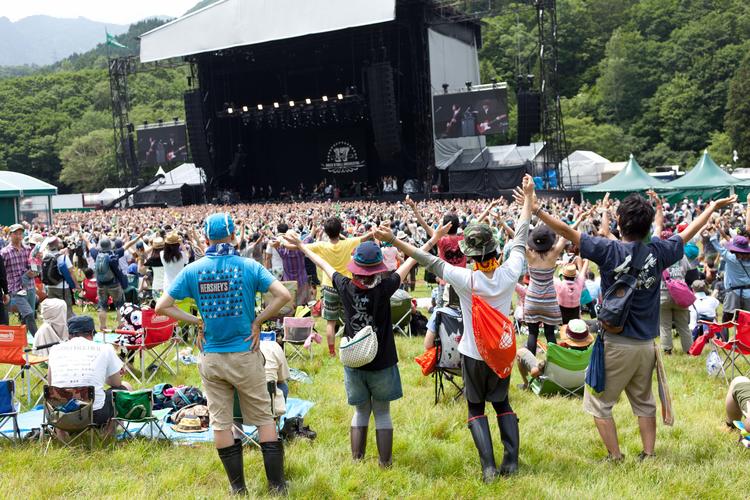 Just like in other countries around the world, music festivals are held every year throughout Japan. The lineups of these elaborate festivals naturally feature a diverse range of genres and artists, but they also offer so much more, like gourmet food from popular Japanese restaurants, craft stores selling items made by local artisans, and of course the venues themselves, which are often located in picturesque spots surrounded by nature. However, as of March 2020, you should be aware that festivals are being canceled or postponed one after another due to the effects of COVID-19. That’s not all. Due to the Tokyo Olympic and Paralympic Games having been planned for 2020, some festivals have changed their schedules so as to not overlap with the Games. Read this article for up-to-date festival dates, instructions on how to get to the venues, ticket prices, as well as the latest information on cancellations and postponements.

Things You Should Know About Japanese Music Festivals

Music festivals are held all over Japan each year from March, when spring brings warmer weather, until the pleasant autumn days of October. There are so many different venues to choose from, including outdoor festivals located in the heart of nature, metropolitan festivals with easy access from big cities, international festivals hosting big-name foreign artists, and festivals featuring all local artists.

And just like festivals held in other big cities around the world, these events aren’t just about the music. Each festival offers something different to enjoy, such as venue decorations that you won’t find anywhere else, drinks from major international and Japanese brands, local gourmet food from popular restaurants, carefully-selected outdoor goods on sale, as well as performances at specially installed stages.

- When purchasing food, drinks, and other items at the venues, keep in mind that some booths do accept cashless payment, but often you can only pay with cash, so it’s recommended to bring some money with you.

- Not many festivals offer seating, so bring a picnic sheet or folding chairs with you.

- Many Japanese music festivals in recent years have put a lot of thought into protecting the environment through plastic waste reduction and waste segregation, so bear this in mind and properly dispose of any trash when attending these events.

Japan’s three best music festivals would have to be the Fuji Rock Festival, Summer Sonic (renamed to Super Sonic in 2020), and the Rock in Japan Festival. These festivals always put a lot of effort into pleasing not just Japanese people but also visitors from all over the world. If you get the chance to attend one of them, you’re not just going to enjoy your Japan trip all the more, you’ll also have something memorable to brag about to your friends and coworkers! Read on to find out the best parts of each festival.

This is Japan’s largest outdoor festival that brings together prominent artists from across the globe. The lineup includes performances from more than 200 young talents and prominent artists, foreign and local, and in 2019 more than 130,000 people came to see them perform. Both in name and substance, this is Japan's most iconic summer festival, which is why, in 2016 and 2017, it came 3rd in the Festival 250 ranking that rates the world's most prominent music events.

Fuji Rock Festival takes place at the Naeba Ski Resort in picturesque Niigata Prefecture. As it’s easily accessible from Tokyo by shinkansen and shuttle bus (which take approx. 2 hours) or by car (approx. 3 hours), a lot of the festival-goers come from around Japan’s capital. The venue, which is large enough to have as many as 5 main stages, is complete with everything including leisure facilities, a river flowing through it, and the world’s longest gondola lift. You can enjoy music here from midnight until early dawn and even well into the morning, so many festival-goers stay at local campsites or nearby accommodations and have fun every day that they are here.

One thing to note is that in a typical year, this festival is held at the end of July, but because of the Tokyo Olympic and Paralympic Games, the 2020 dates have been changed to August.

The 20th anniversary of Summer Sonic in 2019 was a massive success in terms of ticket sales. A 2020 special edition of the festival will be known as Super Sonic due to the usual venue, Makuhari Messe, being used for the 2020 Tokyo Olympic and Paralympic Games.

The festival is held in two locations at once: Chiba, located right next to Tokyo, and Osaka (the Chiba event is known as the Tokyo festival). Outdoor festivals in Japan are often held in remote locations surrounded by nature, but the appeal of Super Sonic is undeniably its easily accessible location. Furthermore, in any given year, the festival’s lineup includes popular artists from around the world who are bound to excite any music lover.

Another huge attraction of this festival is Midnight Sonic, a late-night party normally held on the first and second day at the Tokyo Summer Sonic festival, where you can enjoy great music to your heart’s content all night long. (This event has not yet been announced for Super Sonic.)

As of 2020, Rock in Japan is Japan’s largest outdoor music festival. The unique thing about it is that it only features Japanese artists and simultaneous performances on seven different stages.

The headliners of Fuji Rock Festival and Summer Sonic are mostly international artists, but the lineup of Rock in Japan Festival persists to the end with domestic talent. The festival doesn’t confine itself to rock, though. It actually features over 200 artists from a variety of genres, including hip hop and pop idols. This is the ideal festival for those who want to experience the latest Japanese music.

Other Japanese Music Festivals in Order of Scheduled Dates

This is the Japanese version of the British loud rock fest. It first kicked off in Japan in 2019.

This is the 15th anniversary of the metropolitan music and culture festival powered by environmentally-friendly green energy. Synchronicity is a circuit event held at multiple venues at the same time.

This is an outdoor festival hosted in Aichi Prefecture, the home of the Japanese rock band 04 Limited Sazabys. It’s held at Moricoro Park, the biggest park in all of Aichi Prefecture, well known for its green spaces.

This is a camping festival envisioned by the outdoor fashion magazine GO OUT. It’s held at the Fumotoppara campground in Fujinomiya, Shizuoka Prefecture, which offers great views of Mt. Fuji.

An internationally-renowned outdoor festival where you can enjoy quality dance music while surrounded by the splendor of nature.

Otodama Sea Studio is a beach hut music venue that’s only open during spring and summer. There is a different performer every day from a rotation of over 400 artists, with performances on weekends and national holidays from April to June, then every day during July and August.

This was scheduled to be the Dutch EDM festival’s first time in Japan.

This is the Tohoku region’s biggest music festival. One of its attractions is the beautiful location, which is surrounded by the splendor of nature and offers amazing views of the popular Mount Zao.

This is the largest rock music festival in Saitama, a prefecture right next to Tokyo. The festival is held over four days.

This is an outdoor festival hosted by the music magazine Rockin'On Japan. The setting created by the expansive stage area and its compact but functional venue layout is one of the highlights of this festival.

2020 will be the first time that this British jazz festival (the largest of its kind in Europe) will take place in Japan.

This is an outdoor festival offering live music and a marketplace featuring over 500 vendors from all over Japan. You can also camp at some parts of the venue.

This is a large-scale outdoor festival known affectionately as METROCK. It’s an assembly of Japan's prominent artists, held in both Osaka and Tokyo.

This is a camping festival where you can enjoy the best selection of dance music from around the world in the great outdoors of Kyoto.

This is Japan’s largest surf culture festival that aims to share the beach lifestyle and culture through music, art, and film.

This is a large-scale outdoor festival known affectionately as METROCK. It’s an assembly of Japan's prominent artists, held in both Osaka and Tokyo.

This festival is the successor to Taico Club, a popular event that was held every year from 2006 to 2018.

This is the biggest rock festival to ever be held in the Hokuriku region.

Itadaki is an environmentally-friendly festival that’s powered entirely by bio-diesel, which comes from refined waste oil. Another highpoint of this festival is that the timetable allows you to see every artist in the lineup.

This is a festival organized by Japanese performer Ichiro Yatsui from Elec. Comic. The Yatsui Festival is an urban tour event that combines music, comedy, musicians, idols, and cultural personalities; it is operated across 13 venues in Tokyo's Shibuya area.

This is an outdoor festival organized by Japanese rock band 10-FEET.

At this Hokkaido outdoor festival, you can enjoy more than just the live music, such as camping, an amusement park, and delicious local specialties.

This is the largest summertime festival to ever take place on the island of Kyushu. It will be held by the sea at the picturesque Uminonakamichi Seaside Park in Fukuoka, the home of tonkotsu pork broth ramen which has recently become super popular outside of Japan.

This outdoor festival held in Otaru, Hokkaido, is the biggest all-night rock event in Japan.

This is a veteran rock fest representing the Chugoku and Shikoku regions. In 2020, it’ll be celebrating its 20th anniversary. The event typically sees more than 700,000 festival-goers and is affectionately referred to in Japanese as “monbasu.”

This is a summertime outdoor festival hosted by the music channel Space Shower TV. The venue is a cultural exchange site located on the shores of Lake Yamanaka, popular for its amazing views of Mt. Fuji.

This is an iconic Kansai camping festival created with the idea of “everyone having fun.” It’s held at a mountain campground in Hyogo Prefecture.

This is a summertime outdoor rock festival held at Izumiotsu in Osaka Prefecture. Many famous Japanese artists participate in this event.

This is an Osaka dance music festival. It's held at Tarui Southern Beach in Sennan, Osaka, on the opposite shore from Kansai International Airport. Aside from music, the festival highlights include good food, fireworks, and swimming.

This outdoor festival was started with the idea of celebrating 100 years of seaside music. It’s held every year around Kagawa Prefecture’s Shodo Island and Naoshima in the Seto Inland Sea.

This is an outdoor festival put together by Takanori Nishikawa (T.M. Revolution), a popular artist and tourism ambassador for his home prefecture of Shiga. The festival raises awareness about the environmental protection of Lake Biwa, Japan’s largest lake.

*This is the publicly available information at the time of writing. Events may be canceled or postponed due to COVID-19 or weather conditions, so please check the festivals’ official websites for the latest information.
*Ticket prices may change depending on the time of sale.
*Separate parking and camping tickets may be required for people coming by car or staying overnight.
*Some tickets are sold via lottery so purchase yours quickly. Please check the official websites for more details