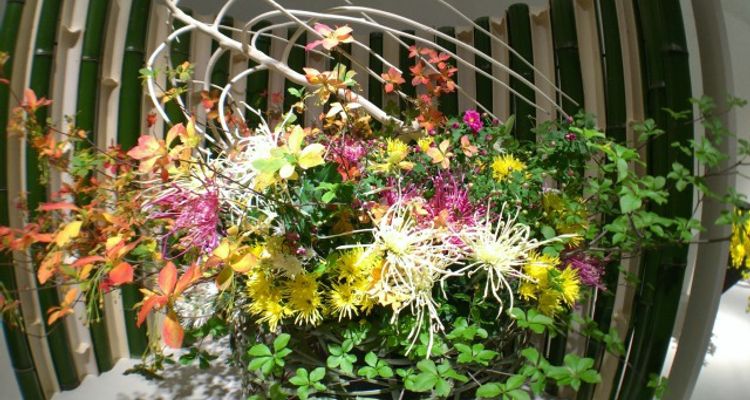 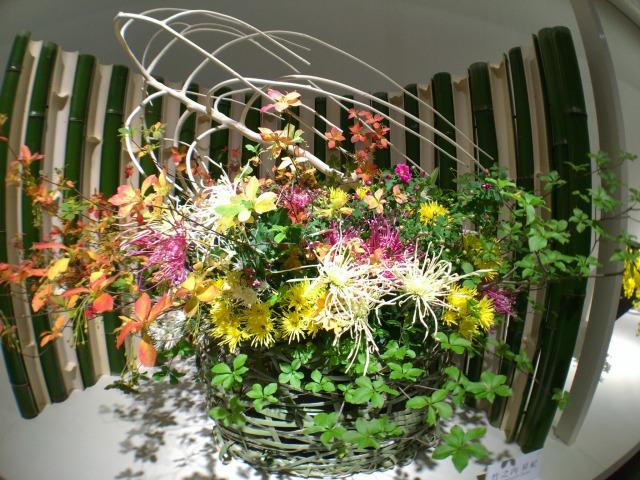 Japan's flower arranging tradition is called "kadou" or "ikebana". Along with other art forms like bonsai, its charm lies in how you can experience the four seasons through it. Unlike flower arrangements from other countries, kadou also uses living trees sometimes.

"Kadou is an appreciated art form that may use only plants or primarily uses plants but combines them with other materials."
"Kadou uses not just bright flowers, but also branches and tree trunks, leaves, moss, and other parts of the plant. On this point, kadou differs from floral arrangements from around the world."

A piece made only with a tree Using the moon-shaped flower vase is a technique called "Moonlight Tube" (gekkoutou).
It's a piece that uses the arbor to represent the vitality of moonlight.
Using just this plant shows off the season in which it was created, and it's a very pure arrangement.

In Japan, a symbol of an auspicious event are three living pine, bamboo, and plum trees.
Within the harsh winter, pine and bamboo trees stay green, and when the plum blossoms bloom in late winter, it's seen as a sign of perpetual youth and longevity, so these three plans stand for a special and auspicious occasion.
This is a very dynamic arrangement.

Using an old tree as a backdrop Kadou arrangements aren't just about putting plants into flower vases.
Like the picture above, the old tree branch wasn't placed into the vase but accompanies the arrangement as a backdrop juxtaposing the vivid flowers to create an impressive image. It looks like they cut these Japanese irises out of the lake after blooming and transplanted them into this vase.
Kadou has been a way to enjoy the seasons even from inside your room since time immemorial.
Since the flowers have been cut, they live only for a fixed period of time, so you can ponder the mystery of life. For large events and other such occasions, some people prepare jumbo-sized kadou arrangements.
So that the flowers don't die during the event, it is the work of the arrangers to watch the flowers throughout the whole event.
In places where the air conditioning is set very high, an important job is to make sure that the atomizer that helps keep the arrangement from wilting doesn't break.