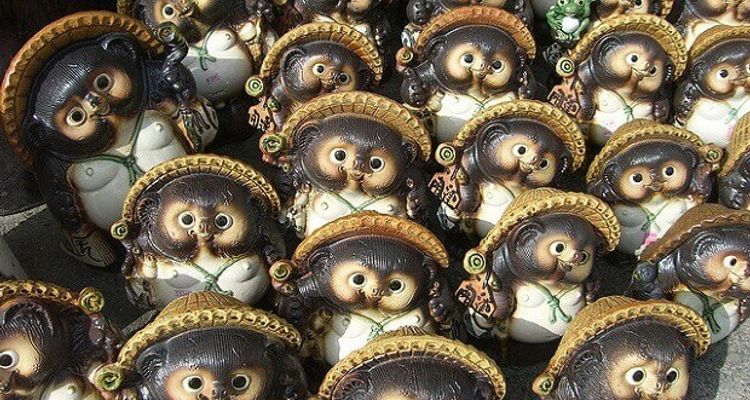 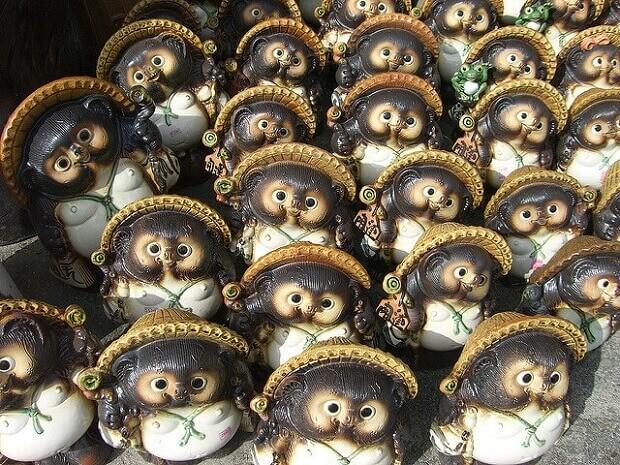 Learn about the mysterious and lucky Japanese Shigaraki tanuki!

If you would like to be successful, I recommend you to purchase lucky charms. Shigaraki tanuki is very cool with 8 lucky meanings, made of pottery. It is popular in west part of Japan. And I will explain its birthplace, Shigraki, one of the Six old kilns. I bet you like it! Let’s look at the entrance of Japanese homes and shops in the Kansai region, where they sometimes place a tanuki made in Shigaraki in Shiga prefecture, the western part of Japan. Why do they put this specially made Shigaraki tanuki there?  There are 8 reasons.

Let’s look at photos of tanuki, and I will explain to you each of the lucky items.

All the belongings of a tanuki have lucky meanings.

They are called hassouengi, or the "8 good-luck things" in English. If he wears a hat, he is safe from sparks.

That means the tanuki protects you from disasters. Big eyes mean you can pay careful attention to your customers. You can buy and sell on credit even if you have little money with you. You always have plenty of food and drink.

You have stability; your business is safe even in recession. You can keep calm and deal with difficult things and be a person with guts. Being amiable is indispensable when it comes to business. A tanuki's testicles are an allusion to having a lot of money - so, the bigger they are, the more gold you have.

It is the name of a region in the Kansai area, about 70 minutes' drive from Osaka.

Shigaraki is famous for its pottery and stoneware, and the area is one of the "The Six Old Kilns"  in Japan.

The name Shigaraki describes a collective group of ceramic products made in a similar geographic area. Shigaraki ware is said to have begun when tiles were constructed for the Emperor Shomu’s Shigaraki-no-miya Palace in 742. However, evidence has shown old kiln remains in the ruins of Shigaraki village dating back to the Kamakura period and early in the Muromachi period. Why is Shigaraki one of the "The Six Old Kilns"?

This is because it has plenty of clay, which is from the ancient Lake Biwa layer. Lake Biwa, which is the biggest lake in Japan, has been moving gradually.

And the place which was once on the bottom of lake biwa contains a lot of good clay for pottery. That’s one of the reasons why shigaraki became famous for pottery and stoneware.  Even now,  much clay in other pottery places is bought from Shigaraki. Taking advantage of having plenty of caly,  a lot of big art craft made of clay are made in Shigaraki.

Taro Okamoto and the Shigaraki Exhibition

Do you know the famous artist Taro Okamoto?   He made some of his best known works in Shigaraki.

His representative work and a symbol of the Osaka Expo, "Tower of the Sun," as well as "Black Sun" were made in Shigaraki. Okamoto Taro has expanded his avant-garde artistic activities and continued to challenge established concepts and values in a wide range of genres including painting, sculpture and crafts. With a free and bold expression that shakes the foundation of the spirit, in this modern society where information and materials intensify confusion, he has a variety of suggestions to offer. We are celebrating Okamoto Taro's 100th anniversary in Heisei 23. He was born in 1911, or Meiji 44.

Okamoto Taro's artistic activities in Shigaraki do not have a small influence on the rest of Shiga's arts. The young people who learned under Okamoto Taro are now potters who represent the lake country.

In Shigaraki, many famous artists are making their works. There is an artist-in-residence program. Artists from all over the world are getting together and creating fantastic works of art in Shigaraki.