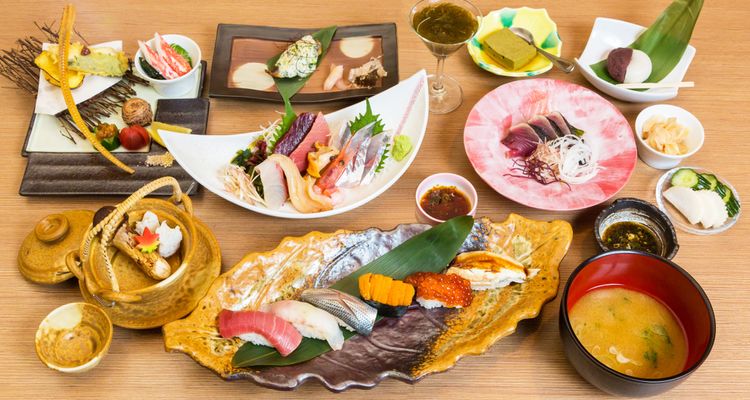 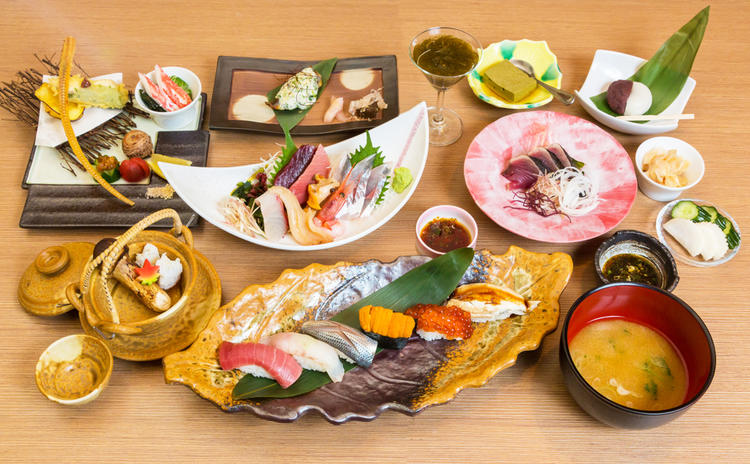 Kaiseki Ryori – The Most Exquisite Example of Japanese Fine Dining

Japan is well known for its wide range of fantastic cuisine, and the most popular Japanese dishes, such as ramen and sushi, are easily found in restaurants all over the world. But kaiseki ryori is one style of Japanese food you may not have heard of before. In this article, we'll introduce you to the wonderful world for kaiseki ryori, steeped in centuries of tradition.

What Is Kaiseki Ryori?

Centuries ago, it made its debut in the form of simple meals served during Japanese tea ceremonies to warm the body and ease hunger before tea. At some point, it took off among Japan's aristocrats and began appearing in grand banquets and other celebrations.

The kaiseki ryori of today is incredibly prestigious. Made using only the finest ingredients, it is considered to be the epitome of fine dining in Japan and is compared with haute cuisine in the West. Though leaning closer to the type of fare served to the Japanese upper class in the past, it has been influenced by various cuisines, including those served at tea ceremonies, samurai households, and Buddhist temples.

You can enjoy modern kaiseki ryori at specialized restaurants and traditional Japanese inns, where it has become as much as an event as it is a meal. The more simple version of it can still be found at tea houses today, often under the name "cha-kaiseki ryori" to distinguish it from its fancier sibling.

The easiest way to tell them apart is by checking what beverage is served at the beginning. Tea means it'll be a more simple affair, whereas sake means you're about to get a five-star meal. They are also written differently in Japanese (note, they have the same reading, kaiseki ryori!) - 懐石料理 for the meal that comes with tea, 会席料理 for the elaborate version - but many places use the Japanese writings indistinguishably, so be careful.

What Makes Kaiseki Ryori So Special?

In this article, we will mainly focus on the modern version of kaiseki ryori.

This version of kaiseki ryori consists of multiple impeccably presented dishes with a key emphasis on seasonal and local ingredients. Kaiseki ryori chefs often decide on the courses depending on the freshness of the ingredients available to them on the day. Each course is prepared in order to enhance and embellish the natural flavors of every dish. In addition, as much attention is paid to the exquisite presentation of kaiseki ryori as it is to the taste. Highly decorative, kaiseki ryori is considered to be an art form and a visual feast as well as a culinary experience.

Huge attention to detail is given to each individual course, with every tiny detail of kaiseki ryori carefully crafted. Even the plates and bowls on which each dish is served are chosen for their aesthetic appeal in order to complement the food, often incorporating designs that have a connection with the cuisine or the season. Courses are artfully arranged and commonly dressed with flowers that help to highlight the seasonality of the whole dish.

How Many Courses Are There in Kaiseki Ryori?

Kaiseki ryori is a multi-dish meal that is spread across four courses - starters, main courses, shokuji, and dessert. Typically, the starter course consists of an aperitif, followed by a plate of small appetizers. After the appetizers comes a series of main courses, each of which typically showcases a different method of cooking. Expect a soup at the beginning, followed by sashimi, a boiled dish, a grilled dish, a deep-fried dish, a steamed dish, and a vinegared dish. After the main courses, shokuji is served, which is a set consisting of a portion of rice, a bowl of miso soup, and a plate of pickled vegetables. Finally, the last dish is a small dessert, which is usually one small, sweet dish, such as wagashi or a piece of fruit.

The total number of dishes served will be decided by the chef and will depend entirely on the season. Only the freshest ingredients are chosen, subject to their availability at the time.

What Are the Main Dishes of Kaiseki Ryori?

Kaiseki ryori begins with a pre-meal aperitif drink called "shokuzen-shu." This is usually a small glass of local sake, sweet wine, or a seasonal liqueur.

After shokuzen-shu, a very small appetizer called "sakizuke" is served. This is usually a little something to whet the appetite, often compared to an amuse-bouche in French cuisine.

After shokuzen-shu and sakizuke, a tray of bite-sized appetizers called "hassun" is served, typically consisting of a selection of local delicacies. These may include a few small bowls of seafood accompanied by local vegetables.

The first dish of the main course is often suimono, which is a small bowl of soup typically garnished with seafood, tofu, or vegetables.

Otsukuri is a dish of thinly sliced sashimi such as sea bream or flounder. The slices of sashimi are delicately sliced and beautifully arranged on top of shredded Japanese radish and accompanied with condiments of soy sauce and wasabi for extra flavor.

Takiawase, or nimono, is a boiled or simmered dish that is usually made with a blend of seasonal vegetables along with either fish or meat.

Yakimono is a grilled dish usually consisting of fish with the bones removed for easier consumption. High-quality meat such as local Japanese beef is sometimes served instead of fish. As with all of the courses in kaiseki ryori, the main ingredients will depend on what’s in season in the local area.

Wanmono, also known as futamono,  is typically another soup dish. Either meat or fish are served together with seasonal vegetables in a clear, seasoned soup.

Agemono is the Japanese term for deep-fried food. In kaiseki ryori, agemono normally consists of tempura, where meat, seafood, or vegetables are coated in a light batter and deep fried. Agemono is usually served towards the end of the main course.

Sunomono is the name for vinegared dishes. It is considered a palate cleanser, typically made of vegetables alongside seafood such as octopus or shrimp with a vinegar dressing.

Shiizakana is one of the largest dishes in a kaiseki meal, typically consisting of a hot pot meal with meat or seafood and vegetables.

Shokuji is the final set of savory dishes and it comes after the main courses. A shokuji set consists of a bowl of rice, called "gohan," miso soup, and a dish of pickled vegetables, called "tsukemono." Though they are served together, it is customary to eat each dish separately so as not to spoil the flavors of the others.

The final course is dessert, called "mizumono," which typically consists of just one single, small, sweet dish. This will often be either fruit compote, sorbet, a small cake, or traditional Japanese wagashi sweet. Ice cream, particularly matcha ice cream, is also a popular dessert, too.

Dessert is usually served with matcha, which is a powdered Japanese green tea. The matcha served in kaiseki ryori is very high in quality due to the course’s origins as a part of the Japanese tea ceremony.

How Is Kaiseki Ryori Served?

In a kaiseki restaurant, diners will tend to sit either at a counter facing the chef or in a dedicated dining room. Each dish in kaiseki ryori is generally served individually in a set sequence, with the exception of the shokuji course, where the three dishes are brought out together. Each course is served on its own tray, and each dish is served on beautifully decorated plates and bowls that represent the seasonal produce used in the meal. Some dishes are garnished with carefully arranged flowers or edible plants to enhance the visual aspect of the course.

How Do You Eat Kaiseki Ryori?

Kaiseki ryori is a very formal meal and requires a high level of decorum and etiquette.

Most courses are eaten using chopsticks, though some, such as certain soup dishes or dessert, are eaten with a spoon.

Diners should never prod or try to slice food with their chopsticks. Instead, carefully pick up each piece of food by the tip of the chopsticks. Between bites, the chopsticks should be placed down on the chopstick rest and never across the top of a plate or bowl.

Dishes served in small bowls should be picked up and raised towards the mouth to be eaten from. For soup dishes, when consuming the broth, you can pick up the bowl in both hands and drink directly from it.

Where Can You Eat Kaiseki Ryori?

Kaiseki ryori is not served in just any Japanese restaurant. Historically, kaiseki ryori is most associated with restaurants found in traditional Japanese inns called "ryokan." Besides ryokan, a specific type of high-end restaurant in Japan called "ryotei," known as a meeting place for businessmen and politicians, also typically serves kaiseki ryori. There are also modern restaurants that specialize in kaiseki ryori, and these also tend to be quite formal establishments.

How Much Does Kaiseki Ryori Cost?

Thankfully, there are cheaper ways to enjoy kaiseki ryori. Many ryokan in Japan offer accommodation and kaiseki ryori packages, which do help to shave a little off the regular price of kaiseki ryori, though this is obviously dependent on the type of package on offer.

Another way to save money on kaiseki ryori is to book a lunch time meal at a kaiseki restaurant. Many kaiseki restaurants offer a pared down lunch menu during the daytime which usually costs a lot less than an evening meal. A kaiseki lunch will omit several dishes from the full blown meal, but will be priced at around half the cost as a result. Prices for a kaiseki lunch can be as low as 5,000 yen per person, a comparative bargain compared to the cost of the real deal.