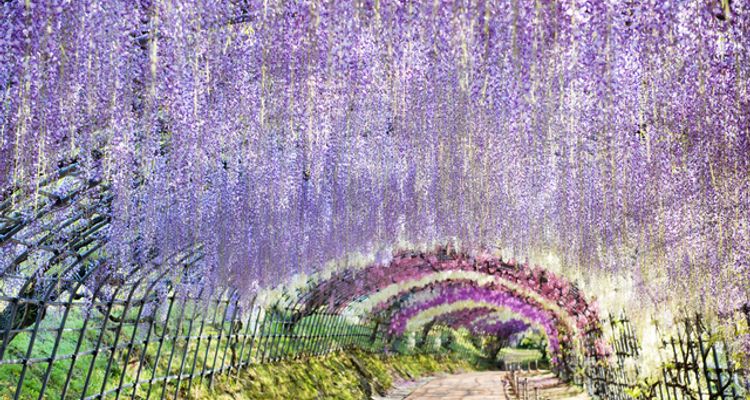 Just Like a Flower Curtain! Famous Wisteria Viewing Places in Japan Awash With Color From Spring Until Early Summer in 2017

Fuji no Hana (wisteria) have been beloved by both Japanese and foreign tourists because of their lovely and sweet, but vulnerable shape. Here are 5 recommended spots with the latest and most updated information for viewing wisteria blooms.

What is Fuji no Hana (Wisteria)? The Fuji no Hana (wisteria) has been said to be an ancient flowering tree in Japan, and it has been cherished by Japanese people for centuries. You can even read about it in Manyo-shu (the oldest existing collection of poetry that is said to have been compiled around the late 7th or 8th century). The wisteria's characteristic is that it blooms small layering flowers that look like butterflies sitting on a flower. These flowers become bunches and as they bloom more and more, they start to hang toward the ground. Wisteria blooms beautiful flowers with various colors such as pale purple, blue-purple, pink, and white, which really brings joy to our eyes. The blooming season depends on the variety, but it usually starts around April and lasts to June. You will definitely want to go see the blooms of this flower on a perfectly comfortable spring day!

This place was chosen as one of "Japan's 31 most beautiful places" by CNN in America. Including whites and pinks, the incredible beautiful gradation of the tunnel, created by wisteria, is out of this world. Its blooming season coincides with Golden Week which are consecutive holidays in early May in Japan (from April 29th to May 7th in 2017) so there are expected to be huge crowds of people coming to this garden during this period. Also please note that if you are going there during April 27th to May 14th, you need to buy tickets which are sold in advance at convenience stores. Please allow yourself plenty of time when you visit the garden! The site of the layered wisteria flowers floating in the warm sun beams during spring until early summer is reminiscent of the spring aurora. You will surely understand the reason why Japanese people have cherished this flower since the ancient times!

Optimal Viewing Time: Around early May each year

Access:  A 15 minute car ride from Kitakyushu Urban Expressway Route 4 "Ohtani IC (Exit)" or "Sanji IC (Exit)," from April 22nd until May 11th there is a shuttlebus from 9 AM until 3 PM (2 or 4 times an hour) at Yahata Station on the JR Kyushu Kagoshima Line The approximately 350 wisteria trees of this spot bloom profusely each and every year and it is located in Tochigi, which is famous for the Nikko Toshogu Shrine. A wide variety of enjoyable exhibits such as large wisteria trellises, manicured wisteria gardens, and an 80 meter wisteria tunnel are the unique characteristics that can only be seen at this park.  It is also recommended for those people who like to take pictures of different wisteria vistas. There is also an up lighting of the wisteria during an event called "Fuji no Hana Monogatari" (A Tale of the Wisteria). The floating flowers in the evening create an illusion-like atmosphere.

Optimal Viewing Time: each year from late April until early May (You can check out their homepage on the state of the blooms.)

Daytime: from April 15th until May 21st, starting at 7 AM, ending at 6 PM (during the illumination time, ending at 9 PM)

Open Daily except for the 3rd week on Wednesday and Thursday in February, and New Year's Eve

Access: A 13 minute walk after getting off at the Tomita Station on the JR Ryomo Line or get off at the Ashikagashi Station on the Tobu Isesaki Line and take a shuttle bus for about 30 minutes (which costs 400 yen for a one way trip and runs from April 15th until May 21st, 2017) Normally, this shrine is famous for the aristocratic spirit of Sugawara no Michizane (revered in Shinto as the deity of learning) who is enshrined here and lived during the Heian period (from 794 until 1185). However in April, as part of a yearly event, they hold a festival called the "Gakugyokosai" (Praying to enhance further education and betterment of the mind and body) and the Fuji Matsuri (Wisteria Festival). More than 50 wisteria tree trunks are in bloom which makes us feel like time has reverted back to the Heian period, especially when you see the shrine and flowers in the same view. During the wisteria festival, there are exhibitions such as tea ceremony and flower arrangement which gives us the opportunity to enjoy the culture of Japan and the flowering wisterias to our heart's content.

Optimal Viewing Time: each year from late April until early May (You can check out their homepage on the state of the blooms.)

Kameido Tenjin Shrine, Gakugyokosai/Fuji-matsuri: from April 15th until May 7th, 2017

Illumination period: from April 22nd until May 7th, from sunset until 10 PM (even on rainy days)

Hours of Operation : From 6 AM until 5 PM at Gohonden (main shrine), but the general shrine grounds are open 24 hours

Fukuchiyama is located about an hour and 40 minutes north of Kyoto and this is a well recommended spot called "Sainokami no Fuji" (Sainokami Deity's Wisteria) in Sainokami Park. The plants here are considered to be wild wisterias, and it is said that they are about 1,200 years old. You can see these wild wisteria in other places, but it is kind of rare to find them in the scale which they are here in the park, and they are also designated as a natural treasure of Kyoto.
scribacchino

The Sainokami no Fuji have been enduring harsh rain and winds for 2,000 years, which puts into perspective just how short the lifespan and the vanity of a human is, as well as the actual life force itself, doesn't it?
Optimal Viewing Time: each year in early May (You can check out their homepage on the state of the blooms).
Sainokami no Fuji Matsuri (Festival): May 7th, 2017

[Information about Sainokami no Fuji]

Hours of Operation: 24 hours a day

Access: After getting off at Oe Station on Kyoto Tango Railway Miyafuku Line and riding the Fukuchiyama City "Nikaka-iki" bus on the Nikaka Line for 13 minutes and then it is a 15 minute walk after getting off at Minamiariji Bus Stop Inside this botanical garden there are 20 varieties of wisteria with a total of approximately 200 trees, and you can also enjoy looking at the rare Chinese wisteria. The blooming period depends upon the variety, so why don't you visit as often as you can?

Optimal Viewing Time: around early May (You can check out their homepage on the state of the blooms.)

[Information about the Manyo Botanical Garden at the Kasuga Taisha Shrine]

Open Daily from March to November, closed on every Monday from December to February (If Monday is a holiday, the garden will be closed on the following day)

Hours of Operation: from 11 AM until 9 PM

This year as usual, the best time to go wisteria viewing is in early May. Please go see this beautiful flower which Japan prides itself on, at the very least just one time! You will surely be deeply impressed at the sight of these flowers which took many accumulated years to get to the level of beauty that you see now.