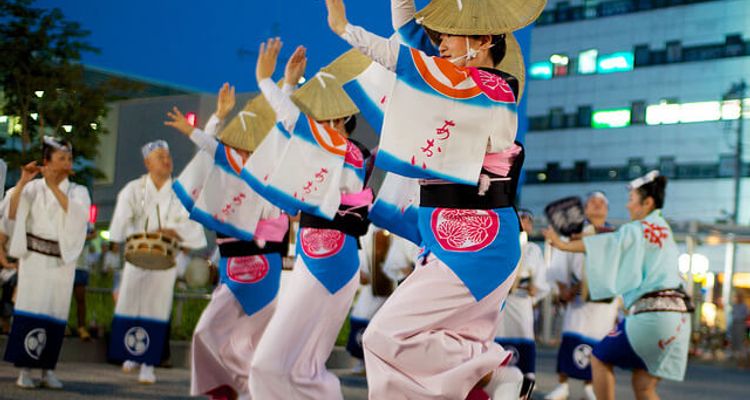 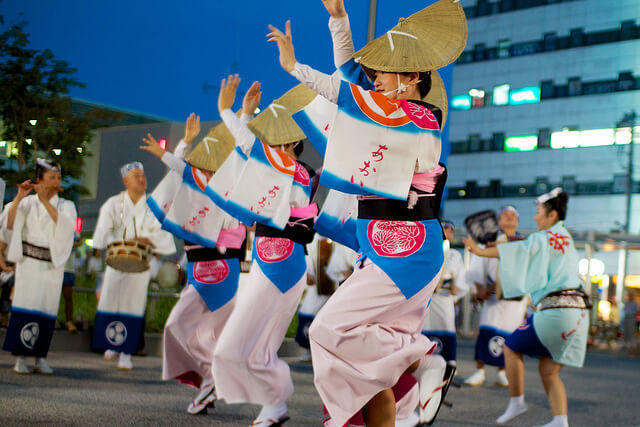 There is the ancient Japanese saying which goes like this: “It’s a fool who dances and a fool who watches! If both are fools, you might as well have fun dancing!” This saying described it well, and that’s why Awa-Odori Folk Dance Festival in Tokushima is attracting more than 1 million visitors yearly. The dance, Awa-Odori is choreographed based on the daily lives of the local residents in Tokushima. It is accompanied by taiko drums, shamisen flute, kane bell and shinobue When dancing the Awa odori, people often gather in groups called ren, with other members of their workplace, school, or other organization. These renusually contain around 50 people, although some may have as many as 200 people. One group made up of all kids is jokingly called Chirudo Ren, a play on the Japanese pronunciation of the English word children. In the Awa odori, men and women wear different costumes and also dance in different styles. Men wear ahappi, a light and loose-fitting cotton coat, and perform a stronger, more dynamic dance. Women wear ayukata, a summer kimono made of light cotton, and amigasa, a hat made of woven rush grass, and dance in a more stylish way. The men's dance involves bending over a bit with legs slightly bowed, raising the hands a little above the forehead, and lightly waving the wrists up and down. The women turn the palms inward and gracefully move the wrists. The dance dates back to 1587 when the feudal lord Hachisuka Iemasa (1558-1638), in celebration of newly-built Tokushima Castle, offered sake to the people of the castle town; the citizens became so drunk they started to dance in an unsteady gait. Awa is the former name of Tokushima.

There's a saying that if you raise your hands and move your legs forward you're doing the Awa odori. That is to say, it's easy for anyone to join in and look like they're doing the dance. But if you actually give it a try, you'll see that moving your body to the two-beat rhythm can be rather difficult.