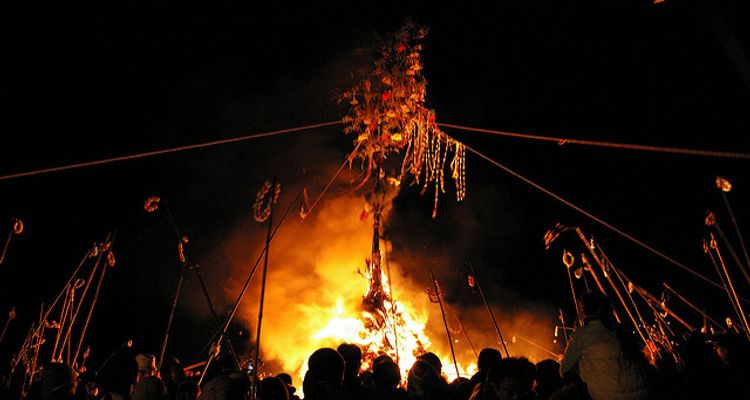 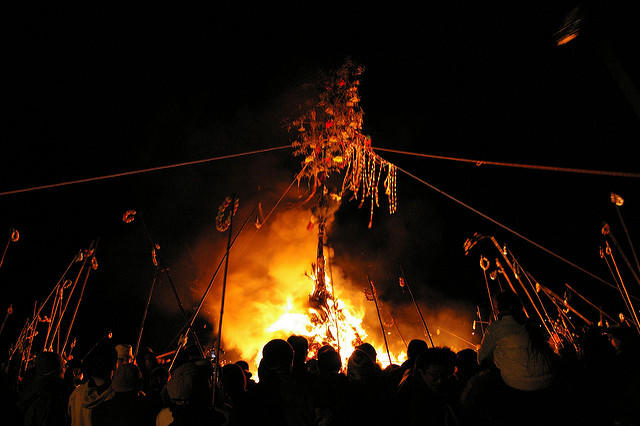 Join one of Japan’s most dangerous festivals: Omihachiman Sagicho Matsuri

One of the most dangerous festivals in Japan, the Omihachiman Sagicho Matsuri is filled with noise, colorful floats, fire, and cheers.

Omihachiman Sagicho Matsuri is one of the three most dangerous festivals held in Japan. This is a festival where people dance along the burning floats in the old town of Omihachiman City in Shiga Prefecture. This annual festival which is also known as Omihachiman no Hi-matsuri (Omihachiman Shrine Fire Festival) is held on the third weekend in March. This year, the two-day festival will begin on March 14th. The name Sagicho refers to the huge floats prepared by the 13 neighborhoods in the city. The floats, which usually take months to be completed, are built with huge pine torches made of woven bamboo poles which are then decorated with red paper. The villagers will use their creativity to decorate the center of the float with ingredients such as beans and noodles to form the animal of the year according to the lunar calendar. This year, expect to see different goats and sheep around. On the first day of the festival around noon, get to the Himure Hachimangu Shrine to get a glimpse of all the participating Sagicho floats. There, the best decorated and beautiful floats will be decided through a vote. After the competition, all the floats will move to the old town for a grand parade with a lot of dancing. Then the floats parade through the town to the accompaniment of shouts of 'Cho yare, yare yare!' The people carrying mikoshi (portable shrines) are called odoriko and even the men are beautifully made up. Historically, the warlord of the Warring States Period, Oda Nobunaga (1534-1582) wore make-up and danced when he organized the Sagicho festival in a grandiose manner in the New Year.

On the next day, the floats begin the festival by parading through the old town. In the late afternoon, all the floats head back to the shrine for the festival climax – the floats fighting, known as “kenka”, and torching the floats. This ending event sees all the painstakingly-made floats being burned down in less than a few hours. As the event also involves the floats fighting, visitors are advised to always stay alert and be careful in order to avoid any possible accidents or unwanted injury. The Sagicho Festival was apparently held for the first time in the 16th Century by newcomers to this district who had been so astounded by a local festival featuring huge pine torches taking place in April in this shrine that they decided to organize an even more impressive festival. This explains why it is held at this time of the year (mid-March) instead of the New Year, for the Sagicho Matsuri originally signified a New Year fire festival.