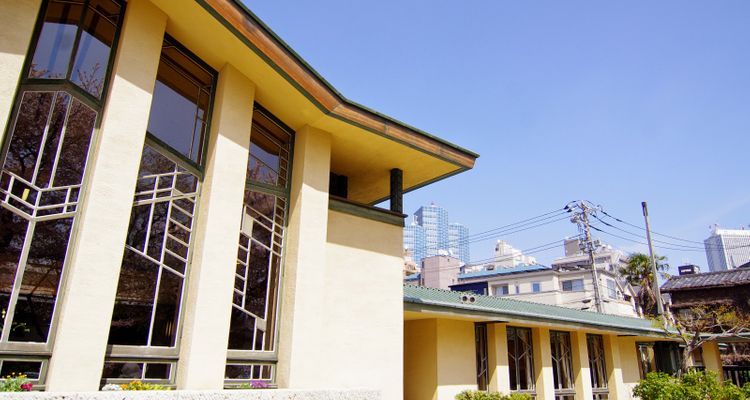 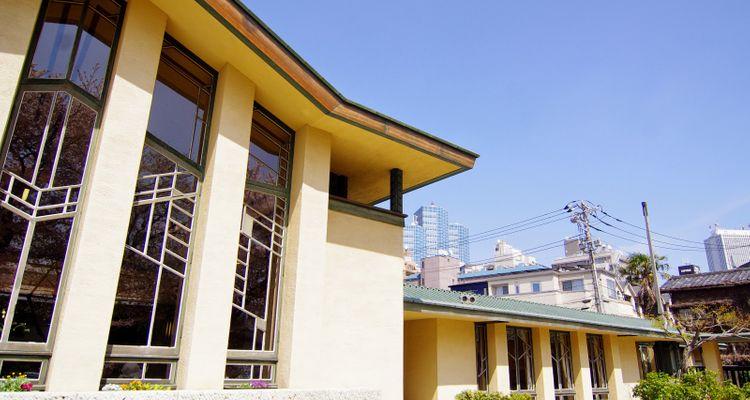 In July 2019, 8 separate works by American master architect Frank Lloyd Wright were registered as world cultural properties. Known as “the Greatest Architect of the United States”, Wright had a profound influence on modern architecture and even kept a close relationship with Japan. Read on to learn more about one of Wright’s masterpieces in Japan.

When mentioning Ikebukuro, tourists familiar with Tokyo should immediately think of keywords including the "Ikebukuro West Gate Park", "major ramen battlegrounds", the "Animate main store", "butler cafes" and "Sunshine City". Indeed, Ikebukuro gives off an impression of being a noisy yet vibrant commercial district, but today we are going to look at a quiet and elegant important cultural property hidden in the corners of Ikebukuro - Jiyu Gakuen Myonichikan.

Take a walk along the southwest side of Ikebukuro station and follow the small path into a residential area where the clamor of people and cars will gradually fade away. Take a turn when you see the Jiyu Gakuen Myonichikan sign on a telephone pole, and the building complex will appear in front of your eyes as the pavement under your feet suddenly becomes a walkway made of stone tiles. Cherry trees are planted on the side of the road by the schoolyard, so on the day we visited, there was a blizzard of sakura petals covering everything in sight.

Upon walking into the campus, you will immediately be struck by its design: the beautiful lights and shadows of the doors and windows, the simple yet modern and slender architectural structure, as well as the inexplicable warmth emanating from this space.

Jiyu Gakuen Myonichikan was originally a Christian girls’ school jointly built by American master architect Frank Lloyd Wright and his Japanese apprentice Arata Endo in the 10th year of the Taisho era (1921). It has now been designated as an important cultural property.

Wright was fascinated by Japanese art and was a famous collector of ukiyo-e (Japanese woodblock painting). When he was young, he saw the Japan Pavilion at the World’s Fair, which was based on the blueprint of the Phoenix Hall in Byodoin Temple, and was extremely touched by it. His architectural style was greatly influenced by Japanese traditional buildings, which can be seen in various features including buildings extending horizontally instead of vertically, limited decorations to showcase the natural building material, open interior space and coordination with the natural environment, and so on.

Besides Jiyu Gakuen Myonichikan, his most famous masterpiece in Japan is the Imperial Hotel (now relocated to Meiji Mura Museum in Aichi Prefecture). With the Imperial Hotel, Wright’s style has deeply impacted many young Japanese architects. Although he doesn’t have many creations in Japan, his influence on the Japanese architecture industry is comparable to Josiah Conder, a British architect known as “the Father of Japanese Contemporary Architecture”.

The campus of Jiyu Gakuen Myonichikan has a three-sided courtyard encircling the school buildings on both sides, much like how the central halls of Phoenix Hall in Byodoin Temple extend into two wings. The hall has large church-like French windows, in which this design might be related to the history of Jiyu Gakuen Myonichikan being a Christian school, yet the lattice windows are decorated with abstract geometric shapes instead of stained glass depicting biblical images.

Below this is one of the entrances to the school building. Both the pavements and columns are made of oya stones, which were Wright’s favorite Japanese stones. Although these unattractive stones appear to be full of holes and spots, they were greatly favored by Wright and became characteristic of his architecture. The unique structure on the pillar in front of the door is a porch lamp that has the same abstract geometric style used on all the doors and windows of the entire campus. This is a signature architectural style of Wright, just like the doves in John Woo’s movies.

Upon entering, there is a shoe cabinet for changing into indoor slippers at the entrance, which is a common feature in most Japanese primary and secondary schools.

Within the double-height hall is a cafe open to the public on weekdays. When purchasing admission tickets, you can choose to add 200 yen for black tea and snacks on top of the basic entrance fee of 400 yen. If you are visiting at night, there is an option of adding 1000 yen for alcoholic options!

The murals in the hall were created by the teaching artist Tsuruzo Ishii and his students during the 10th anniversary of the school. The murals depict the scene in the Book of Exodus of the Old Testament where Moses and the Israelites cross the desert under the guidance of God through pillars of fire and cloud.

The student canteen is located on the second floor. Nearly the entire area is filled with Wright’s signature geometric lines. Everything from the tables, chairs, doors, windows, lighting to the corners of the walls are integrated with the whole building complex. Full of Wright’s classic architectural style, it is as if you entered another dimension called “Frank Lloyd Wright”.

Don't leave after just visiting the main building of the school! The auditorium across the road is another building not to be missed. This auditorium reopened in August 2017 after a large-scale seismic treatment was completed to protect it from earthquakes. It was independently designed and built by Arata Endo. Although the interior design is consistent with the main school building complex, it feels more restrained and calm, unlike the previous flamboyance and bold display. Endo was dubbed “the disciple of Wright” for fully implementing Wright’s style. Although his works have been criticized for lacking originality, he deeply understood Wright’s architectural philosophy and more than half of his architectural masterpieces across Japan have been designated as cultural assets.

To appreciate the architectural work of Wright, a great architectural master of the century, Jiyu Gakuen Myonichikan should be the most accessible and convenient option for any visiting tourists. After visiting, you will likely learn to appreciate architectural beauty on a whole new level.