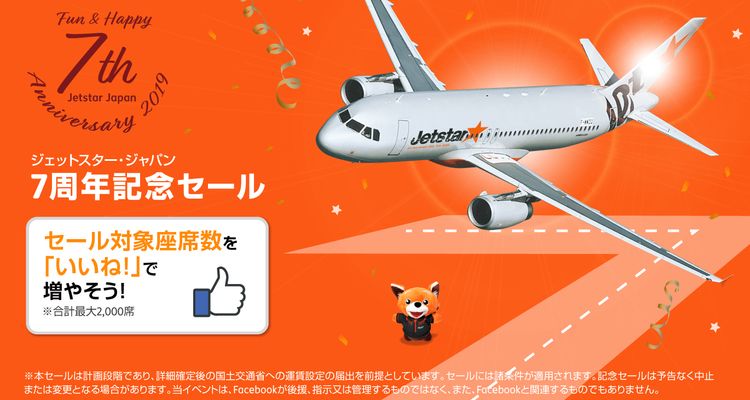 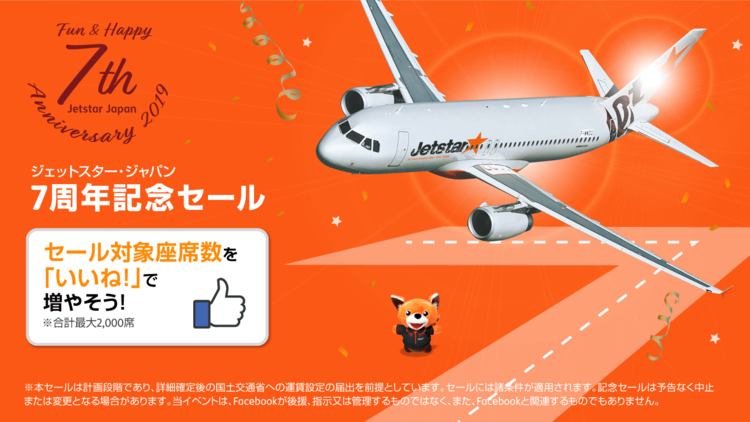 Keep an Eye Out for the Jetstar Japan 7th Anniversary Sales Campaign!

On July 3, 2019, Jetstar Japan, the largest low-cost Japanese airlines, will be celebrating their 7th anniversary with a domestic flight sales campaign! Sales details will be announced shortly, so be on the lookout - you won't want to miss out on this exclusive deal! Read on to find out more about everything that will happen on this special day!

Jetstar Japan started operating its first domestic LCC (low-cost carrier) flights in 2012, and on July 3 of this year, it will be celebrating its 7th anniversary. With 22 domestic routes and 7 international routes, it has become the country's largest LCC, and on May 13, it reached a total of 30,000,000 passengers!

In celebration of its 7th year in operation, Jetstar held a unique sales campaign in which the number of "likes" accumulated on Facebook determined the pool size - 1 like is counted as 1 seat! A post regarding the anniversary sale went up on the Jetstar Japan Official page on June 17, and the number of "likes" attributed to this post between 11:00 am on June 17 to 11:00 am on June 19 will officially decide how many seats will go up for sale (max. 2,000 seats) during this campaign! Official details, including the results of total "likes" and number of eligible seats, will be announced on the sales page on July 3.

Sales page: https://www.jetstar.com/jp/ja/deals
*The sales page will be updated a day prior to the sales campaign.

A 7th anniversary event will also be held on the same day at Narita Airport Terminal 3, in which 7 cabin crew members and Jetta, Jetstar Japan's mascot, will make an appearance! Those who participate in a commemorative photo with the crew will be gifted an exclusive Narita Airport product - a 7th anniversary notebook! July 3 will also coincide with the launch of a brand new route between Osaka (Kansai) and the Miyako Islands (Shimoji-shima) in Okinawa. To commemorate the new route, Jetstar will be giving out Yukishio Brown Sugar, a specialty product of the Miyako Islands, to passengers on all domestic flights in Japan on this day. If you're planning to fly within Japan with Jetstar on the day of the airline's 7th anniversary, you'll get your hands on some of these special brown sugar packets that the tropical islands are really well-known for!

July 3, 2019 is a momentous day for Jetstar Japan, and they hope to share this celebration with all of their dedicated passengers! Be sure to join in on the festivity, and keep checking their website for a chance at an exclusive flight with them in the future!